Singer-dancer DaniLeigh kicked off the semester at Boston City Limits (BCL), presented by the Campus Activities Board (CAB), Saturday night. BCL, which took place in the Margot Connell Recreation Center, is designed to be a successor to the former on-campus winter concert, Plexapalooza. This new concert attracted a crowd that might not have matched the size of previous years, but a difference in energy was undetectable.

The night’s theme, “Electric Soul,” married Plexapalooza’s traditional EDM-centric music with R&B and hip-hop. Alongside DaniLeigh, one of BC’s very own helped CAB to redefine the campus live music scene. Prince Lucas, MCAS ’22 opened the show, amping up and inspiring the crowd.

BCL’s “femcee,” Sherina Elibert, MCAS ’22, hopped on stage to hype up the crowd for BCL’s two artists. She then gave way for Prince Lucas to voice a message before beginning his set.

Wasting no time, the beat dropped, segueing perfectly into Lucas’ performance of his 2018 single, “Never Gon Stop.” For the entire set, the crowd reciprocated the energy that emanated from the stage, which was exuberant and contagious. Lucas kept the mood going with his other singles, including “Drina.” He lyrically paid homage to his Nigerian roots, incorporating Yoruba and inviting Elibert back on stage, where they both danced to his Afrobeat-inflected track, “Kind Love.”

DJ WattyJay kept the crowd dancing to popular national and international hits, including “Life is Good” by Future and Drake and Darkoo’s “Gangsta.”

Similar to Lucas, DaniLeigh’s setlist blended lively dance songs with slower, groovier jams. Her music is reflective of her Dominican-American ethnic background. As a dancer, she said she loves making music people can dance to, but she also admitted she can “be in her feelings” sometimes.  Her BCL set married in-your-feels music with feel-good dance music. Either way, audience members bopped their heads, two-stepped, and swayed to the music whether they were familiar with it or not.

WattyJay had day one DaniLeigh fans hold up number ones on their fingers as she came out to perform her first song, “All I Know.” She performed other songs from her first major-label EP, including, “Ex,” and BCL-exclusive previews of songs from her upcoming album—currently set to be released in May.

Entertaining both sides of the stage throughout her performance, DaniLeigh took interaction a step further and picked out a BCL attendee from the audience to hop on stage as a dance partner. She kept the crowd on its toes even with new music. Bringing out her two brothers, Kevin DeWayne Jackson II and Brandon Bill$, who are also music recording artists, she kept the crowd jumping and hyped.

The screens behind the DJ—which presented surreal visuals, such as movement through an active volcano—helped to create an immersive experience. DaniLeigh ended the night with a soulful, acoustic performance of “Easy,” showcasing her vocal range. She transitioned into the radio-released version, before ending the concert with a performance of “Lil Bebe.” Through both emotional slow jams and peppy dance music, BCL achieved its mission well with the help of DaniLeigh and Prince Lucas. The night highlighted the diversity in modern, electrifying music for the soul. 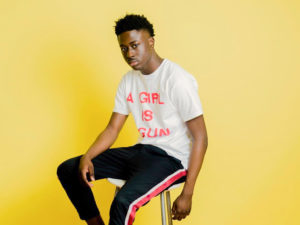