The Newton Land Use Committee postponed its decision—date to be determined—on a petition to open a dispensary at 1089 Washington St. Ascend, the petitioning company, requested for a special permit to allow the sale of marijuana and to waive the building’s lighting requirements.

Mike Ross, the attorney representing Ascend, briefed the committee on the changes to Ascend’s plan since a meeting on Jan. 27. The changes include additional parking behind the building and improving the building’s facade with botanical landscaping. The new plan would also allow delivery trucks to maneuver without disturbing the traffic, which was a major public concern. In addition, the new plan includes a 6-foot-high gate that would secure the property and limit trespassing.

The planning team showed some criteria for the City Council to consider, including the need to determine whether the dispensary will be fit for the location. Although the site is zoned for commercial purposes, it borders residential areas. At a previous public hearing on the petition, several residents raised concerns about the adverse effects that the dispensary might bring.

Amanda Caruso, a resident of West Newton, said that she is worried about the traffic impacts of the dispensary. The dispensary will be next to the Washington St @ Cross St bus stop for the 553 and 554 MBTA buses, which underage students rely on to go to school.

Caruso said that the dispensary’s presence will increase traffic tremendously and suggested that the shop reduces its operating hours and open after rush hour. She also cited Ascend’s lack of engagement with the community, saying that it had previously reached out to only three community members.

Michelle Carron, a Newton resident living close to the proposed site, also shared her concerns. She said that the store would only reserve its bathroom for staff, which might be inconvenient for the customers. Carron also said that the business should open after 10 a.m. to minimize traffic risks. The lack of a waiting area for customers would create congestion in the parking lot and, in turn, traffic, Carron said. She suggested an appointment-only system to limit the number of people waiting, which Councilor Kelley agreed to.

Councilor Richard Lipof, who presided over the meeting, discussed the concerns that the public just raised with Ross. Nearby residents feared that the 26 parking spaces that the dispensary planned might not be enough, affecting parking on adjacent streets. Ross said that Ascend will dissuade its employees from parking in neighboring residential areas and direct its customers with a traffic monitor.

Regarding public bathrooms and public trash receptacles, Ross said that it was ultimately a business decision aimed at using the location properly. He said that the rationale for not having a bathroom is to get customers in and out quicker, and the lack of trash receptacles would discourage people from opening and using marijuana immediately.

After determining that more information on Ascend’s plan is required, Lipof concluded the hearing before voting on the petition. The councilors restated to the public that Massachusetts voted to legalize marijuana and that Newton voted to have up to eight places of business that allow the sale of cannabis. Ascend will meet the Council again at a date to be determined. 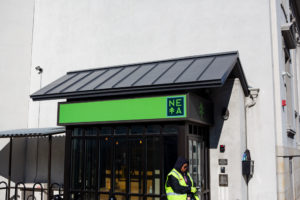 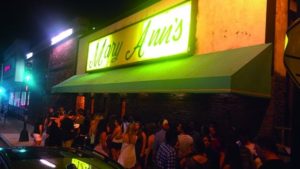