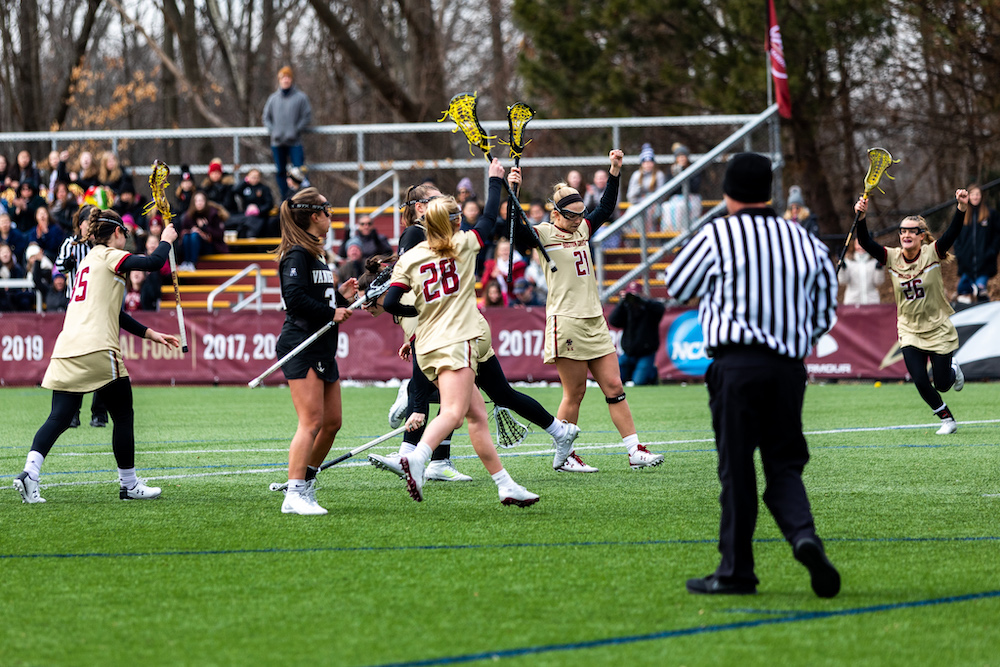 With two minutes remaining in the first half, the Eagles were up by one over visiting Brown. After an early two-goal lead for BC, the Bears had fought back to stay within one of the Eagles for the majority of the half. And yet, as the clock began to wind down, BC’s Courtney Weeks wound up for a shot that found its way into the back of the net, past Brown’s goalkeeper Erin Tucker. Weeks’ tally, her first of the season, put the Eagles up by two goals heading into the second half.

The Eagles have struggled with consistency in each of their starts so far this season, but their performance against the Bears showed an improvement. BC (3-2) began the game with an excellent defensive start against Brown (2-1). Even though the defense was a high point of BC’s play, the Eagles put forth a well-rounded performance that led to a 13-10 victory over the Bears.

While the Bears controlled the faceoffs for the majority of the half, it was the Eagles who would collect the first tally of the game. Jenn Medjid found her chance on a player-up opportunity, as Tucker was overaggressive out of the net, opening up space for Medjid to score her 12th goal of the season. Shortly after, the Eagles once again went on the offense in Brown’s end, and as the Bears’ Emily Fryer was fouled, Jordan Lappin got a chance at a free-position shot against Tucker. With a quick snap, Lappin sent the ball past Tucker and into the back of the net, doubling the Eagles’ lead.

While BC had managed to take an early lead, going up 2-0 within the first seven minutes of play, the Bears were not so quick to give up. After regaining possession midway through the half, Brown found its chance. Alaina Parisella pushed her way through BC’s defense by the net and scored on Rachel Hall, cutting the Eagles’ lead in half.

BC quickly retaliated against the Bears as Caitlynn Mossman scored her first goal of the season. The Eagles had passed the ball around and behind the net looking for opportunities to post another goal before a lane opened up in front of the net, allowing Mossman to rocket the ball past Tucker.

Three minutes later, Brown senior KC Williams went on a hot streak, quickly dismantling the Eagles’ defense. Williams scored her first goal of the game at 11:07 remaining in the half, and by 6:04 left in the half, she had netted her third goal to complete the hat trick. With the addition of Williams’ three goals to the Bears’ total, the Eagles were down 4-3 with six minutes to rally.

And rally they did. The Eagles scored three more goals to close out the half, each within a minute of the other. Medjid netted her second tally of the game to tie the Bears, then Charlotte North and Weeks each scored to regain a two-goal lead for the Eagles by the end of the first half.

But the Eagles’ euphoria couldn’t last long. Less than a minute into the second half, Claire Jeschke scored her sixth goal of the season for the Bears, cutting BC’s lead down to one. Cara Urbank quickly responded with a goal of her own three minutes later to reestablish the Eagles’ dominance. Parisella, meanwhile, had other ideas. The sophomore attacker quickly reduced BC’s lead to one before paving the way for Jeschke to tie the game up at seven goals apiece.

A change in goaltending for the Eagles came shortly after Parisella’s second goal of the afternoon. Head coach Acacia Walker-Weinstein pulled Hall to put in junior goalie Abbey Ngai for relief.

North tallied her second goal of the game against Tucker, firing a free-position shot topshelf to once more deliver the Eagles the lead over Brown. BC’s lead didn’t last long, as Maggie Fowler netted another goal for the Bears to tie the game at eight.

Quickly following Fowler’s tally, the Eagles went on a three-goal streak, distancing themselves from the Bears as Medjid, Kate Taylor, and Lappin each tallied points. Sophia DeRosa scored an eighth goal for the Bears, once again putting Brown within two points of BC, but North completed her hat trick soon after and reasserted the Eagles’ lead.

The Bears tried to pull a last-ditch effort while down 10-9 against the Eagles, with Williams rushing the Eagles’ zone to score her fourth goal of the game. But with three seconds remaining in the second half, Urbank sealed the game in favor of the Eagles, closing out the game with a final score of 13-10. Lappin’s second goal of the game, tallied at 5:14 left in the second half, stood as the game winner, delivering the Bears their first loss of their 2020 campaign.

But while the Eagles had a high quantity of shots with 33 attempts and 24 on goal, Brown had much better shot quality. The Bears were only successful in getting 12 shots on goal, but only two of those shots did not result in a tally. Had the BC defense not shot down crucial chances in front of the net, the Bears could have easily come back to tie or win the game.