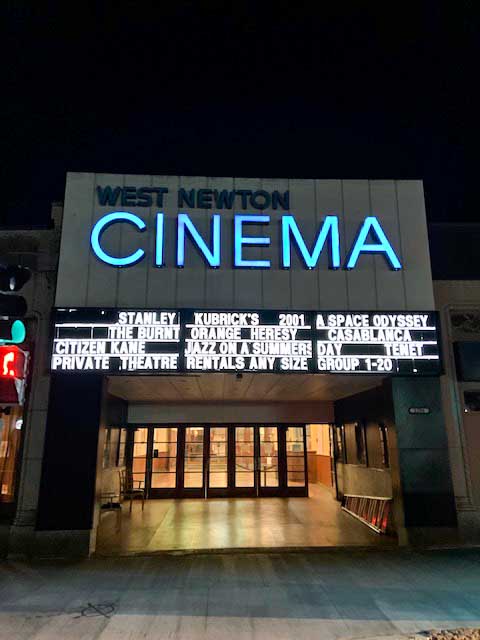 In the COVID-19 pandemic, social distancing regulations have limited the amount of people allowed in movie theaters, and the virus itself has created a sense of fear around being in an enclosed space for an extended period of time.

Despite these issues, the family-owned West Newton Cinema and Coolidge Corner Theater are working tirelessly to provide their customers with enjoyable experiences—whether by streaming movies or providing in-person viewings.

After being closed for four months, the owner of West Newton Cinema, David Bramante, was excited to open back up again and begin serving customers on July 17.

In order to guarantee the safety of movie-goers, Bramante implemented strict sanitization protocols in addition to enforcing social distancing and having employees wear gloves.

“The customers were very appreciative that we were reopened, and they were glad that we were able to stay in business and be there to be part of the community,” Bramante said.

The West Newton Cinema has been having issues attracting crowds, as people are less willing to venture to movie theaters than they were before the pandemic.

Bramante, in hopes of welcoming more customers, decreased the price of tickets. Upon first reopening, he extended a discount program offering $5 tickets, which are usually reserved for the theater’s Family Movie Night tradition.

“It’s a precarious financial situation,” Bramante said. “The theater is probably doing much less than it would ordinarily be doing.”

After the drop in ticket sales, Bramante is now the cinema’s only worker, even running the projector himself.

On March 16, Bramante’s children organized a GoFundMe to support the cinema, which raised $48,583.

Known for premiering the latest indie films, the West Newton Cinema was forced to shift the majority of its repertoire after production in Hollywood became limited, especially for smaller scale movies. The theater mostly reverted back to classics such as Casablanca and Citizen Kane, something that Bramante said he has enjoyed amid the bleakness of the pandemic.

“It’s a lot of fun to open up a show and have it start off with an old-fashioned sort of Warner Bros. Presents-type of opening for the film,” Bramante said.

Coolidge Corner Theater took a different approach—turning to online streaming of its movies instead of reopening. Within a couple of days of closing on March 13, the Brookline theater was already running virtual programming through its website.

The theater offers virtual screening rooms, where new and old independent films are shown, and virtual seminars with guest lecturers—ranging from college professors to film critics—who talk about the movies. The theater’s owner, Mark Anastasio, said that the virtual screenings provided the lecturers with new opportunities.

“The virtual realm sort of expanded the horizons for who would be able to be a guest lecturer,” Antastasio said.

One of the more prominent lecturers the theater was able to feature with its new online platform was Bilge Ebiri, a film critic for New York Magazine and Vulture, who led a seminar on The Shining.

While the ticket sales are not quite as high as they were at the box office, the virtual offerings have fared well for the nonprofit theater, Antastasio said.

With online streaming, the Coolidge Corner Theater can premiere as many as five movies compared to the one or two movies the theater would typically show at a time. The theater can also reach a broader audience with the accessibility of the online streaming, as opposed to the in-person showings, according to Antastasio.

Because of the great feedback left by customers, the Coolidge Corner Theater plans to continue with this type of programming after it reopens its doors.

“That’s been going really well as sort of a test run of how to safely interact with people coming into the building and to make sure that, you know, they’re having fun and feeling protected,” Anastasio said.

Coolidge Corner Theater is also hosting drive-in movie screenings. Throughout the summer, the workers searched for different venues that would allow them to provide for large groups of people while also following all safety precautions. They settled on Medfield State Hospital, where in September they held screenings of Shutter Island, which was actually filmed at the hospital.

Anastasio has been working hard to make sure that the theater will exceed its customer’s expectations in terms of COVID-19 precautions. In addition to sanitizing the seats in the screening rooms, Anastasio worked with a design team to install a permanent plexiglass barrier between the workers and the customers.

“It still feels very us rather than, you know, a scary barrier constantly reminding you of what’s going on,” Coolidge said.

The Coolidge Corner Theater is dedicated to building a community through films, according to their website.

“A foundation, like the Coolidge, is there to support discussions, to support education, as well as entertainment, and to really run films and programs that speak to the concerns of our greater community,” Anasatsio said.