The Screaming Eagles Keep Calm and March On

What do the Boston College head football coach, conductor of the Boston Pops, and lead singer of the Dropkick Murphys have in common? They have all been featured in the BC marching band’s ShowTime! variety shows, which are released every other Saturday. In the absence of typical game days, these variety shows have provided much-needed entertainment for the student body. The Screaming Eagles have shown that, with hard work and innovation, school spirit is possible—even if it’s from behind a computer screen instead of behind the endzone.

The road to creating these virtual shows, however, was not easy. It required cooperation, enthusiasm, and flexibility from the entire band community. According to BC marching band director David Healey, the group immediately began planning for how to approach the summer and fall once the University announced its shutdown due to COVID-19 in March.

Starting in April, student leaders held weekly Zoom meetings to provide a support system and maintain bonds between band members. Then, in July, the group shifted to interactive sectional meetings via Zoom to prepare students for what the preseason band camp would look like during a pandemic.

At the end of August, virtual band camp was held, and according to Healey, it looked remarkably different from years past. Instead of meeting all together, band students recorded their instrumental parts individually and submitted them to their section leaders. Healey was then able to compile these recordings into a polished digital version of the band’s traditional repertoire. Although he missed the in-person interaction and community, he also spoke to the silver lining of the challenges posed by the pandemic.

“It’s amazing, actually, that disruption fosters this kind of innovation,” he said. “We hadn’t had, hadn’t really been required, to look at that microscopic level of what we’re actually producing—what the students are producing.”

This technological prowess came in handy for their performances as well. For the Pops Off the Heights virtual concert, the BC marching band and University Chorale coordinated a recording of BC’s beloved fight song, “For Boston.” The group also partnered with dance team AEROdynamiK for a virtual recording of “ON” by Korean boy band BTS.

Yet the marching band’s most innovative achievement this year remains the ShowTime! variety shows that are wholly student-produced, -edited, and -written. Band members also double as actors, chefs, and talk show hosts. For perhaps the first time in BC marching band history, the student body has the chance to meet the people and personalities behind the football game fanfare. Mellophone section leader Kathryn Kelleher, MCAS ’21, discussed her and her friends’ memorable reenvisioning of the iconic Flutie Pass on their new virtual platform.

The Flutie Pass, also called the Miracle in Miami, was a Hail Mary play where the BC quarterback launched a throw downfield to wide receiver Gerard Whelan to win the game over the Miami Hurricanes. Kelleher and co. recreated this memorable scene by imaging roommates who dream of making the Flutie Pass. Aptly called the Miracle in Jammies, a pun of the original event, the skit features Kelleher and her fellow band members doing their best Flutie Pass impressions around campus.

In addition to providing a creative outlet for band members, as Kelleher discussed, trumpet section leader James Sixkiller, MCAS ’22, emphasized the goal of the variety shows. They hope the shows offer a refuge of normalcy in these upending and turbulent times.

Sixkiller also noted how Healey continually emphasizes the importance of community to the band and how he envisions the group as a family. Coming from Louisiana, Sixkiller noted how Healey helped him adapt to a new environment and adjust to life on campus. Specifically, Sixkiller cited the tea times Healey held individually with students as opportunities to reflect on and openly discuss the highs and lows of their BC experiences.

“And [the tea times were] super, super valuable to me, especially freshman year, when I was adapting to everything,” Sixkiller said. “I think it’s just his personality in being a friend and being someone who genuinely cares.”

Indeed, Healey’s care for his students is perhaps more vital than ever. At the time of the interview, because BC had not yet announced its Thanksgiving plans, Healey ensured students that they would have a place to celebrate and share a meal together.

This was not just a heartfelt gesture, but a sincere invitation. Sixkiller said that Healey has repeatedly invited him over for Thanksgiving. Sixkiller said he greatly appreciated the sentiment as it is often difficult to go all the way to Louisiana over the short holiday break.

“That’s his personality and I think that’s really rare to find,” Sixkiller said. “And it’s only amplified by him being the director of so many kids from all over the place with so many backgrounds.”

There is a mutual respect and understanding between Healey and the band members that comes across not only in the students’ words, but in his own. Healey praised students for overcoming adversity and remaining committed to the program.

“Well, they’re incredibly flexible,” Healey said. “One of our main mantras in the band is ‘be flexible and adapt to change.’ And that’s been tested this year, I think, to a greater extent than any previous year.”

Healey, Kelleher, and Sixkiller all agreed that this challenging process has allowed them to explore some innovative techniques that they will employ in the future—whether it be filming variety shows or recording individual student performances to hone the band’s sound.

Nevertheless, Healey admitted that what he misses the most about normalcy are the countless memories made on game day. Specifically, he is anxious to get back out on the football field where the band can show passion, commitment, and school pride. For Healey and the band, football games are an opportunity to make alumni and spectators proud of the BC community.

“You go in and you’re expecting to see a football game, but you come back with the impression that this is a real strong sense of community and it’s student-driven,” he said. “And there’s just this authenticity to the experience that is truly reflective of Boston College.”

For Kelleher, a memory that stands out was the band’s trip to the Pinstripe Bowl in 2017. Despite the freezing temperatures, Kelleher enjoyed her first bowl game experience and having the opportunity to perform in Yankee Stadium. The trip also included an overnight stay in New York City, where the band members were able to develop connections and spend meaningful time together, Kelleher said.

And for Sixkiller, a special tradition that stands out is the group’s pregame ritual. Prior to running out on the field, the band members link arms, form a circle, and sing “Amazing Grace.” Sixkiller notes that it is an emotionally vulnerable moment and one that exemplifies the tight-knit community of the Screaming Eagles.

All in all, the students have exhibited an unwavering commitment to the band according to Healey. It is their perseverance and mutual supportiveness in the face of adversity that has made the community so special to Kelleher, Sixkiller, and Healey.

“I am constantly impressed with the students,” Healey said, “I think they’re amazing. And their resilience is inspiring to everybody on our staff.” 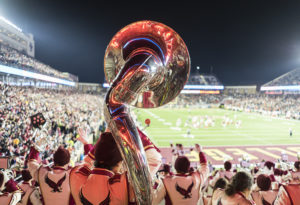