‘Women Take the Floor’ Highlights Diversity in the Art World

Can you name five women artists?

“I’m embarrassed to say this, but absolutely not,” museumgoer Cinthia Campos, from Miami, Fla. said. “I can name men though.”

This question is displayed by the entrance of the Women Take the Floor exhibition at the Museum of Fine Arts, Boston, prompting attendees to consider the lack of female recognition in the art world.

This exhibit showcases the underrepresented work of 20th-century American women artists, featuring over 200 pieces by artists of different backgrounds—African American, Asian American, Latin American, and Indigenous, according to the MFA website.

“I don’t usually get to see an exhibition with all women’s pieces,” McKenna Judd, an art student visiting from Texas, said. “It’s encouraging to see that there are so many strong women I can learn from.”

The works are drawn from the MFA’s collection and are categorized into seven galleries, separated by room according to theme.

These include “Women on the Move: Art and Design in the 1920s and ’30s,” “No Man’s Land,” “Beyond the Loom: Fiber as Sculpture / Subversive Threads,” “Women Depicting Women: Her Vision, Her Voice,” “Women of Action,” “Women Publish Women: The Print Boom,” and “Women and Abstraction at Midcentury.”

“I love the impression that each room gives,” Judd said. “When I walked into each one, I just felt women’s power. They all share that atmosphere.”

“Beyond the Loom: Fiber as Sculpture / Subversive Threads” builds off the historical use of textiles, challenging notions of gender roles and identity. The pieces are made with multiple mediums including cotton threads, yarn, beads, fabric, aluminum wire, gilded threads, linen, and polyester crepe. These works are meant to question mainstream assumptions about women’s roles in the household by turning the acts of spinning, weaving, knitting, and quilting into activism.

“Protest Print Coat” (2007), made by Erin Robertson in collaboration with Jordan Piantedosi, is a coat made with cotton and polyester crepe. It directly addresses contemporary political issues through the use of the embroidered text alluding to an era of activism and protest in the 1960s and 1970s, according to a plaque displayed at the exhibit. 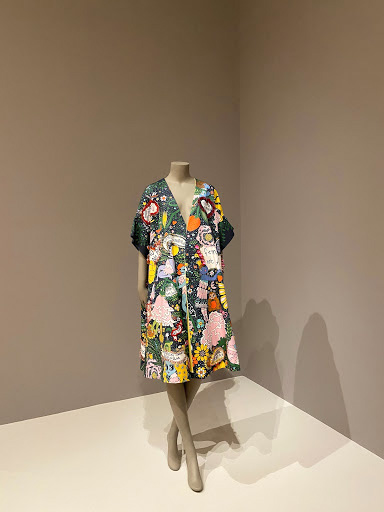 “I find the themes explored in many of the pieces really relevant to what women face today,” Brynn Perkins, a visitor from Oklahoma City said. “We are still dealing with some of the same obstacles from decades ago.”

“Women Depicting Women: Her Vision, Her Voice” also tackles contemporary issues, showcasing images of women created by women, many of which focus on activism, diversity, and political commentary.

“Save the Post Office” (2020) by Lopi LaRoe (LMNOPI)—a work found in this section and made with inkjet print on poster—illustrates an African American woman superimposed in front on a map of Vermont’s Mountain National Forest, where she works for a post office, according to a plaque displayed at the exhibit. 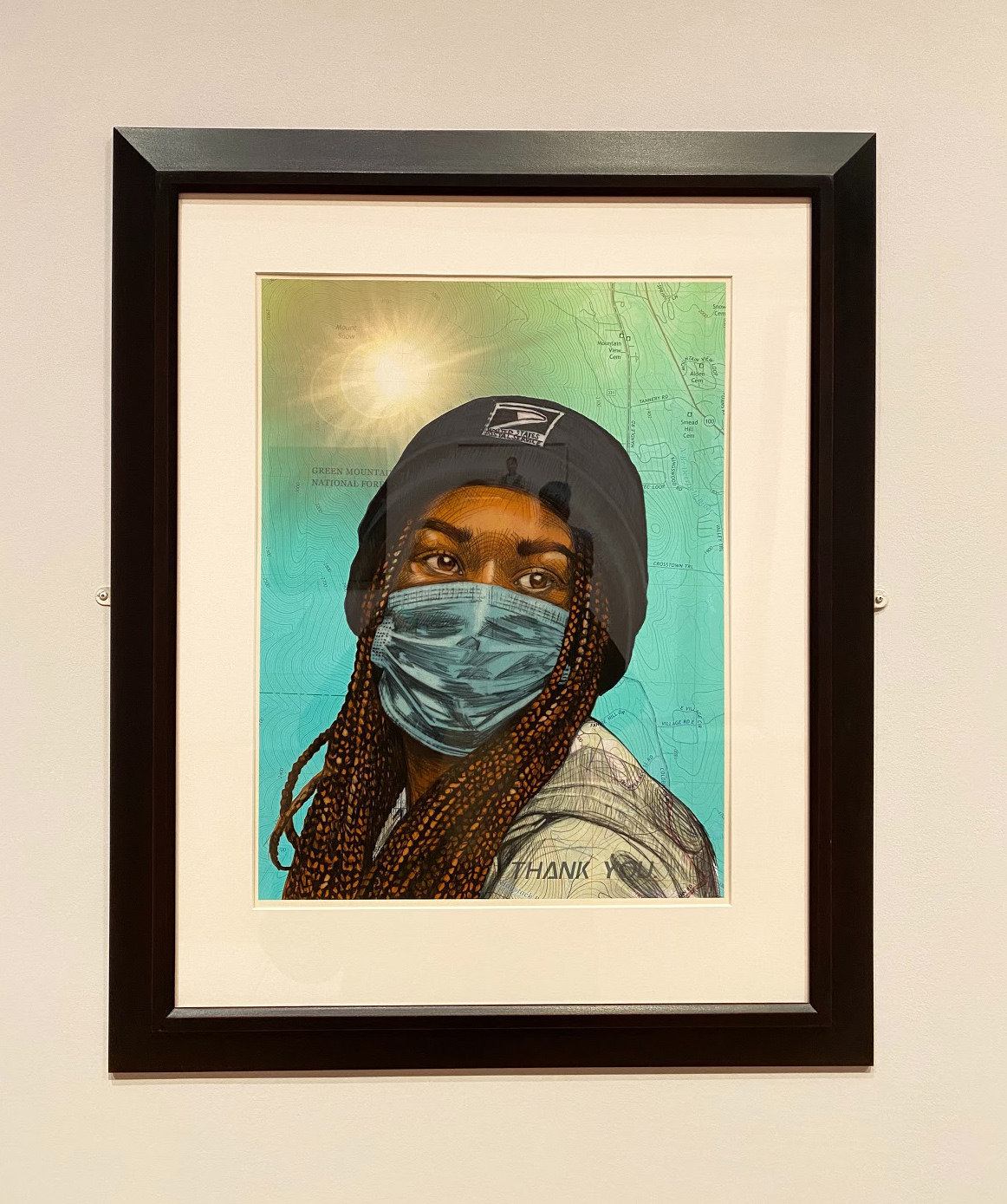 “I’m amazed by how quickly the museum incorporated a present-day issue into the exhibit,” Campos said.

According to a plaque displayed at the exhibit, this print is a homage to frontline workers during the COVID-19 crisis.

“I really like [LaRoe’s ‘Save the Post Office’] because it is thanking frontline workers and addressing the pandemic,” said Perkins. “It’s dealing with a social justice issue going on today.”

Women Take the Floor, which will be on display until Nov. 28, illuminates the talents of many female American artists, whose merits have not received as much recognition in the past, and emphasizes both diversity and contemporary issues.

At the end of the exhibition, there is a space for reflection and feedback. Guests are invited to write or draw their thoughts about the exhibit on a piece of paper, which is later taped on the wall.

“All my art professors in college were male, but all students studying painting were female,” Judd said. “I think the art world is changing.”