BC Signs Historic Apparel and Footwear Deal With New Balance

Just before he departed from Temple, Athletics Director Pat Kraft and his department finalized a three-year deal with Nike. Now, Kraft has made another major deal, this time between Boston College and New Balance.

“This partnership will be an absolute game-changer for Boston College athletics and our student-athletes,” Kraft said in a statement. “This is not just a historic deal in terms of the financial value and amount of apparel for our department. The opportunities for our student-athletes to assist in product design and development of the footwear and apparel they will actually wear and compete in will be transformational.”

BC athletics has finalized a 10-year deal with New Balance to become the “Official Footwear and Apparel Provider” for the Eagles, beginning June 1, 2021. It is the largest footwear and apparel agreement in BC’s history, and it will give Boston-based New Balance the rights to provide uniforms, apparel, and footwear for 30 of BC’s 31 varsity sports. BC football will not be a part of the deal, according to Senior Associate Athletics Director for Communications Jason Baum.

“This progressive collaboration joins two world-class Boston-based teams with strong synergies at our core and enables a broad spectrum of initiatives that will drive innovation, performance and creativity,” Ray Hilvert, vice president of global team sports at New Balance, said in the statement.

The deal will also grant select BC teams access to the [email protected] Balance, a state-of-the-art sports complex at Boston Landing featuring a 200-meter track, seating for over 5,000 spectators, and various facilities for training and recovery.

New Balance recently tried to revitalize its basketball line with the signing of Kawhi Leonard and about a dozen other NBA players. As the company continues the growth of its basketball brand, a key element of its partnership with BC will be investment in both the men’s and women’s basketball programs.

“I am excited because we won’t just be part of this deal—we will be partners,” BC men’s basketball head coach Earl Grant said in the statement.

“The best part of this new partnership will be our players having a part of the innovation, development, and design of the apparel they will wear for both practice and competition,” Bernabei-McNamee said in the statement. “We can’t wait to show our players and recruits everything New Balance is able to provide us with.”

New Balance, headquartered in Boston, has grown exponentially since Jim Davis bought the company in 1972, and it provides the Eagles with a local partnership. BC has already begun to circulate the catchphrase “For Boston, From Boston” on its social media pages.

“This is a unique opportunity for us to align with a Boston brand that understands our teams and our city,” BC men’s hockey head coach Jerry York said in the statement. “Jim Davis has been a longtime fixture in the Boston business community, and we look forward to a lengthy partnership with New Balance.”

Under Armour, BC’s previous apparel supplier, has faced financial troubles in recent years. Due in part to the COVID-19 pandemic, Under Armour has had to make cuts in its partnerships, starting with UCLA under former BC Athletics Director Martin Jarmond. Under Armour recently informed UCLA that it wants out of the $280 million, 15-year deal it signed with the school in 2016, according to The Boston Herald.

BC’s partnership with Under Armour began in 2010—well before UCLA’s—under then-Athletics Director Gene DeFilippo. Then, in 2015, DeFilippo’s successor Brad Bates signed a contract extension with the apparel company that extends through the 2023-24 school year.

But news of the transition away from Under Armour began to swirl over the summer.

“We have been in discussions with Under Armour regarding our current agreement to supply our athletics department with apparel and footwear,” BC’s then-interim Athletics Director JM Caparro told The Boston Herald back in June. “We will continue those conversations with the primary focus on doing whatever is best for our student-athletes and athletics department here at Boston College.”

The deal will allow for creative freedom and collaboration between athletes, coaches, and New Balance in designing shoes and apparel.

“Our players will work with New Balance during the process of developing and designing our uniforms, shoes, and apparel,” Grant said in the statement. “This deal gives us tremendous freedom to customize all of our apparel and experience the next-level quality and innovation that they have to offer.”

Featured Graphic Courtesy of BC Athletics 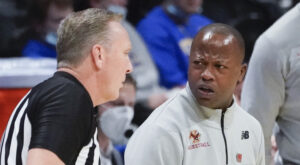 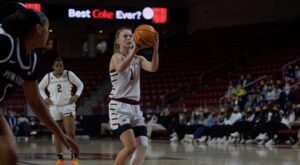