The Boston College softball dugout waited with bated breath as Elisabeth Laviolette stepped up to the plate and gazed out at teammates Ellie Mataya and Djhane Valido stationed on first and second base, respectively. The Eagles found themselves in an eighth-inning standoff with Louisville, and an RBI by Laviolette sealed the deal on BC’s fifth straight win on Saturday.

The freshman, recently added to the lineup, delivered, as she crushed a perfectly placed ground ball up the middle of the field. Valido flew around third base and deftly dove around the outstretched glove of Louisville catcher Rebecca Chung toward home plate, securing a walk-off 5-4 win for BC. Chung could only look on in astonishment as the Eagles rushed to mob their late-game heroes.

ACC opponents BC (13-27, 8-19 Atlantic Coast) and Louisville (17-25-1, 11-19-1) battled it out in the second game of a four-game series at BC’s home field in Brighton. With their fifth straight win, the Eagles are on a hot streak as they near the end of their regular season.

BC’s bats were quiet through the first two innings, with the Eagles only recording three hits in the first two frames. Louisville, on the other hand, got on the board early in the game, as Celene Funke stole third and ran home on a Jenna Servi single.

BC’s Nicole Giery made sure the Cardinals’ lead was short lived. In the third inning, Giery recorded her first career home run in spectacular fashion, blasting a drive over the left-field fence to a chorus of cheers from her teammates.

The moment the ball left Giery’s bat, there was no question it was going out of the park. BC head coach Amy Kvilhaug tracked the ball and immediately began motioning for the on-base runners to come home, and Giery was mobbed by a small cohort of teammates as she crossed home plate.

Laviolette and Mataya ran home on Giery’s drive, and the Eagles took a 3-1 lead. Just a few at-bats later, BC found itself with two outs and the bases loaded. AJ Alatorre was hit by Louisville relief pitcher Jennifer Leonhardt, and Emme Martinez scored an easy run to extend the Eagles’ lead by one.

Louisville’s Funke showed her stealing prowess once again as she stole second after slotting a single up through left field. Moments later, Servi delivered once again, and Funke ran home on her single. Two fly outs and a foul out meant the Eagles recorded zero hits through the fourth inning.

BC’s offensive troubles continued into the fifth frame, and Leonhardt and her defensive corps prevented the Eagles from earning a hit once again. Martinez and Gianna Randazza flied out, and Gianna Boccagno struck out at the plate.

Through her defensive efforts at second base, Giery proved her mettle as a two-way player. In the top of the sixth, she laid out to make an acrobatic diving stop, neatly snagging what was sure to have been a base hit for Servi. Still on the ground, Giery shoveled the ball to Kennedy Labshere, who easily picked up Servi’s out at first.

Despite Giery’s defensive heroics, Louisville picked up two runs to tie the game after a drive by Taylor Roby was lost in the sun. Maddy Newman and Carmyn Greenwood capitalized on the error and ran home.

Neither team recorded a hit through the seventh inning, and as such, the game was to be decided in extra innings. BC pitcher Susannah Anderson coolly closed out the top of the eighth with three Louisville runners left on base, and it was Laviolette who delivered the dagger to lead her team to victory. 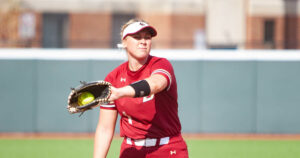