Eagles Fall To UMass In Shootout

An in-state rivalry game is sure to draw fireworks, especially when it’s between two nationally ranked teams with practically identical records. It’s just a question of how big those fireworks will be. Between No. 10 Boston College field hockey and No. 21 UMass Amherst, the fireworks were about as much of a spectacle as they could be.

After a tough-as-nails regulation, two overtime periods, and a shootout, UMass emerged with a hard-fought 3–2 victory after winning the shootout 8–7. BC led 2–0 after the first half, but a late surge from the Minutewomen handed BC its third loss of the year.

“I think we started out really well, with some players playing different positions and we got one on the board early on,” BC head coach Kelly Doton said after the game. “We just keep letting these teams back into these games that we’re controlling. It’s a tough loss.”

BC’s first goal came off the stick of Milagros Arteta in the first quarter. It marked her sixth goal of the season, and Jill Joossens earned credit for the assist. Just 13 minutes later, Sky Caron gave the Eagles a more comfortable lead on a goal from a penalty corner, putting the Eagles up 2–0 early.

But as the saying goes, a 2–0 lead is one of the most dangerous leads in sports. The Eagles’ defense held strong all the way through the second quarter, but it didn’t take long for the Minutewomen to get one back in the third quarter.

The wheels began to fall off for the Eagles when UMass defender Katie Samaranayake scored off an assist from midfielder Amelie Green 40 minutes in. Green sent a penalty corner to Samaranayake, who buried it behind BC goaltender Jonna Kennedy for Samaranayake’s first goal of the season.

Still, BC was nursing a narrow lead, and the minutes had begun to wane. But with less than a minute remaining in regulation, a goal off the corner from junior midfielder Jess Beech sent the game into overtime.

“We’ve been letting in way too many goals and allowing too many fast breaks, so our defense was the focus all week,” Doton said. “We gave them too many corners and they scored off of them.”

After two scoreless overtime periods, the game went to the deciding shootout, and UMass midfielder Georgie McTear buried the eventual game winner in the eighth round.

The teams were about as statistically even as they could have been. Both UMass and BC finished with 15 total shots, and BC only narrowly edged UMass in shots on goal, 10–9. The difference maker was corners, as UMass earned seven penalty corners to BC’s three.

With games against No. 14 Virginia, Richmond, No. 3 Louisville, and No. 9 Saint Joseph’s on the horizon, BC’s road won’t get any easier.

“Tough games. Tough games. We have no easy games on our schedule,” Doton said. “In the ACC, we’re 0–2 right now and then we go up against another great non-conference team, so we gotta be ready.” 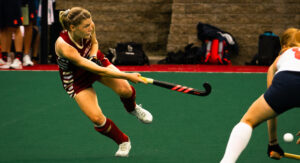