The Wolfpack throttled Boston College on Saturday after a dominating second half in which they scored 23 unanswered points on the back of quarterback Devin Leary’s three touchdowns. No. 18 NC State is undefeated at home this year, but its only previous road game, a loss to Mississippi State in Starkville early in its schedule, cast doubt on the Wolfpack’s hopes of national relevancy. This big conference win on the road puts them in strong contention to compete for an ACC title and possibly a big-name bowl game with a fairly light schedule the rest of the way.

Wake Forest was seldom talked about going into the year, but six games into the season, it’s the only remaining undefeated team in the ACC. The No. 16 Demon Deacons’ last game—a three-point overtime victory over Syracuse two weeks ago—did not inspire confidence, however. A trip to the Carrier Dome to play the Orange should have been an easy win for a team on a roll like the Demon Deacons, but they scraped by with a 40–37 overtime win. Sam Hartman threw for 330 yards and three touchdowns, but an inconsistent 59.4 percent completion rate combined with continued struggles on the ground led to a close game. A challenging stretch of NC State, Clemson, and BC awaits the Demon Deacons as their final three games of the season, but games against Army and Duke should give the Demon Deacons time to refocus.

Pitt has ridden its Kenny Pickett-led offense all year, but its defense and sophomore running back Israel Abanikanda came up clutch against Virginia Tech this week. Pickett had his worst game of the season thus far, only mustering 203 yards through the air and letting his completion percentage dip below 66 percent for just the second time this year. Luckily for Pickett and No. 18 Pitt, Abanikanda had his best game on the ground, averaging 6.7 yards per carry for 140 yards. Most of the other contenders for the ACC Coastal crown already have multiple losses on the year, so the Panthers should have a strong chance to make the conference championship as long as they can fend off Clemson at home this Saturday.

The Cavaliers dominated every part of their 48–0 win against Duke to secure their second shutout win of the year. Quarterback Brennan Armstrong dominated with 364 passing yards, and UVA’s defense forced four turnovers. A bevy of running backs combined for 164 yards on the ground. UVA has a very tough schedule down the stretch following two home ACC contests against Duke and Georgia Tech. Games in Provo against BYU, at home against Notre Dame, and back on the road in Pittsburgh await UVA.

Clemson handed Syracuse its third straight three-point loss on Friday in a defensive struggle not unlike the Tigers’ previous contest against BC. Quarterback DJ Uiagalelei continued his season-long struggles, as he failed to break 200 yards passing for the fifth time this year. Neither team played particularly well, with 137 combined yards of penalties and both teams converting just a third of their third downs, but a missed field goal with under a minute to play sent the Tigers home with a win. Dabo Swinney will have to find a way to score points against a high-powered Pittsburgh team this week.

The Eagles suffered their second loss in as many games, most recently at home against NC State. An 0–2 start to conference play will all but end the Eagles’ chances of winning the ACC title this season as they play in the stacked Atlantic Division. In a year where the ACC is wide open, the loss of quarterback Phil Jurkovec against UMass seems to be haunting the Eagles, as their offensive play simply hasn’t been the same since he went down with a wrist injury.

Next Up: at Louisville, Saturday, 4 p.m.

The Cardinals did not play this weekend, but after two straight close losses to Wake Forest and Virginia, they will come into their Saturday matchup against BC hungry for a win after using bye-week adjustments. Cardinals quarterback Malik Cunningham is one of the top quarterbacks that the Eagles have faced this season, so their matchup on Saturday should be a telling game as Louisville tries to move back above .500.

Quarterback Sam Howell only managed 154 passing yards against a much weaker Miami team, and UNC committed 10 penalties totaling 102 yards. Winning the turnover battle 3–1 was the main reason the Tar Heels escaped with a three-point win. They have by far the toughest remaining schedule in the ACC after a bye week this week, with road contests in South Bend, Pittsburgh, and Raleigh still on the table.

The Hokies struggled against a strong Pittsburgh team on Saturday in just their second ACC contest of the season. Hokie quarterback Braxton Burmeister only completed 34.4 percent of his passes and threw an interception. Virginia Tech’s third down conversion rate of 28.6 percent also limited the Hokies. Holding Pitt to 28 points, its lowest total this year, is a positive sign, however, as the Hokies host Syracuse this week. Virginia Tech doesn’t have any more games against a currently ranked team left on its schedule.

The Yellow Jackets eked out a close win against Duke in which quarterback Jeff Sims led the team in both rushing and passing yards. He also closed the game out with a clutch 36-yard touchdown pass to Adonicas Sanders. Corner Juanyeh Thomas picked off a Duke pass to seal the game and bring the Yellow Jackets to .500 in both overall and ACC play. Georgia Tech has had an up-and-down season, so its place within the ACC has been unpredictable. A couple tough games down the stretch against No. 13 Notre Dame and No. 1 Georgia should provide some answers to the questions that the Yellow Jackets’ play has been asking throughout the season.

After a rocky start to the year, the Seminoles are on a two-game winning streak, with both of those wins coming in ACC play. They had a bye last week and face UMass this week, which should give them time to prepare for a tough two week stretch against Clemson and NC State. The Seminoles have virtually no chance of reaching the ACC Championship, but if they can continue this winning streak, they may have a shot to sneak into a bowl game in a year where they looked doomed after four games.

The Orange had a promising 3–1 start to the year in non-conference play, but they have now lost their first three ACC games, each by three points, including against Clemson this week on a missed last-second potential game-tying field goal. Syracuse’s run game continued to look sharp, as quarterback Garrett Shrader and running back Sean Tucker have combined to rush for 733 yards over their last three games, even though they lost all three. These close calls against competitive teams have inspired some confidence in a team that many did not have confidence in to begin the season.

The Hurricanes have continued to disappoint despite lofty expectations going into the season. With their starting QB D’Eriq King out for the year with a shoulder injury, backup Tyler Van Dyke stepped in against UNC. His three interceptions were the difference in a three-point loss. His final interception came on a third down with under a minute to play within field goal range, a crucial mistake by the inexperienced signal caller. Miami’s matchup against the red-hot NC State Wolfpack will prove whether Van Dyke’s struggles were just first-game nerves or not.

It is quite difficult to draw any positive signs from Duke’s 48–0 clobbering at the hands of Virginia. Running back Mataeo Durant only managed 82 yards, just his second sub-100 yard performance of the 2021 campaign. Quarterback Gunnar Holmberg threw two picks and no scores, and Duke’s defense gave up 528 total yards. The Blue Devils committed eight penalties for 85 yards, 60 more than UVA. This loss extends Duke’s losing streak to three after a 3–1 start to the year. 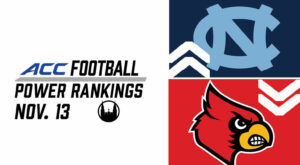