Home » ‘The Hundred Foot Journey’ Presents A Taste of Life 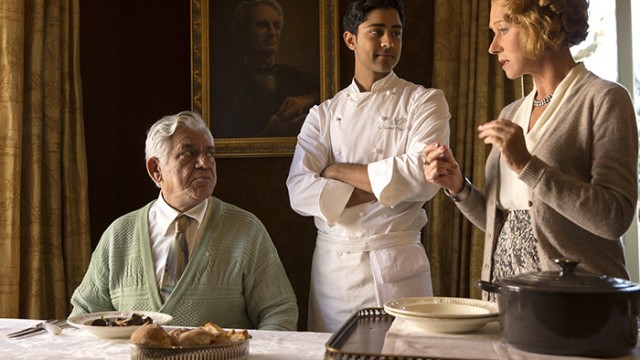 ‘The Hundred Foot Journey’ Presents A Taste of Life

Like Chocolat (2000) and No Reservations (2007), The Hundred Foot Journey—directed by Lasse Hallstrom—is a melodramatic comedic film centered on food, love, and family.

The story follows the Kadam family and their recent exodus from the their Indian home and restaurant due to political turmoil that ended the life of the Kadam matriarch. Mother Kadam taught all she knew of cooking to her gastronomically gifted son Hassan Kadam, played by Manish Dayal. After the family’s short stint in London, the father (Om Puri) drives through southern France and serendipitously ends up in a town that has an abandoned restaurant ready for sale. The caveat? A hundred feet away is a Michelin Star restaurant, owned by the seemingly cutthroat and pretentious Madame Mallory (Helen Mirren), and Hassan’s love interest (Charlotte Le Bon) is the rival sous chef.

Hallstrom has perfected his food filmmaking technique, which started in Chocolat. He can transform food from a necessity to one of the most revered aspects of human activity, whether it is mixing spices in a sauce or kneading bread before baking—a sort of food pornography that seems more enticing than a leaked photo of Jennifer Lawrence. Yet, Hallstrom still further proves that the art of cooking transcends the actual physical act and is also an extension of human emotion. The grill lit on fire is a manifestation of both attraction and rivalry.

There is dynamism in Hallstrom’s filmmaking, even when the subject is so static. When Hassan cooks in a tent outside in the rain near Heathrow, a plane flies by overhead. A hesitant director would focus on controlling the mis-en-scene as if it is his or her own little universe that will only work when a stimulus is applied. Hallstrom allows the environment and surroundings to direct the action. A plane flies overhead, which, in a delayed reaction, creates wind that pushes the collected water, causing water to collapse his tent and fall on a grill of fresh kebobs. This action-reaction-reaction sequence is the filming equivalent of a Rube Goldberg machine, and only very capable directors have the ability and foresight to create such energetic scenes.

Hallstrom’s directing style also shows original takes on classical Hollywood, which is a palate cleanser for the saturated amount of cliched “rock thrown on girl’s window scenes.” The Hundred Foot Journey falls short of any iconic status, however. It is first and foremost a melodramatic romcom. The multiplicity of genres leaves the film in internal confusion-creating contradictory moods, which seem to climax in multiple instances throughout the film. This does not help the plot, which is relatively simplistic.

The Hundred Foot Journey’s primary purpose is to be a feel-good movie. It does not fail in that category. The young lovers, played by Drayal and Le Bon, are more than believable, though the two main characters are not the strength in this film.

The vitality of the film stems from the most common denominator of human experience: food. Food is a part of the mundane and a part of the extravagant, a part of familiar experience and a part of strange new exploration. The film contrasts the rich and powerful Indian home cooking to the subtle and refined French cuisine.

There is no better analogy for life. The home is full of spice and familiarity, while the public restaurant is a strange new environment that is filled with different faces and varying dishes. The experience of food is more than just three meals a day—food is one of the fundamental mediums of interaction, and denying it a permanent genre is not only a transgression against cinema but also a transgression against the human experience.