While Off Broadway, Clyve Sets Scene for Aspiring Thespians

Scott Clyve, one of this year’s Rev. J. Donald Monan Professors in Theatre Arts at Boston College, has over 30 years of experience in the field of production design. He’s worked for Pope Francis, former President Barack Obama, Nicki Minaj, Coldplay, Jason Aldean, Lil Wayne, and Kanye West. He’s worked on Broadway and Off-Broadway shows, The Nutcracker, The Urban Nutcracker, operas, and tours both regionally and nationally, and he most notably was asked to consult on lighting the popemobile, the only car that has ever actually mattered.

Clyve got the bug for production design when he was 15 years old, and shadowed a lighting designer at a play his mother was producing in Bangor, Maine. The designer got in a fight with the director, and it didn’t end well, as those things tend to not end well. Since the designer was the only designer in Bangor– not a city known for having plenty of lighting designers—Clyve stepped into the void.

“They looked at me and said, ‘Did you pick anything up? Do you want to try it?’ And the rest from there is history,” Clyve said. “The reviews in the paper were ‘Some of the best lighting Bangor had seen,’ I was hooked, and from then on this is what I’ve been doing.”

Clyve specializes in lighting design, but has extensive experience with set design, production management, and production design as well. He credits his diverse skill set as the reason he’s still so passionate about everything he does.

“What’s great is I don’t just do theatre. I do TV, I do events,” Clyve said. “I’m called to do things every day that are just completely off the wall and you’d be like, ‘Really? You really want me to come do that? Okay, sure.’”

No two jobs for the show business veteran are the same. Clyve does admit that there was one moment where that wasn’t the case.

“There was a time, I do remember, about five years ago, I was in a ‘Okay, I feel like I’ve hit a plateau, what’s next,’ … And then the Pope came along. It was actually Nicki Minaj came first, and then the Pope came directly after that. It took me down a different road,” Clyve said.

He explained that the different jobs he has each provide a different sense of satisfaction. When he’s in charge of lighting, the audience is wowed over the course of the show, realizing the impact Clyve has had by the time the curtain falls. When he’s the set designer, he can get that reaction when the audience walks through the doors, but he doesn’t find it quite as impactful. When it comes to production design, that’s all behind the scenes work that serves as a means to an end. Clyve does it, and he is good at it, but the audience reaction is what he works for, which he can only get from his other two capacities.

Clyde’s life philosophy came from his two children, who have made him realize the importance of relationships and value every person he encounters. Clyde looks at the world’s population as a pastiche of stories.

“I love to listen to people’s stories, I love to listen to what they went through, and I meet about 800 people a year,” he said. “Do I hear all their stories? No, but I do hear a lot of them, and I feel like you get connections that way.”

Clyve tries to take a lesson or memory away from every conversation. If he never stops learning, he can never fall behind—he learns from stories.

While he was in college, a professor told him that back in the day, people who tried to get into the design union had to go through a test where they had to hang lights with members of the union.

“They’d go into the theater, hang it with a union crew, and the union crew would tell the judges if they thought you’d failed or not. That was usually done by banging the genie [a type of lift].”

On his first broadway production at age 26, Clyve began hanging lights with a union crew, and one of the union members banged the genie—Clyve describes himself as looking like a green 12 year-old with no clue what he was doing. He turned to the union guys and asked them, “Do I pass or do I fail?”

From then on, they gave him all the respect in the world.

Eight years ago, BC brought Clyve in to light Metamorphosis, and the relationships the designer forged kept him coming back. A few years ago, he taught his first class, subbing in for a professor’s computer aided drafting class, and it gave him a teaching bug he hasn’t been able to get rid of since. Clyve has spoken and taught master classes at multiple universities and sat in on meetings to help productions out with his extensive backlog of experience providing the background for all of his advice.

“I wanted to see if this would be something I’m good at,” he said. “Helping to spread the knowledge of what I’ve done—and just how the hierarchy of the business works—passing that down is a good feeling.”

He became one of the Rev. Monan professors—visiting positions donated in honor of Monan, a former University president and chancellor, beginning in 2007—at the start of this academic year. This semester, he is teaching a couple of classes: the computer aided drafting and design class that originally got him into the classroom and an entirely unique course called Event Design and Organization.

“The class isn’t just about the theatre world,” Clyve said. “It’s about the organization part of production management. The students know theatre. In theatre, at events, there’s sometimes ‘found spaces.’ What this class is going to do is teach them how to go into a space, and first of all learn about the space—learn about where it comes from, why it’s there—and then build a show inside it from the bottom up. How to do budgets, how to design a set, how to work with unions, all of those pieces.”

Clyve explained that he’s never heard of or seen another class like it. It isn’t taught out of a textbook, and it shouldn’t be—no native space is the same, no problem that needs to be solved identical within a space. It’s the perfect experience-based look at how to improvise in order to improve or fix an event. He believes improvisation is a big deal—thinking on your feet can’t be taught out of a book.

“One of the big things I teach is the what-if game,” Clyve said. “The first question I asked was what if you’re a stage manager and somebody has a heart attack during your show, what do you do? Are you going to think about that beforehand or are you going to think of that on the spot?”

He went on to disclose that when people are hiring in show business, what makes candidates stand out is how well their shows have done. Being a part of a show that tanked, even if it isn’t necessarily a candidate’s fault, can really follow members of the show business community around. Learning the skills Clyve has honed over his career helps students and professionals alike avoid those pitfalls.

His teaching philosophy is unique as well. Due to his schedule, the classes he teaches are once a week—one is two hours, the other two and a half. That can lead even the most passionate of students to some moments of boredom. Clyve identifies this as one of his tougher challenges to deal with as a professor.

“As you can tell, I love to tell stories, so if I get to a certain point and I’m like, ‘Okay, I’m starting to lose people,’ I’ll tell a good story—maybe it’s related maybe it’s not—but it gets the juices flowing again and then back onto the lesson,” he said.

Being passionate about something doesn’t mean it’s awesome 100 percent of the time. Clyve’s mission is to encourage that passion, not dampen it because there’s a lot of information he needs to teach his students. He even has a backup plan for if he misses class. Typically, students would probably prefer to see class canceled, but in a two-hour class, time in the classroom is especially vital to getting the most out of the course. Clyve always has a backup plan: If he has to go to an event, he has a Skype system set up and ready to go—that way when class-time rolls around, he can Skype in and show his class the intricacies of an event set up. It’s as close to on-the-job training as a student can get in a classroom.

What’s Clyve’s favorite part of teaching at BC? When he was asked, he leaned into the microphone carefully and said, loudly and clearly, “THE STUDENTS.” Despite his ironic-delivery, he means it.

He loves seeing the passion in his students, and loves watching them be astounded by the learning process. Clyde gets to watch minds grow.

Clyve isn’t short on general advice either. When he was first starting out in New York, he had essentially zero connections to the business, and any paycheck he was cashing couldn’t possibly cover the rent for his apartment. So for a year, he asked every director he worked for to tell 10 people about Clyve’s work in addition to the $300 check the designer would get for the week.

By the end of the year, his name was associated with great work, and his career began to take off.

“80% of what you’ve done and what your resume is gets you the job. 80% of who you are is what keeps that job time after time after time,” he said. “It’s why they call you back. So yes, you have to be good at your work—you have to say to somebody, ‘Yes, I can do it’—but you also have to be, like, ‘I’m somebody who you’re going to want to work with.’”

In show business, selling yourself is being yourself, according to Clyve.

When he was asked which of his incredible experiences stood out the most to him, he starts with the reaffirmation that working for the Pope, and on his popemobile, stands out above the rest. But he also notes that his experience with Obama is something he’ll always remember.

“Doing the president of the United States for his Frontier Conference was pretty damn—pretty darn cool.” 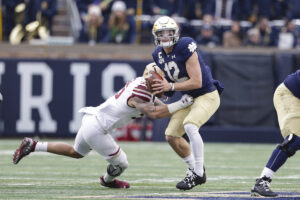 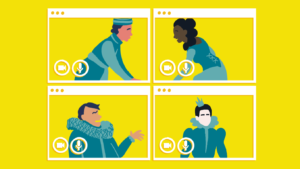