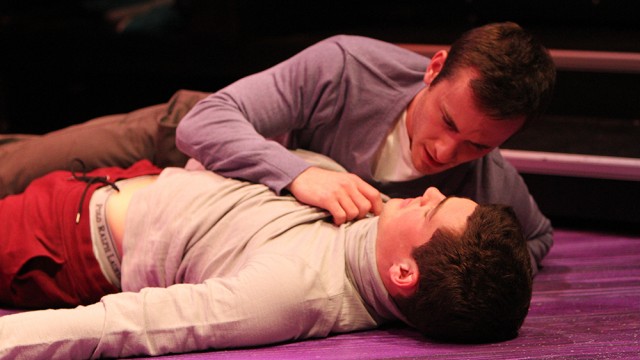 Family, love, and religion are sometimes incompatible terms. This tension becomes particularly apparent when a gay Christian man has both a homophobic father and an atheist boyfriend.

Next Fall, directed by Sarah Krantz, A&S ’15, deals with the aftermath of a terrible car crash that puts Luke (Jared Reinfeldt, A&S ’16) in the hospital with a coma. Luke’s friends and family come to his side in this trying time and must wait agonizingly to hear developments in Luke’s condition.

The production design by Keith Lebel, A&S ’15, and Danielle Wehner, A&S ’16, was crafted so it could easily adapt for these flashbacks. The middle of the stage is an eerily lit hospital waiting room. The flickering fluorescent lights are a small touch that help set the tone of the play. To the sides of this waiting room are Luke’s hospital room, a hospital gurney veiled by a white cloth, and a conservative, plain design of Adam and Luke’s apartment. This layout made for easy transitions and a dynamic relationship between the waiting room and the other settings. Holly would be pacing in misery in the waiting room while Adam and Luke were battling it out in their living room, serving as a poignant reminder of Luke’s eventual fate.

Luke and Adam’s dynamic is strange, to say the least. It wasn’t that Reinfeldt and Troum’s chemistry wasn’t believable—the characters were just strangely written. While Adam’s atheism and Luke’s Christianity greatly polarize their interactions, the way they bicker about their religious differences makes their relationship generally unbelievable. The two characters bring up compelling points on both sides of the argument, but, overall, Adam and Luke seem to be an unmatchable pair that do not belong together.

Adam’s progression is also a little bizarre as well. Troum, as Adam, handles Luke’s partial rejection of their lifestyle with compassion and confusion—an apt reaction to the conflict, but Adam’s vicious demeanor towards his boyfriend’s faith can seem unfounded and pestering. To hear adam, as an atheist, tackling Christianity’s concepts could feel awkward and off-putting, but Troum captures Adam’s certitude with force and works to bring out his character’s conviction.

Luke’s divorced parents are also intriguing on stage. Maisie Laud, A&S ’16, and Kearnan are a good fit for depicting the divorced couple, brought together by this tragedy. The audience is given a nice insight into the couple’s troubled past. Their interactions seem sincere, yet distant when they are brought back together by their son’s misfortune. Laud adds a bit of relief as tension builds on stage. And with Kearnan, she takes on a southern accent that adds a nice touch to the characters, holding it up well throughout the production.

Butch plays the most formidable role in the play. He is the physical manifestation of the tension between Luke’s sexuality and his religion. Luke fears his sexuality will disappoint his father and Kearnan exerts this sense of expectation over his son wonderfully. The audience can feel the palpable fear that Luke expresses at the thought of not living up to his father’s vision for him.

Brandon, a former friend of Luke’s who is listed as his emergency contact, is also sitting in the wait room. Joe Meade, A&S ’15, has a stature and delivery that fits his character well, but his character is left relatively undeveloped in the play—he is only really featured in one oddly paced scene.

Weidenman’s Holly is rather playful and bubbly in her flashback scenes and attempts to be uplifting and hopeful in the waiting room. She is one of the few characters, interestingly enough, with the ability to pass between the differing sets on stage. Weidenman can cross this boundary seamlessly and while her character doesn’t have much of an arch, her presence is inspiring to the rest of the characters.

Despite the strange approach the play takes to discuss homosexuality and religion, the rest of the play is captivating. There is more than enough investment in Luke’s character to keep the audience engrossed in his plight. The relationship between Luke and his father is filled with exciting and meaningful stress and Reinfeldt and Kearnan deliver this conflict wonderfully. The revelations and narrative structure of the production are alluring and well paced, rounding out the play’s story holistically.

Next Fall is a heart-wrenching production. These characters, immersed in such misery, inspire the audience’s emotions and intrigue exceptionally. The play poses a lot of moral questions, ambiguous and strange as their contexts may be, that are extremely relevant to today’s society. The set design, emblematic of the versatility of Bonn Studio theater, is absorbing and powerfully utilized as a reminder of how close tragedy is to one’s doorstep. Next Fall is a compelling family drama that reminds the viewer of the abrupt nature and taken-for-granted beauty of life.