Home » LTE: From Climate Justice On A Lunch With John Fish 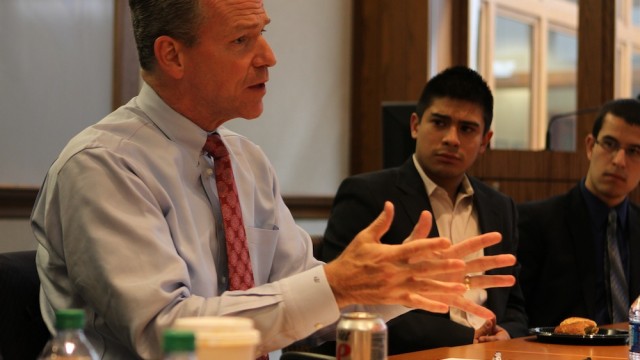 LTE: From Climate Justice On A Lunch With John Fish

The Chairman of the Boston College Board of Trustees, John F. Fish, was the keynote speaker for the Winston Center for Leadership and Ethics luncheon on Wednesday April 8. Mr. Fish sports an impressive list of accolades, from Chairman and CEO of Suffolk Construction Company to Chair of the Boston Olympic bid to Chair of the Greater Boston Chamber of Commerce, and much more.

Attendees filled the room with an eager buzz to hear the Chairman’s story. Passionately describing what has made him a success, Mr. Fish discussed setbacks he faced in his youth that taught him how to turn challenge into opportunity, such as overcoming dyslexia, subsequent poor SAT scores that hindered college admission, and a neck injury that put him on the sidelines in football. Such lessons allowed him to blaze new ground when, upon his college graduation, his father put him in charge of a new construction company in Boston that rejected organized labor. The lessons later guided his decision amidst the 2008 financial crisis to cut his losses and expand his company by acquiring four others (although he simultaneously laid-off a number of employees). Following subsequent business deals, his now healthy company enjoys $2.4 billion annual revenue.

The chairman concluded by calling attention to the perilous situation that his generation has left for future generations, explicitly calling attention to global warming. I had the opportunity to begin the Q&A portion, continuing the discussion of climate change.  After thanking the chairman for his talk and for broaching the topic of global warming I asked, in light of the Pope’s pending encyclical on climate change and given the chairman’s positions on BC’s Board of Trustees and numerous youth organizations, what moral obligation did he feel to advocate for the well-being of future generations by proactively addressing climate change?

He replied it was an important issue to address and discussed ideas for the construction of seawalls to protect Boston from future storm surges. I pressed that while seawalls will be a necessary adaptation, mitigation of climate change by ending the use of fossil fuels is crucial for the well-being of the global community, much of which lacks access to such advanced infrastructure. He agreed more was needed, but suggested there was no silver bullet to solve the problem. Pressing further, I suggested that divestment, in this case removing investments in fossil fuel companies from the BC endowment, was a tried-and-true tactic that helped end South African Apartheid and rein in tobacco advertising campaigns. He explained divestment was complicated and required a different venue for further discussion.

The next question that the chairman selected came from another student concerned about climate change, BC’s refusal to divest from fossil fuels, and the decision of the BC administration to penalize students who organized peaceful vigils on campus. The chairman expressed concern over the rights of students to organize, promising to discuss the issue with Fr. Leahy and follow up with the student.

The third student selected by the chairman to ask a question also had deep concerns about climate change, and the grave responsibility for wealthy and privileged institutions like BC to do what they can. The student suggested the challenge of global warming was an opportunity. Divestment would not only be effective at loosening the political stranglehold of fossil fuel companies, but would help Boston College move Catholic and Jesuit communities forward on this most serious challenge–a challenge like those the chairman had capitalized upon throughout his career. In response, the chairman graciously thanked the student for his contribution, but promised that he would not be following up on the topic of divestment.

2 COMMENTS ON THIS POST To “LTE: From Climate Justice On A Lunch With John Fish”