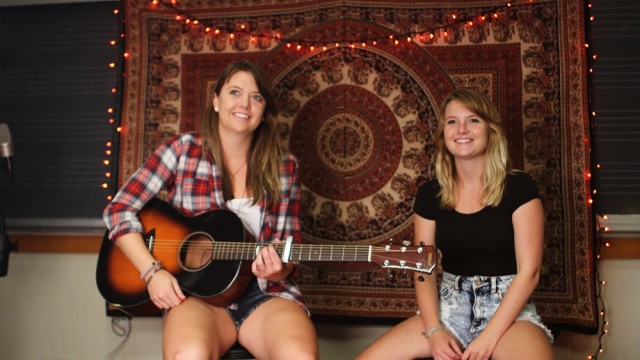 he two sisters sit across from one another. One has her guitar with her, the other just finished an intramural field hockey game, one of several sports both play throughout the year. Their eyes dart from side to side as if reading a list in the air. “Dad, always loved to blare Billy Joel throughout the house,” the older of two says. “He was always great to listen to.”

“Don’t forget Clapton—Clapton was big for us,” the younger reminds her sister. “Of course! I forgot. Dad loves Clapton.”

Talking with the Kelleher sisters is like looking at two sides of the same coin. They look different and say different things, but there’s also a natural, intrinsic element they share. Answering questions, each builds off the other’s previous statement, offering different perspectives back and forth that ultimately build into a complex and interesting outlook on their experiences growing up together and performing together. They often look to one another while trying to tackle a question, not because they’re uncomfortable with the atmosphere or what’s asked of them, but just because they seem to see a glimpse in each other’s eyes of what they’re trying to get at. It’s a fascinating process to watch unfold.

Meghan Kelleher, LSOE ’16, and Katie Kelleher, CSOM ’18, have been playing and actively listening to music practically all of their lives. Their father would ask them, starting at a very young age, to analyze the music that he and his wife would often play throughout the day on the stereo system in their home.

What did the lyrics mean? How’d they make the two sisters feel? What did the actual music make them feel?

“Now we approach music like that out of habit,” Meghan says. “Having such a wide range of music from him and him having us question these things was really helpful in our musical development.”

Katie giggles and adds, “We love dad-music—it’s what we were built on.”

Their parents pushed them to try piano and guitar lessons, which are now the two instruments that constitute a Kelleher Sisters performance.

Meghan and Katie aren’t the only musically-inclined members of their family either. They often mention their uncle—a high school principal in their hometown, Canton, Mass—who loves to perform in bar bands just for the thrill of it. On weekends they’d often go to see him and sometimes their aunt perform at local bars. Every once in awhile he’d call them up on stage to sing with him. The sisters’ younger siblings are, in their opinion, fantastic on the piano. When asked whether The Kelleher Sisters would ever evolve into The Kellehers (one of the younger siblings is a boy, named Timmy), Katie said, “We would love for them to! But they’re much younger, one’s in middle school and the other’s a sophomore in high school, but they’ve got kind of a stigma about it. They’re at a stage where they don’t really want to perform, but we think they’re extremely talented.”

Their creative process mirrors that way they conduct a conversation. Either Katie or Meghan will present the other with notes, lyrics, or a tune or riff that they made, and from there they usually collectively develop their starting point into something entirely different. Being back at Boston College this year has made this process much easier for Meghan and Katie. “It’s simpler to write here than at home,” Meghan said. “We’ll have chunks in the day where we can come together and actually work. We practically live in those soundproof rooms on the fourth floor of Lyons. Home’s great, but it’s much busier. We’d work 40-hour weeks each over the summer and there wasn’t much time to get anything done.”

There’s especially been a lot of inspiration for Meghan this year as far as writing goes, being a senior at BC.

“People are all going in different ways when this ends and that’s a strange realization once it really sets in,” she said. “I’m much more conscious of who I want to spend time with. Even though, throughout school, you’ve always known it was going to be this way, it’s a bit nerve-racking once you get here.”

While Meghan and Katie enjoy writing their own music, most of the songs they still perform are covers. They enjoy the process of reconstructing songs in different fashions. Both make the point that they love making emotional connections with their audiences through the songs that they cover, but that the best part about performing covers is seeing how they connect with the songs that they recreate and discovering why they changed the songs in the way they did. They’re much more concerned and appreciative of the music-making process rather than the exact final product and the way things turn out. Of course they want their work to sound great, but for them it’s more about how they get there.

Do the Kelleher sisters want their careers to evolve into superstardom? No, they enjoy playing their music in intimate and qualitatively, not quantitatively, robust settings. They’re far more inclined to follow in the footsteps of their uncle.

“I think our main goal is to be a bar band,” Katie says.

“Good bar bands are the best,” Meghan chimes in. “They can really change the mood. They pick songs to connect with an audience, not necessarily because it’s what makes them sound the best. It’s not about them. It’s about interacting with the audience.”

Some might think couples or siblings finishing each other’s sentences and thoughts is an annoying cliche, but with the Kelleher sisters, it culminates in intriguing creative process and a captivating approach to making music. 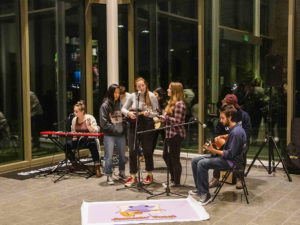