Home » Eagles Survive And Advance In NCAA Tourney Against Albany 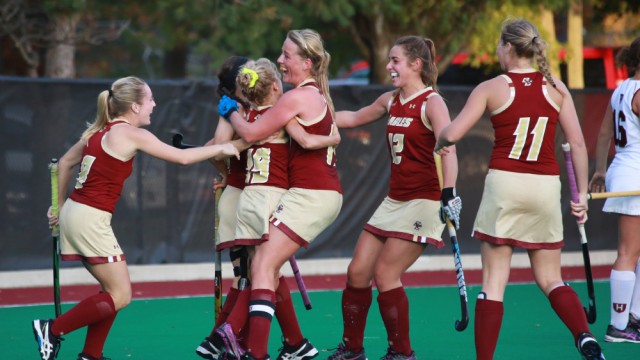 Eagles Survive And Advance In NCAA Tourney Against Albany

The show will go on for the Eagles. Last year, Albany made a Cinderella-esque run to the semi-finals, including an upset of No. 2 Maryland, while Boston College exited in the first round. But the story was different this time. No. 8 BC (12-8, 2-6 ACC) staved off a late comeback attempt by America East champion Albany (19-2, 10-1 AEC) to advance to the quarterfinals of the NCAA tournament for the first time since 1998.

A fast start saw the Eagles go up 2-0 early in the first half. A shot by Kelcie Hromisin deflected into the goal in the second minute. Four minutes later, on a penalty corner, Romee Stiekema sent the ball past Albany keeper Maxi Primus to double the lead.

But the offense never regained its rhythm after the second goal. Instead, the story of the match focused on the defense. BC coach Kelly Doton rotated her players almost eight times as much as Albany coach Phil Sykes, and the fresh legs on defense clearly made a difference. BC goalkeeper Leah Settipane was not forced into a save until over 20 minutes had passed in the first half.
Eryn McCoy almost added her 10th goal of the year when she launched a rocket off a Frederique Haverhals penalty corner, but the shot ricocheted off the post. The two teams entered halftime with only three shots apiece.

The second half started almost as fast as the first one, as BC conceded a penalty stroke to Albany just two minutes in. Paula Heuser could not convert for the Great Danes, as Settipane’s save kept the Eagles in front.

As Albany threw more and more players forward, the Eagles’ defense tightened and held their opponents to three shots in the rest of the half. The lone goal came for the Danes in the 54th minute when Heuser sent in her 34th goal of the year, second most in the country. As Albany pushed for the equalizer, Settipane made a great save off a penalty corner in the 65th minute, neutralizing the last real chance by the Great Danes. After Sykes pulled the goalie, it was just a matter of killing the clock for BC.

Tomorrow at 2 p.m. the Eagles will face the University of Connecticut, the reigning national champions who put three past Louisville today in a shutout win.