The School of Social Work Hosts Screening to Educate on Sexual Exploitation, Prostitution

Shanequia was just 12 years old when a 29-year-old man seduced her. He told her he loved her, she said, and they would go out to dinner and to the movies. After two weeks, he told her that he was a pimp, asking her to get involved to make some money for him. She did it for him because she cared about him, she said.

At one point, Shanequia tried to run away because she was tired of working and wanted to be a child again. He found her, however, and raped her. She began to think that her body was his property and blamed herself for being raped.

On Friday evening, the Boston College School of Social Work showed the film Very Young Girls, a documentary about sexual exploitation in New York City, including Shanequia’s story, and held a panel discussion with local experts who work to help young men and women who have been exploited.

The film documents the stories of the girls in Girls Education and Mentoring Services (GEMS), the only organization in the state of New York that serves girls and young women who have experienced commercial sexual exploitation and domestic trafficking.

The women were recruited into the industry between the ages of 12 and 16, as they explain in the film. The average age for entering is only 13.

“People just don’t get it. They want to think that if they’re over 18, it’s strictly by choice, that there are other options.”

Dominique, who dreamed of being an archaeologist when she was older, was 14 when she started. As a child, she experienced domestic abuse, so when an older man began to act like a father to her, she welcomed him. The man, who became her pimp, encouraged her to do drugs, too.

She gave all of the money she made to her pimp, who did not always feed her. Although she wanted to leave “the life,” she had no other options—she could not go back to school, but she was too young for the shelters, which were only open to women over 18.

Dominique, like all of the other girls in the film, found a shelter in GEMS.

Rachel Lloyd, who was sexually exploited as a teenager, founded the organization in 1998 after realizing that there were many young women who needed help, but were not eligible to receive aid from traditional social service agencies.

As the film shows, the women who come to GEMS for assistance are given a bed in a New York apartment, money for food, a chance to receive an education, and various other tools to help them restart their lives. The women are given a strict curfew and cannot bring any males within the vicinity of the apartment building. They still have many of their freedoms, Carolina, one of the women in the film, said.

The film captures the women celebrating birthdays and Christmas—they have a big Christmas dinner, sing songs, and exchange gifts.

If Lloyd does not see one of the women for a few days, she will call her to check in on her. Not all of the women choose to stay, and there is nothing she can do to force them to.

If law enforcement catches the underaged children who are sexually exploited, the police can charge them with prostitution. In the film, Carolina relapsed and left GEMS. She was then arrested for prostitution and served a 30-day sentence in jail.

In the panel discussion following the film, Donna Gavin, a member of Boston Police’s Human Trafficking Unit, explained that since 2005, no children have been tried for prostitution in Boston.

Many of the laws, she said, changed in 2012, as people began to realize this issue is happening everywhere, even in Boston. Some of the traffickers, Beth Bouchard, program manager of Support to End Sexual Exploitation at the Children’s Advocacy Center in Suffolk, said, can be found at public transportation stops throughout the city.

This is a high-risk, prevalent issue in Boston, Bouchard said. Often gender, race, and socioeconomic status play a role.

In total, about 50,000 women are trafficked in the U.S., Westy Egmont, a professor in the School of Social Work, said.

“It’s such a complicated web they’ve been a part of that unless you’ve been there and talked their language and relate to it, you are always an outsider,” Egmont said. “And I think in our humility we have to recognize our need to partner with women to be those agents.”

These people also need an alternative to a pimp, Egmont said. He pointed to faith as one substitute.
“So much of it happens behind closed doors,” Gavin said.

Last year, Bouchard said, there were 177 referrals for runaways, who are at a high risk of exploitation. Of this group, 75 percent had a history of running away.

Being a prostitute is not always a choice, as many people think it may be, she said.

“People just don’t get it,” she said. “They want to think that if they’re over 18, it’s strictly by choice, that there are other options.”

To combat exploitation and trafficking, Gavin believes, we must target the customer rather than the seller.

“If there were no buyers, this would not be a problem,” she said. 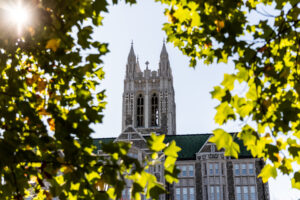