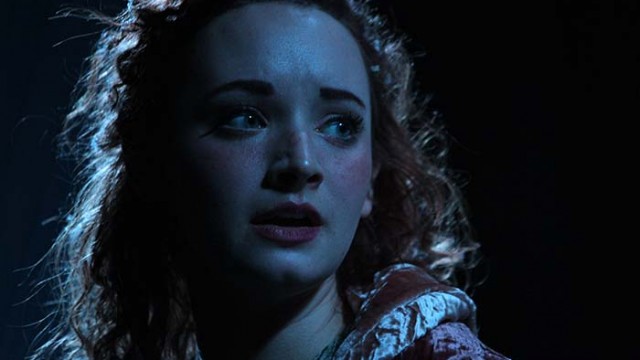 Years ago, somewhere in the vast expanse of New Hampshire, a 5-year-old Caroline Portu, MCAS ’16, prepares to face off against the French National Guard. She’s nervous. Portu has never faced off against a force quite like this. Her saving graces are her two brothers. They’re younger, but they’re made up of the same vivacity as their sister. She’s quietly singing to herself, “Here upon theses stones we will build our barricade / In the heart of the city we claim as our own.” The Guard is advancing on their location. Portu and her brothers take a deep breath and prepare to jump. After a few seconds of perfect stillness, the three leap over the pillows and charge headfirst into the oncoming soldiers.

This is practically how Portu responds to the question, “What are some of your favorite musicals?” One might expect to hear her rattle off a few Broadway hits and want to move onto the next question. Instead, Portu hits you with a beautiful picture of her early days learning some of the best musical numbers to hit the world’s stages. Years later, finishing up her senior year at Boston College, Portu has just signed off on the last musical of her BC theatre career, Learning How to Drown. In her time here, Portu has performed in a variety of musicals and plays, including Godspell, The Drowsy Chaperone, The Trojan Women, and Legally Blonde. While Portu notes that each of these musicals brought its own challenges, Learning How to Drown provided the best learning experience.

Learning How to Drown was written and produced by Patricia Noonan, BC ’07, and put into the BC theatre schedule as a workshop. The students involved were given a chance to experiment with characters since there were no previous performances. Portu was told to work on the character at many different angles. In this thinking, Portu was able to relate herself to her character, trying to see where her personality could aid the character. Also, with the novelty of the show came a chance for the students to interact with it on a more personal level instead of academically, as Portu puts it.

“It was great because it was less academic,” Portu said. “It was much more performance oriented, which put us in a more professional setting. What I’ve noticed at BC, which is great, but can be detrimental, is that we’re focused on the history and background of a piece, rather than how we feel about it or connect with it.”

Looking back on her other work in the theatre department, Portu noticed that she often enjoyed student-directed plays and the unique opportunities that they gave students. In a less rigid setting, Portu felt that the students could discuss where they fit into the pieces that they were working on, rather than the setting and reason that the play was written.

“I tend to like the student shows more,” Portu said. “It’s more fun. We’re in charge. We can talk about a vision of a show over mozzarella sticks, as opposed to being given these big inaccessible abstractions. The students won’t talk like that. They’ll ask you what you think. They’re really open to hearing your opinion because you’re on equal playing fields.”

Now that Portu has finished her last show at BC, she’s got her sights set on the future. With graduation nearing, Portu is in the midst of planning her career outside of BC. Currently, she’s working with two national wedding band companies. Over the summer, Portu will play at venues across the country, continually earning a name for herself in the music world. She’s also looking to record an EP in New York, but with school, it’s hard for her to plan trips to New York to go into a recording studio. Sketch comedy is also an interest of Portu’s, and though she might not set that at the top of her priorities, Portu is all about keeping her options open to the best of her ability.

“The key is, you’ve got to actually be there,” Portu said. “That’s what this summer is for. I’ll probably start in New York and see where things go from there. I definitely don’t have a plan, and I’m fine with that because that’s what my life has been like for the past four years.”

Reflecting on her time at BC, Portu had many words of wisdom for future BC students and, particularly, theatre majors. Portu also went to lengths noting how differently things worked out from how she thought her time at BC would be spent.

When Portu entered BC, she felt that theatre would be a much larger part of her educational experience here. She even thought about applying to a conservatory in the city under the assumption that she wanted to focus more on performing than on traditional education. Once at BC, Portu found a love for philosophy and adopted the subject in a double-major with theatre. Over the years, Portu started to realize that she could directly apply what she learned in her philosophy classes to much more than just academic papers.

Portu feels that an ability to observe the world from different perspectives has helped her grow as an actress. She notes that her philosophy major helped her realize this vital point and that, even though she enjoys applying this practice into her acting method, she feels that having a multifaceted worldview is the most helpful thing someone can do for his or herself in life.

“Generally, in college, your job should be to pick and choose the philosophies and worldviews that work for you, wrap them up in a ball,” Portu said. “You end up holding onto that ball for the rest of your life.”

Caroline Portu’s future might be shrouded in fog. The French National Guard might be looming ahead of her. Portu, on the other hand, has her ball of knowledge—a ball of knowledge and practice that can help her through all of life’s challenges and trials.