On Saturday evening, the Boston College Graduate Student Association welcomed Tina Tchen, assistant to the president of the United States and Chief of Staff to First Lady Michelle Obama. Tchen, who is also the executive director for the Council of Women and Girls and previously the Director of the White House Office of Public Engagement, spoke about several key progressive and social issues that are currently unfolding inside the White House under the Obama administration.

Tchen prefaced her talk on workplace flexibility, domestic abuse, and women’s equality with a brief personal history about how she went from growing up as a child of Chinese immigrants born in Ohio to working in Obama’s cabinet.

Upon graduating from Radcliffe College—the former all-women’s college in Cambridge—Tchen worked on the Equal Rights Amendment (ERA) of 1972 and soon after graduated from law school at Northwestern University. Tchen then went on to work as a litigation partner for several different law firms in Illinois, and also served on the Illinois Bureau of the Budget.

Along the way, her “extra-curricular” moments in Illinois—working on PACS to help get Democratic women elected in government—led Tchen to cross paths with Barack Obama.

“I met the president long enough ago that neither of us know how we met,” Tchen said.

Whether it was working on the ERA or pushing for women in government positions, Tchen emphasized that her advocacy and active experiences have galvanized her efforts to improve workplace conditions.

As Tchen explained, the U.S. is the only industrialized country without national paid leave—in other words, if somebody misses a day of work, he or she do not necessarily get compensated. According to her numbers, 44 million workers are without paid sick days.

Perhaps worse is that missing work because of illness could mean losing one’s job, Tchen said.

Embarking on policy for paid family leave is not only important to Tchen and her progressive cohorts, but also to Republicans. Tchen claimed that 70-80 percent of Republicans think this is a government issue.

Tchen asserted similar passion and a call to action over sexual assault, something she has worked on her entire life.

According to Tchen, one in five female students will be sexually abused during their four college years. Tchen championed the “It’s On Us” campaign in her speech, an awareness movement that hopes to prevent sexual assault on college campuses nationwide.

“It’s on us to create a culture where sexual assault is not accepted,” Tchen said. “And you are leading it.”

BC, as well as the entire Atlantic Coast Conference, has pledged support for the “It’s On Us” campaign. For Tchen, this is the sort of progressive action that is great to see.

“It all brings me so much optimism,” Tchen said, addressing the crowd of both undergraduate and graduate students. “You are going to lead us to change.”

Social change is something that Tchen has been working relentlessly toward through her Let Girls Learn initiative. She  and Michelle Obama have championed this worldwide effort in order to show that girls are equally as valuable as boys. As they witnessed during their travels to Japan and Cambodia, other countries and other cultures do not always provide equal opportunities to women.

“Educating a girl is like watering your neighbor’s lawn,” said Chen, repeating an African saying.

62 million girls worldwide are not in school, cited Tchen. If Let Girls Learn initiative is successful, highlighted Tchen said, then GDP will go up 3 percent and national security will improve.

Although the Obama administration will come to an end this year, Tchen recognized that we must still care about these issues in order to see real change.

Tchen concluded her speech by laying out plans for a United States of Women summit in order to celebrate the progress women have made and what the future looks like.

Overall, Tchen preached to those in attendance to stay involved. 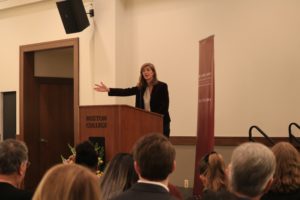