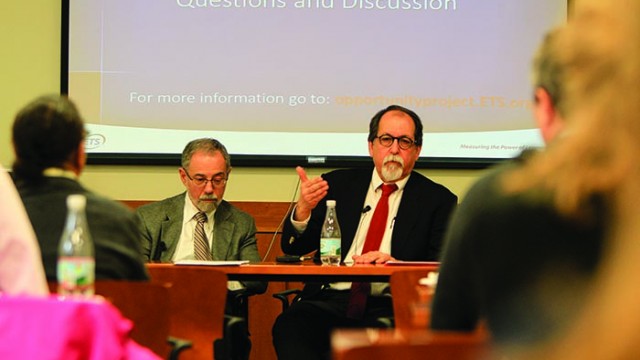 Braun, Kirsch on ‘Choosing Our Futures’

In 2013, data showed that men and women with four-year college degrees made 98 percent more in wages than those who did not attend college. With the education and wage differential increasing, Educational Testing Services (ETS), a private nonprofit educational testing and assessment organization, published a report titled “Choosing Our Future: A Story of Opportunity in America” to incite a change in the American education system.

Henry Braun, the director of the Center for the Study of Testing, Evaluation, and Educational Policy at Boston College, and Irwin Kirsch, who has worked at ETS for over 30 years, presented the report at BC on Mar. 2. The event, which was sponsored by the Lynch School of Education, reflected on the fact that children’s opportunity later in life largely depends on their schooling, beginning in grammar school.

Braun came to BC in 2007 but previously worked as a principal and within ETS. Kirsch has worked at ETS for 30 years and now works as the director of the Center for Global Assessment. The “Choosing Our Future: A Story of Opportunity in America” report is an outgrowth of Kirsch and Braun’s policy work, which grew out of their concern over the direction of America. They decided they wanted to do something constructive with their research and published the report.

At the event, Kirsch described the forces at play in America today. He said that the increase in technology, the effects of globalization, and the use of business practices and governmental policies are shaping this generation.

—Henry Braun, the director of the Center for the Study of Testing, Evaluation and Educational Policy at Boston College

With changing global conditions, there has been a rise in the importance of human capital, extending beyond reading, math, and writing. Employees are now expected to analyze, use technology, and attain problem-solving skills. Employers, however, are not providing the means to teach their staffs, and employees are expected to learn on their own.

Meanwhile, people are becoming less literate and less qualified, as employers are requiring more from their employees, Kirsch said. Millennials are currently underperforming the adult population in schools, and there are 15 countries that are scoring higher than the U.S. in literacy.

Kirsch and Braun discussed how students in schools are not receiving equal learning experiences, based on their race, income, and district. When these students do not receive a quality education from a young age, they are unable to enter into this demanding job market.

Kirsch and Braun showed graphs that depicted the increasing wage gap between the upper and lower classes due to the lack of opportunities for children from low-income families. Braun explained how children usually inherit their parents’ living conditions.

Braun described the pathways to success as being correlated with neighborhood characteristics, school quality, health care and nutritious foods, and networking opportunities.

Kirsch discussed how the technology-driven, globalized economy has had devastating consequences for both the low and middle classes. If left unchecked, these forces will continue to affect future generations, he said.

Braun and Kirsch said that the only solution to this problem facing children from low-income families would be if citizens and the American government began to invest in human capital. They shared the story of a town in Kalamazoo County, Mich., where the school district paid for every high school graduate to attend a four-year university. Efforts like those of the Kalamazoo school district are the only solution to the gap in success between classes.

“The cumulative effects of the profound economic and social changes over the past few decades have shaken American optimism and faith in the American Dream,” the report said.