Home » Seeing the Other: BC’s Road to Change 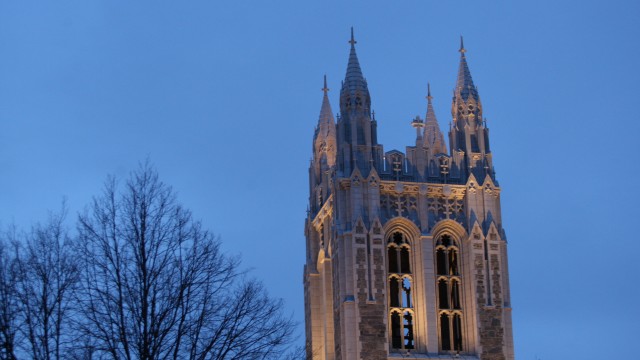 Seeing the Other: BC’s Road to Change

When the Boston College Observer went under, it was a quiet burial. Asked for comments, its editors simply asked that the event get no coverage. Though the record might not show it, the conservative newspaper’s gentle destruction in 2013 marked a symbolic turning point  in the University’s history. No longer would there be a voice from the sidelines, scouring residence halls for Support Love bulletin boards, writing an annual editorial attacking the BC production of The Vagina Monologues. Instead, the Observer would be reincarnated as the Torch—a reflective, Catholic newspaper, probing inward rather than outward and aligning much more closely with BC’s dominant social justice service culture than the Observer, which essentially aimed to bring the gripes of social conservatism to BC.

Are we all the better for it? A few months back, The Harvard Crimson published a feature titled “The Elephant in the Room: Conservatives at Harvard,” which took a nearly anthropologic perspective on conservative college students. The whole thing read as if the Crimson was documenting the behavioral patterns of the last white rhino, knowing full well their children would experience no such creature. The same story could have been written at practically any Northeast university, including BC. And while it would be naive to declare conservatism itself dead, the public voice of conservatism has effectively been squelched on college campuses.

When Black Lives Matter activists take to O’Neill Plaza, as they did last fall, you can expect no next-day editorial criticizing the act—instead, the only evidence of opposition gets collected on anonymous social platform Yik Yak in the form of racial slurs. These remarks are promptly screen-captured, posted to Facebook, and used as evidence that student activists must continue the charge.

It’s nearly impossible to muster any sympathy for this type of anonymous wall of bigotry, and for just that reason, I see the BC administration (once quietly cheering on conservative voices from the sidelines) begrudgingly falling in line with the vocal left. The authoritarian, moralistic voice of the Observer has been substituted for Internet troll conservatism—a trend noticeably working its way into national media narratives, as well. Those with the Observer wrote from their principles, however much you might disagree with them. This new wave of unspoken conservatism comes from a place of fear, a feeling that—as the Harvard article described—conservatives are a dying breed and might soon have no voice whatsoever on college campuses.

This transition was particularly noticeable at BC, an institution expressly designed to maintain some form of orthodoxy in its students. The University’s lack of a student union and near-draconian policies around free speech have created an environment in which any meaningful encounter you have with someone of an opposing viewpoint occurs either in a supervised classroom space or University-approved gathering. This system, which long upheld the will of the silent majority, has been turned on its head as students grow increasingly liberal. What’s left is a clumsy infrastructure, where the only choice for conservative administrators is to counterpunch leftist groups with disciplinary codes and the red tape of bureaucracy. They know, as well as the rest of us, that there will be no return to cultural conservatism at BC, and the unpleasant holdout strikes me as mostly intended as a last-ditch appeal to the donor class.

The desire of those on the left for “safe spaces” on college campuses is now a favorite talking point for conservative pundits, but safe spaces have always existed for conservatives, by way of churches, religious organizations, and elite clubs. And as a country, we’ve long recognized such spaces as valuable, for building communities and preserving the values of specific cultural groups. Only recently has the idea of spaces for like-minded people created such a sense of disgust. Instead of focusing on safe spaces, let’s recognize what’s really hurting discourse on college campuses: the absence of spaces in the middle.

For BC, it starts with some basic infrastructure improvements: we need a student union, and we should reconsider the tribal, small-group living situation created by University housing. Beyond that, the University should adopt free-speech policies that build vibrant social spaces across campus. Until undergraduates in Students for Sexual Health and the Pro-Life Club can hang banners next to each other on O’Neill Plaza, host a joint panel event, and retire to dorm spaces where they routinely interact, we can’t say that BC has unlocked the true potential of its diversity.

My sophomore year, I saw a mob of angry readers from the right lodge brutal personal attacks at then-Heights columnist Evan Goldstein for his critical remarks on Coach Addazio’s #BEADUDE campaign. Two years later, I saw a conservative freshman, Karl Salzmann, suffer a similar string of insults from the left, after writing into The Heights to criticize its coverage of activist group Eradicate Boston College Racism. These two incidents marked a radical shift in BC’s dominant political ideology, fully disguising how remarkably little we’ve progressed in how we engage with the other side. This pattern of surface-level change covering up bigger, cyclical problems is the unsettling reality of BC’s forward march.

Having finished as editor-in-chief of The Heights in the fall, I’ve taken this last semester as a time to put the past four years in perspective—an outsider-turned-insider-turned-outsider observing a culture I spent my college career covering. It’s impossible to reduce to a single narrative, but if you want perspective on BC, check back in The Heights’ archives. The stories you’re reading today were written five years ago and 20 years ago, and will be written again five years and 20 years from now. BC is a place for factions, slow-moving policies, optimistic reformers, the promise of expansion, and an immutable desire to be more.