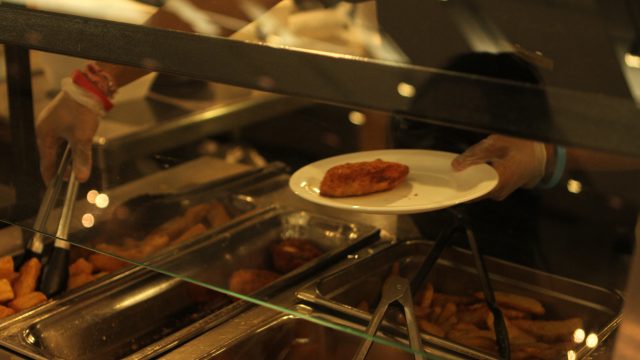 Over 2,000 plates are missing from Corcoran Commons, according to Boston College Dining Services. BC Dining student interns met with dining staff last week to discuss the issue and brainstorm some potential solutions.

The trend of stolen plates comes after BC Dining implemented a sustainability initiative that got rid of disposable to-go containers.

Since the beginning of the semester, all food has been placed on reusable plates. Students who want to take food back to their rooms must ask a cashier to provide them with a disposable container and then transfer the food to the container themselves. Students may not have been fully aware of this change and how to handle it, Director of BC Dining Elizabeth Emery said.

“Now that we have gone through all of these reusable dishes, we have had to revert to a lot more paper plates, which defeated the whole purpose,” Emery said.

Emery recognizes that Corcoran Commons is busy at peak dinner hours, and students are sometimes unsure if they are going to get a table. As a result, students often request disposable containers in case they have to take their food outside of the dining hall.

“We made the change with the best interest at heart,” Emery said. “The purpose was to reduce the number of disposable containers and make a more positive impact on the environment. Change is hard. It seems to me we could’ve done a better job communicating the ‘why.’”

BC Dining is also working to improve waste disposal in McElroy Commons. In Corcoran Commons, students place their waste on a conveyor belt and dining staff sort the used materials into trash, recyclables, and compost. At McElroy, students are expected to sort their own waste. Emery understands that it is difficult for students to sort their waste correctly if they are in a rush to get to class or simply do not know which waste item goes in which bin.

The dining interns met with the dining management team last week to organize a trial run of composting in McElroy at the end of the semester. This effort will be a collaboration among BC Dining, the Office of Sustainability, and the Environmental Caucus, a division of the Undergraduate Government of Boston College (UGBC). The dining interns will once again set up tables to inform students. The focus of this initiative is student engagement and education, Emery said.

“We love the feedback students give to us face-to-face in the dining halls, but we welcome any feedback that we can receive because we are constantly looking to try to get better.”

—Elizabeth Emery, Director of BC Dining

Emery is also open to a long-term proposal and actively seeks feedback on how BC Dining can improve.

“Student feedback is key to our success,” Emery said.

With 21,000 meals served every day, BC Dining finds it crucial to respond to student needs.

In the spring, Emery emailed the leaders of various students groups who had asked to meet with her and express their concerns. Some of these groups included UGBC, EcoPledge, resident assistants, students with allergies, and student-athletes.

This semester, Emery created a student dining advisory board in order to improve communication between students and dining services. The board meets twice a semester and is made up of two students from each student group that wishes to participate.

Twenty students representing different groups on campus attended the first meeting. Emery was impressed and excited by the turnout and decided to break students into smaller groups. Each group was assigned a senior leader from BC Dining who listened to suggestions and took notes.

Some of the suggestions Emery heard were immediately addressed. For example, some students were upset that they did not have the option to add an animal protein to the new harmony bowls in Eagle’s Nest. Within the next week, students were able to top their harmony bowls with chicken.

BC Dining also receives student feedback via its website. Emery receives three to four email requests a day and quickly addresses these concerns.

As students exited the dining hall on the night of the first Menus of Change culinary showcase, they were able to take a five-question survey. Emery will use this data to further improve dining options. She noticed a few trends in the survey data. A majority of students wanted to see food similar to what was served at the culinary showcase added to the regular dining menu. Many students also prioritize healthy eating and would like to see more healthy options on a regular basis.

One nutrition effort implemented through Menus of Change is the “protein flip.” A protein flip consists of supplementing some animal protein with another source of protein, like a grain or a legume. A protein flip makes a grain or vegetable the center of a dish rather than a meat. For example, BC Dining has offered a grain-stuffed avocado topped with chicken or shrimp. This dish provides less meat than the average protein-filled dish, but still provides students with protein in another form. Another example of a protein flip is the fusion burger, consisting of half meat and half grain, which was presented on the night of the culinary showcase. Food options with the protein flip are being built into the regular menu, and students will be able to see them on a consistent basis, Emery said.

“We have been working on this for a while,” Emery said. “Most of the test kitchen options that we rolled out last year had the Menu of Change principles. We just have to figure out the best way to communicate these changes. That is a work in progress.”

Based on the feedback Emery has seen, students also want to see more dining pop-up events. BC Dining hosted two pop-up events last year, which were very successful, according to Emery. In the fall, BC Dining held an all-you-can-eat for one price dinner at Hillside. In the spring, BC Dining hosted a brunch in the Walsh Function Room with a performance by the BC jazz band. Emery received very positive feedback on these events and plans to hold more this year.

“We love the feedback students give to us face-to-face in the dining halls, but we welcome any feedback that we can receive because we are constantly looking to try to get better,” Emery said.