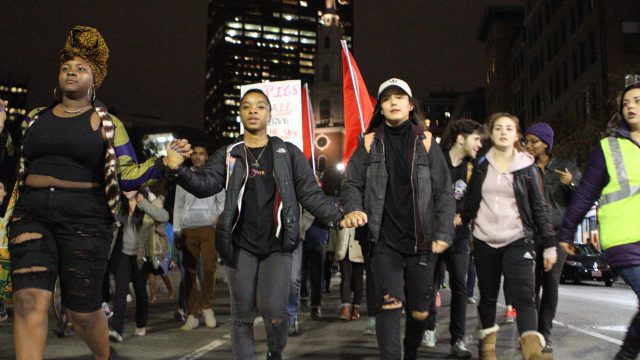 In the wake of a controversial presidential election, most universities across the nation will offer support to those in distress over its results, Boston College included. In addition to the resources various offices and organizations will offer, in general, there will be offerings from school officials and students alike for a chance at coming together. Like during past periods of strife, solidarity will be held up as the shining beacon of hope through which all good things emanate. As President Barack Obama, Stephen Colbert and others have already urged, good faith in our fellow human beings conquers all. Except when it doesn’t, like this week.

The American conscience dictates that hatred is negative and tolerance is positive. We strive to temper hostility, even at the price of silencing anguish. Through all our coaching many have forgotten revulsion completely. It is never a problem to find it hard to hate, until you find yourself unable to hate racism. Tolerance was once a pure disposition, until far too many people seemed to tolerate overt sexism in our politics. Institutions like BC would have you believe that all opinions are equally valid for the sake of appearing bipartisan. But what very few institutions, if any, ever have the courage to do, is to recognize the moral questions of partisanship and to take a position, even at the risk of offending those who might believe that Muslims are predisposed to sympathy of terrorists. For here all are one in legitimacy, and the cloak of togetherness has room for xenophobes.

Therein lies the root of what has become a national problem. Peace and quiet has anesthetized a generation to the ever-present fears, pain, and strife of peers who have always lived in an America that appears openly hostile to their rights and their safety. That’s the unique feature of this election: a man wielding the power of the executive branch who says, in no uncertain terms, that he’s coming after me; backing him, a massive constituency comprised of Islamophobes, anti-Semites, white nationalists, and those willing to stand beside them to advance themselves.

Now more than ever it is time to decide who we are and who our neighbors are. We can no longer afford to ignore sinister sentiments if they are mildly put. There is nothing on Earth that is worth sharing as humans if not a seething disdain for ideas that routinely produce violence and squalor for groups of people. We have run from contempt for so long that it has become the norm to go easy on the forces of evil. Only court judges that don’t hate sexual assault award three-month sentences, as in the case of Brock Turner. Only voters that don’t hate xenophobia can accept a religiously-based immigration ban, as their grandparents once accepted Japanese internment. Only university administrators that don’t hate institutional racism could so easily accept that its dismantlement relies solely on righteousness and good intent. People of color, the LGBTQ+ community, women, Muslims, and the like have for too long accepted a poisonous species of unity with their demographic counterparts and with each other. That contrived song of civility that we dance to does nothing to challenge Western culture’s biggest moral downfall, but instead allows bigotry to incubate and continue embodying who we collectively are. I encourage everyone, in the wake of a potentially volatile period of history, to demand of all their relations a joint conspiracy against the shameful tradition of butchering the livelihoods, bodies, and dignity of marginalized groups. What we need isn’t a binge of togetherness. We need a purge—to send the deplorable in exile.

2016 presidential election
‘Not My President:’ Thousands Protest Trump’s Victory at the Boston Common
‘Constellations’ Delves into the Recesses of Space and Time