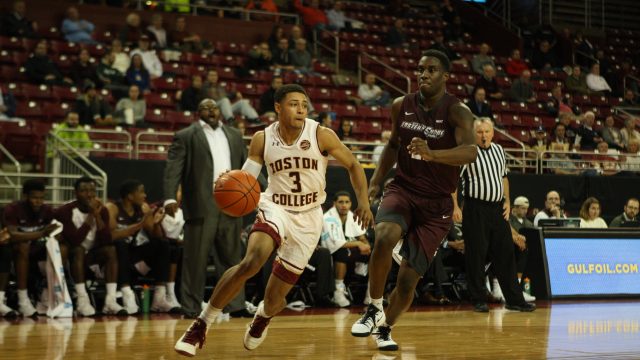 Freshman Ty Graves, celebrated by some as the point guard of the future for Boston College men’s basketball, is transferring away from the program midseason.

Freshman guard Ty Graves has asked for and been granted his release from the program.

The Greensboro, N.C. native was one of head coach Jim Christian’s top recruits entering the 2016-17 season. Graves appeared in the starting lineup at the beginning of the year, registering a season-high 31 minutes in the home-opener against Nicholls State. But as the Eagles moved through their nonconference schedule, the 6-foot guard saw his playing time shrink in favor of fellow freshman guard Ky Bowman.

In the first seven games of his collegiate career, Graves turned heads with his 3-point shooting, going 10-for-21 from beyond the arc. But a subsequent shooting slump, coupled with strong play from Bowman, resulted in Graves’ demotion to a bench role.

Graves received eight minutes of action in BC’s win against Auburn and seven in the following game versus Sacred Heart. He was absent from the sideline in the Eagles’ most recent contest, a 89-83 loss to Fairfield in which Bowman dropped a season-high 33 points. Graves will finish his BC career with averages of 4.8 points, 1.6 assists, and 1.6 turnovers in 18.8 minutes per game.

Per NCAA transfer rules, Graves will have to sit out next season. He has not yet announced where he will transfer.