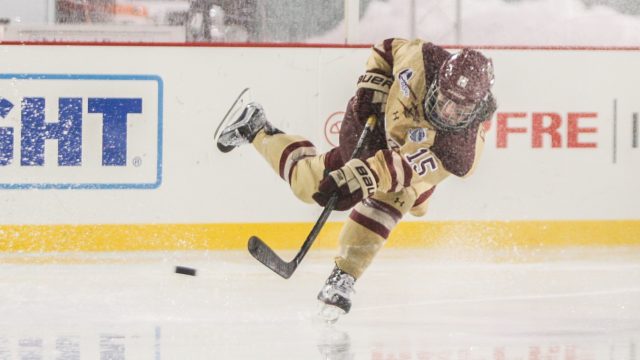 BOSTON — As Erin Connolly wound up her stick, she pulled a wave of water behind her.

Rain had landed gently during the first two periods of Boston College women’s hockey’s game against Harvard at historic Fenway Park. But in the third period, the skies opened up wide to the point where massive puddles formed around the ice. Passes fell well short of their intended destination. Players slipped while making cuts. Goaltenders Katie Burt and Brianna Laing even resorted to shoveling water away from the crease with their sticks.

But the South Boston native wouldn’t be denied at her home ballpark. With two goals—one of which came in that rain-soaked third period—Connolly lifted the Eagles to a 3-1 win in their first-ever Frozen Fenway game.

The Crimson, a largely-decimated club after a mass graduation of players over the last two years, ran with three lines for the entire game. Despite possessing one of the sport’s best coaches in Katey Stone, Harvard (1-11-2, 1-6-2 Eastern Collegiate Athletic) has muddled along throughout a trying rebuilding year. Yet they received inspiration at the beginning from an honorary member of the team: Denna Laing. A former star forward for Princeton and the Boston Pride, Laing has become an inspirational figure in women’s hockey since suffering a spinal cord injury last year during an outdoor game at at Gillette Stadium. And in the rain, Laing dropped the ceremonial first puck to a thunderous ovation.

Laing’s two sisters—center Lexie and goaltender Brianna—start for the Crimson, and got off to a good start against the Eagles (14-3-4, 10-2-2 Hockey East). Brianna kept the Eagles’ powerful offense at bay in the first period, trading save-after-save with BC’s Burt. Lexie, meanwhile, single-handedly killed off a BC power play by deftly forcing Grace Bizal and Megan Keller to swing the puck back-and-forth behind their own net. Her luck ran out, however, when she pissed a wide-open net on a 6-on-5 advantage prior to a Harvard power play.

In the second period, Bridget McCarthy put the first marks down on the scoresheet with a rocket of a shot from between the circles past Brianna Laing’s left shoulder. The play wouldn’t have been possible, however, without the help of Andie Anastos. The senior captain helped McCarthy in transition perfectly, sending a backward dish in stride to the streaking freshman. After the game, head coach Katie Crowley said that, since Anastos’s return from injury, she has been one of the most underrated players in the sport.

“Our team wouldn’t be the same without her on it right now,” Crowley said.

A few minutes after in the second, the Eagles drew another power play from a Lexie Laing hook. Once again, Anastos was the playmaker. She pushed a centering feed for Connolly’s first goal to give BC a 2-0 lead.

Then came the rains.

Following the intermission, the referees had to test the ice to make sure everything was safe. Despite some puddles, they gave the go-ahead … only for more torrential downpour to come.

But Connolly wouldn’t be dissuaded. A quick change found her back in play after a timeout. She received the puck at the center line. Given the changed conditions on the ice, she realized two choices: she could dump it off behind net, or give it a blast. Realizing that her passes weren’t going to go very far on the slowed-down surface, Connolly wound and fired. Her momentum brought her to one leg as she let it fly. But it was powerful and quick enough that she could admire it hit the twine before she fell down.

Rather than hurt the game, Connolly explained that the ultra-wet conditions in the third period actually made for entertaining experience. The conditions were only made better by the fact that the Southie native had a ton of her friends and family in attendance to watch her play. And the combination of outdoor play in the wet in America’s most beloved ballpark made for a special night for one of Boston’s own.