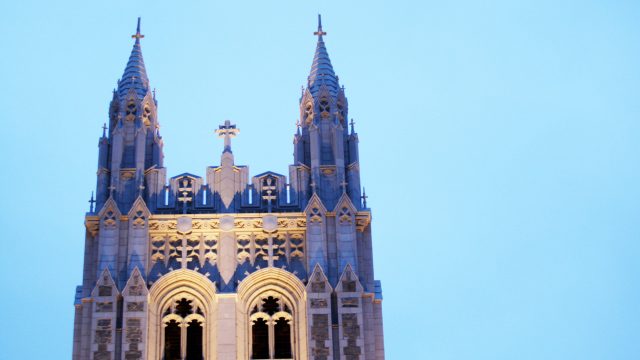 Forty-six percent of this year’s new faculty hires are women and 46 percent of new full-time and tenure-track faculty are AHANA, Provost and Dean of Faculties David Quigley said Aug. 30 at University Convocation. The AHANA figure is significantly higher than that of previous years, which often did not reach higher than 33 percent, according to past reporting by The Heights.

Last year, Soo said, BC held workshops to eliminate bias in the hiring process. People tend to hire new faculty who look and think like them, he said, rather than those who will reflect the diversity that exists on campus.

In 2015, the executive council of the Undergraduate Government of BC called for the University to put together a plan to hire more AHANA faculty. Quigley and Vice President for Student Affairs Barb Jones responded in a Heights letter to the editor.

“We are committed in our hiring and admission processes to support diversity and inclusion,” they wrote.

“Search committees review information on implicit biases in faculty recruitment and hiring practices, and discuss how faculty hiring culture can appear diversity neutral but are in fact limiting,” Martínez said.

Martínez also said that Lynch is making a serious effort to achieve higher levels of diversity in the search for new faculty. She said the efforts begin with educating search committees on the highest-quality hiring practices and continue on retaining and promoting faculty of color.

“At Lynch, we are a community of scholars who understand the importance of diversity to our mission and the advancement of knowledge,” Martínez said.

The department of theology also participated in the search for diverse faculty hirees last year, having looked for a joint appointment in the theology department and the African and African Diaspora Studies program.

Richard R. Gaillardetz, chair of the theology department, said that he and the department are committed to furthering its gender, race, and ethnic diversification. The department hired Amey Victoria Adkins, an AHANA hiree.

“Obviously we participated in this search with an awareness that we need both more women and more scholars of color to enrich and diversify our intellectual engagements,” Gaillardetz said.

Word of mouth is ultimately the greatest motivator for one to join BC’s faculty, according to Soo. If a prospective hiree hears that a faculty member had a great experience at BC, they are more likely to apply to join the community.

Soo wants BC to have a reputation of making AHANA faculty feel valued and appreciated. He has been encouraging more discussions among the administration and faculty to reflect the school’s commitment to diversity.

New AHANA faculty members this year feel that the school has been accepting and open-minded. One of them is Andrés Castro Samayoa, a Lynch professor. Samayoa, who researches diversity and equity in higher education, said he’s happy to be joining a community that shares a common commitment to fostering diversity.

“I believe that intentionally reflecting on the importance of creating intentional communities with diverse identities is deeply connected with the values of an education aiming to prepare engaged citizens,” Samayoa said.