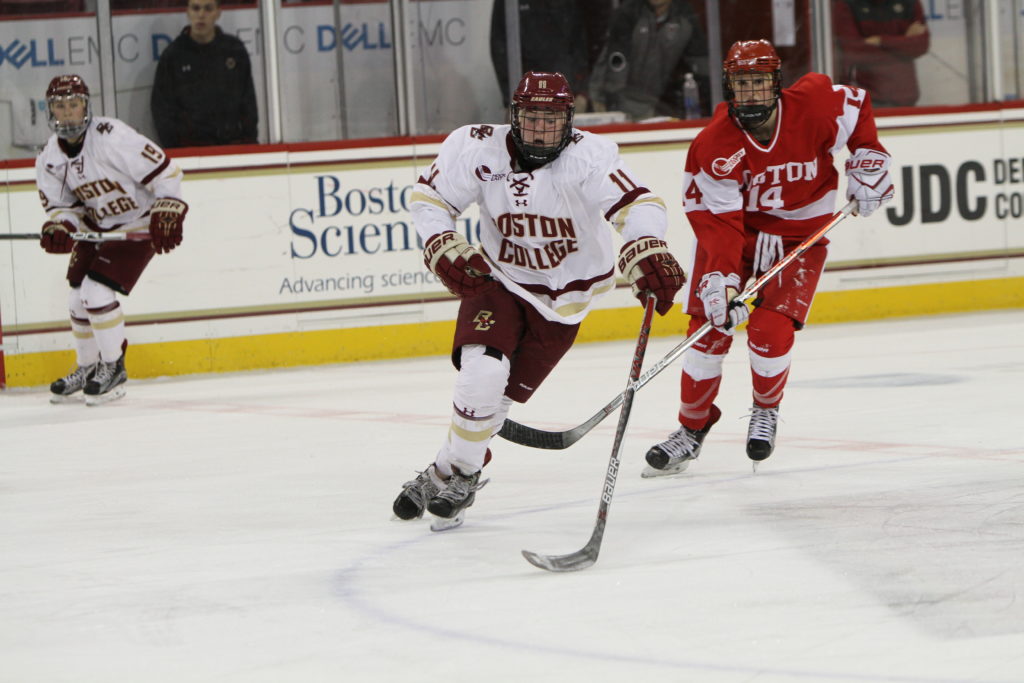 The Battle of Comm. Ave. never fails to fall short of captivating competition. This weekend, four of the nation’s leading scorers will go head-to-head in the 50th and 51st meetings between Boston College women’s hockey and crosstown rival, Boston University. The No. 2 Eagles (12-1-2, 6-0-2 Hockey East) boast the the top two scorers in the country, freshman Daryl Watts and sophomore Caitrin Lonergan. On the other hand, BU’s (6-7-2, 3-5-2) juniors Victoria Bach and Rebecca Leslie rank third and fourth nationally in scoring, respectively. In all likelihood, this weekend will come down to the individual performances of those four select players.

Friday’s game will be streamed live on ESPN3 (available on WatchESPN or the ESPN app). And Saturday’s matchup can be viewed on Stadium TV, a streaming service accessible through BU Athletics’ website.

2) Junior Makenna Newkirk will try to extend her 15-game point streak that began all the way back in the season opener against Minnesota Duluth. If she continues the streak, she will tie Haley Skarupa’s record in 2016 for the fourth-longest point streak in program history.

3) Goaltender Katie Burt is one of two in NCAA history to earn more than 100 wins in their career. While she currently has 103 wins, she is only 11 wins away from the all-time record.

1) Among all Division I hockey teams, the Terriers are tied for eighth place in scoring average per game, netting roughly 3.33 goals per game.

2) Although senior Erin O’Neill started the year as the Terriers’ goaltender, freshman Corinne Schroeder has taken over, allowing no more than two goals in eight of her last 10 appearances in the crease.

3) Aside from Bach and Leslie, BU has two other individuals who have surpassed the 10-point mark this season: Abby Cook (12) and Jesse Compher (11).

In October, the Eagles defeated the Terriers on the road, 4-3. Burt recorded a career-high 43 saves during the game, in addition to setting the record in Hockey East for career wins, earning her 53rd.

Burt continues to perform well in goal, making both tough and timely saves. Offensively, the combination of Watts and Lonergan could very well serve as the Eagles’ driving force. But, if the two underclassmen are shut down up top, Newkirk, Toni Ann Miano, and others will have to rise to the occasion.

Schroeder maintains her mojo in goal, as she has in her last 10 appearances. The Eagles have scored a combined 15 goals over the past two games, and have put each matchup out of reach in the first two periods of play. While it’s easier said than done, all Schroeder has to do is keep BU in the game going into the third frame. On the other end of the ice, Bach and Leslie will have to either outwork or keep up with Watts and Lonergan’s one-two scoring punch if the Terriers are going to have a shot.