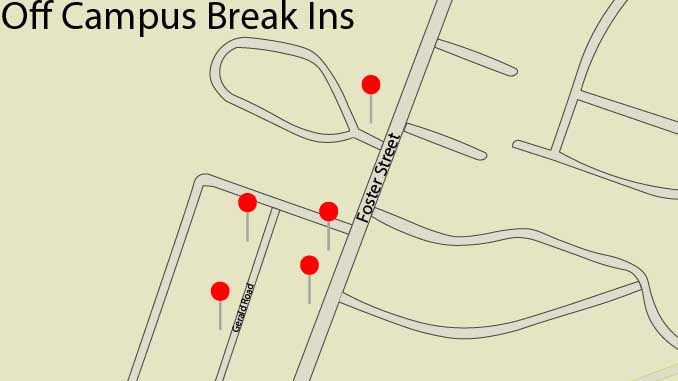 Five Break-Ins Off Campus This Month

The Boston Police Department (BPD) told The Heights that there have been five residential break-ins in the Foster St. and Gerald Rd. area of Brighton since the start of 2018. Boston College students who live off campus were notified of these incidents through a BC Police Department (BCPD) Community Awareness Bulletin last Tuesday.

The report stated that valuables such as electronic devices, jewelry, and cash had been stolen. According to William Stone, a resident of Foster St. and MCAS ’19, one group of BC students living on Foster St. had various valuables stolen and all of their exterior doors broken down.

“As the BCPD release states, in most cases (all except one, in fact) there was no forced entry,” Rachel McGuire, of the BPD office of media relations, said in an email. “The BPD advises students to securely lock all windows and doors at all times and to follow the tips provided on the BCPD release.”

BCPD, BPD, the BC Office of Residential Life, and the BC Office of Community Relations are planning to hold an information session for students to address questions and discuss crime prevention measures sometime next week, according to Chief of BCPD John King.

According to the Office of Residential Life, over 1,600 BC students live off campus. A majority of them are members of the junior class. Burglaries have often happened when students are not in their residences.

“Many of these incidents occur during holiday break periods when students are away from their local residences,” King said.

BCPD advised students to take a variety of precautions to prevent burglaries from occurring:

King said that BPD has primary jurisdiction for the local neighborhoods surrounding BC and that BCPD is always available to assist as necessary.

“The Boston Police and the Boston College Police Department have a very good working relationship and reports of off campus burglaries near the university are routinely shared with BCPD,” King said.

The Heights reported last October that two break-ins had occurred on Foster St. In one of the incidents, a BC student’s laptop was stolen and items were scattered across the apartment. In the other, an intruder was standing outside the bedroom door of a student, seemingly taking photos of her.

Students have expressed concern over the repeated nature of these burglaries on Foster St.

“It makes me nervous,” Stone said. “Even though there is almost always someone at my house, it [wouldn’t] take very long for someone to get in and rob us.”