Home » Notebook: Eagles Own the Glass, but Can’t Get Shots to Fall in Raleigh 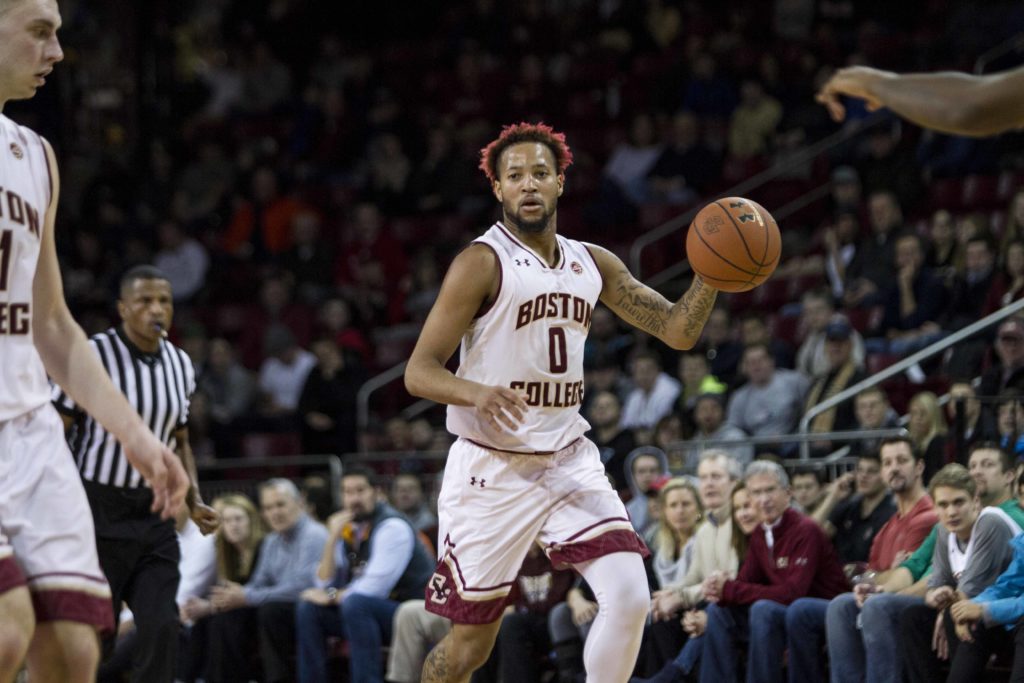 Notebook: Eagles Own the Glass, but Can’t Get Shots to Fall in Raleigh

Six minutes into Tuesday night’s game against North Carolina State, everything was looking good for Boston College men’s basketball. The Eagles led 6-0, having held N.C. State scoreless and forced six turnovers, while getting six quick points from Jordan Chatman and Ky Bowman. From that point on, though, it was all downhill for BC. The Wolfpack made its next 13 shots, en route to a 44-28 halftime lead. BC never got closer than eight points the rest of the way and dropped another ACC road game, 82-66.

Although Steffon Mitchell continued to struggle with his outside shot, his performance against N.C. State showcased just how talented the freshman really is. He recorded his fourth double-double of the season, with 10 points to go along with 13 rebounds, and further cemented his ability as an elite defender, logging another block to raise his total for the year to 32. Perhaps most impressively, six of those 13 rebounds were on the offensive end, earning the Eagles several extra scoring opportunities that were important on a night where they struggled shooting the ball. If Mitchell can continue to develop as a shooter, he’ll be a valuable piece for BC for the next three years.

Chatman entered Tuesday night with just a 21.4 percent clip from downtown in his previous four games, most notably going 0-of-7 in Saturday’s rivalry game against Notre Dame. In a season where BC has been incredibly reliant on its starting five, cold shooting nights from Chatman have been hard for the Eagles to overcome. Thus, considering Jerome Robinson’s limited production, BC needed every one of Chatman’s 17 points. Once again playing all 40 minutes, the former BYU transfer hit 7-of-14 from the floor and went 3-of-7 from 3-point range, keeping BC in striking distance for most of the game.

With a couple of notable exceptions, namely their blowout loss at North Carolina, the Eagles have managed to hold their own on the boards all season, despite losing one of their best big man in Teddy Hawkins to a season-ending injury less than a month into the year. Tuesday was no different, as the Eagles managed to outrebound a Wolfpack team with one of the ACC’s premier centers, Omer Yurtseven, 42-36. BC’s starting frontcourt of Mitchell and Nik Popovic managed to snare 11 offensive rebounds. Those few extra possessions helped keep the Eagles afloat all game long.

Robinson had one of his worst performances of the season Tuesday night. He was just 4-of-20 from the field, missing all six of his 3-point attempts and both of his free throws. To make matters worse, he also took a hard fall midway through the first half, sending him to the locker room with an elbow injury, effectively forcing the Eagles to play Vin Baker Jr. for an extended period of time. Often times this year, Robinson has been BC’s savior. But when he, let alone any one of the Eagles’ top-three guards, are off their game, BC is practically helpless on the road.

Free throw shooting has been one of BC’s strong points this season. In conference play, the Eagles are shooting 76.5 percent from the line, which makes Tuesday’s 4-of-12 outing from the charity stripe even more shocking. Popovic and Mitchell were the primary culprits, combining to go 1-of-6, but even the normally reliable Robinson, who is shooting 86.5 percent from the charity stripe in ACC play this season, missed a pair. The Eagles have very little room for error, even more so when they’re attempting to erase a double-digit deficit. Wasted trips to the line are all but a death sentence in this league.

BC’s struggles defending the perimeter have been noticeable all season long, and its bad habits were on full display against N.C. State. The Eagles were a step late contesting shots, often cheating too far into the paint to help on defense and failed to communicate effectively, which led to open 3-pointers all night long for the Wolfpack. At one point in the first half, N.C. State made seven-consecutive triples and finished the game 11-of-21 from beyond the arc. Against a team that ranks in the middle of the pack in 3-point field goal percentage, the Eagles simply had to defend the perimeter better to have a chance at coming away with the win. 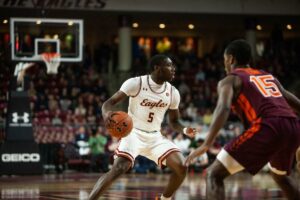