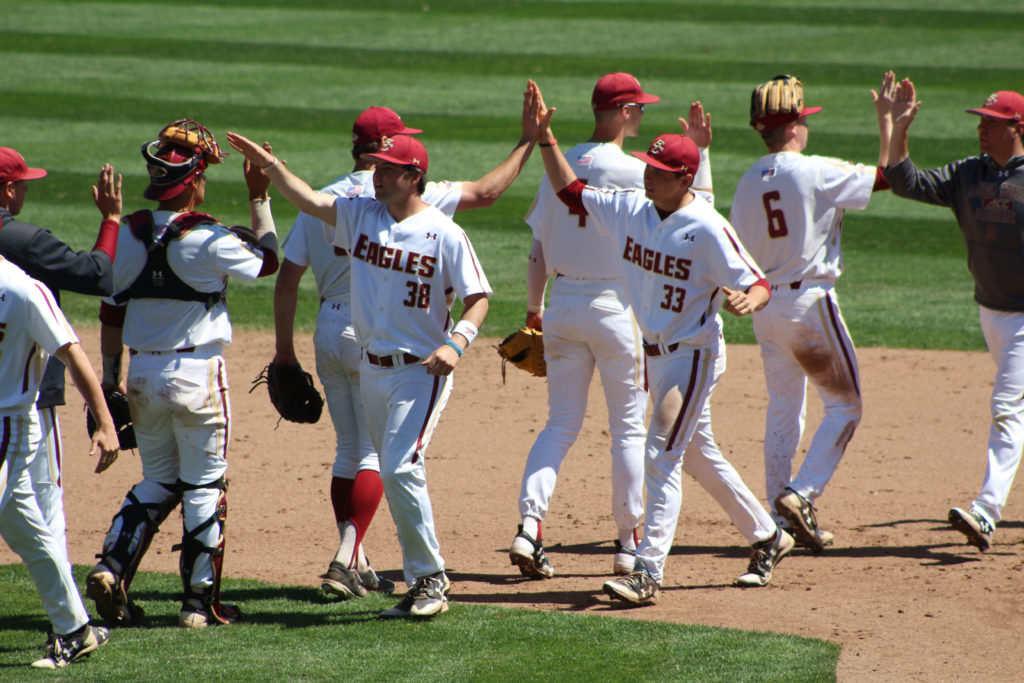 Entering the ninth inning of Sunday’s Snowbird Classic finale against Rutgers, Boston College baseball trailed by two runs and appeared to be headed for its third straight loss. The Eagles had been outscored 24-5 up to that point during their visit to Florida. Even worse, their offense started the weekend with just one run in the first 21 innings of play.

Then, desperately seeking to avoid a winless trip down South, the bats came alive. BC rallied for seven runs in the ninth inning and ended the weekend with a 11-6 win over the Scarlet Knights (2-4). The Eagles (3-3) evened their record, bouncing back from consecutive losses before heading into an eight-game swing that goes through the Carolinas.

BC trailed, 3-0, early, with reigning ACC Pitcher of the Week Brian Rapp lasting just four innings. The Eagles answered with RBI base hits from Chris Galland and Brian Dempsey to cut the lead, but Rapp quickly ran into trouble. He eventually exited, having given up six earned runs on nine hits, a far cry from his six no-hit innings against Santa Clara.

Down 6-2, BC gradually chipped away. Anthony Maselli brought in a run with a sacrifice fly in the sixth and Dante Baldelli scored on a passed ball in the following inning. The floodgates opened in the ninth

Rutgers reliever Blum walked Baldelli and Jake Palomaki to open the inning. Replacements Eric Reardon and Ryan Wares didn’t fare much better. Jake Alu legged out a bunt single, setting the table for a game-tying, two-run single from Gian Martellini. Scott Braren followed with an RBI single for the lead, Galland beat out an infield single for two more insurance runs, and Dempsey knocked in another two with a single.

Eagles relievers Will Hesslink, Carmen Giampetruzzi, and Thomas Lane combined to close out the final four innings. Hesslink, making his collegiate debut, spun a pair of 1-2-3 innings with a strikeout. Lane entered in the eighth, using a double play after consecutive walks to secure the win. It was a strong ending to the weekend for BC, even if it came down to the final inning for the bats to emerge from their slumber.

Minnesota rolled over BC in the Classic opener, chasing Jacob Stevens after just an inning and a third, en route to the convincing 14-1 win. Golden Gophers (5-2) starter Reggie Meyer held the Eagles to three hits over five shutout innings, and a methodical offense piled up the runs in support.

Stevens, coming off a strong season debut, gave up five earned runs on seven hits to take the loss. He didn’t get much help from his team, who couldn’t figure out Meyer and managed a lone run in the bottom of the ninth, with the game far out of reach.

The rest of the BC pitching staff didn’t have much luck either. Relievers Jack Hodgson and Jack Nelson were the only two of the Eagles’ six bullpen arms that didn’t concede a run, as the duo of John Witkowski and Brendan Spagnuolo combined to allow seven in just 2.1 innings of work.

The Gophers scored a run in the first off back-to-back singles, but quickly put the game out of reach in the following inning. Minnesota used a pair of RBI singles, a groundout, and a sac fly to stretch the lead to 5-0 after just two. It went on to score in four more frames, including a three-run fifth and a four-run eighth.

Once the dust settled, the Gophers had 14 runs on 16 hits, seeing 11 different players record a hit while 10 had at least one RBI. Ben Mezzenga and Terrin Vavra each went 3-for-4, while the first four batters in the Minnesota lineup drove in two runs apiece. Cole McDevitt also homered in the win.

It was an ugly day for the Eagles, who were fresh off a pitching and defense-led win to close out the Santa Clara series the weekend prior. The Gophers never had any doubt that they’d leave with a win, as the bullpen combination of Sam Thoresen and Patrick Fredrickson held BC scoreless until the final inning.

The Eagles’ Reyce Curnane logged his first collegiate RBI after coming in as a pinch hitter in the ninth, the lone bright spot on a three-hit day for BC.

The following day, it was Indiana’s Pauly Milito that guided his team to a 4-0 shutout of BC. Milito faced one batter over the minimum, twirling a complete-game shutout with eight strikeouts, surrendering just four hits while making the most of three double plays.

Milito was backed up by an early 3-0 lead—the product of a solo home run from Matt Lloyd, a sacrifice fly from Elijah Dunham, and an RBI single from Luke Miller. The Hoosiers (6-1) left eight runners on base, but with Milito dealing, it ultimately didn’t matter. Ryan Fineman added an RBI single to tack on some insurance. The loss went to Dan Metzdorf, who worked into the seventh inning but gave up three runs on 10 hits.

The first two games go to show how much the Eagles will lean on pitching this season—as the rotation and bullpen go, so will they. Scoring just five runs over three games is never a good sign for victory, especially when the pitching staff can’t seem to manufacture 1-2-3 innings when it needs them the most.