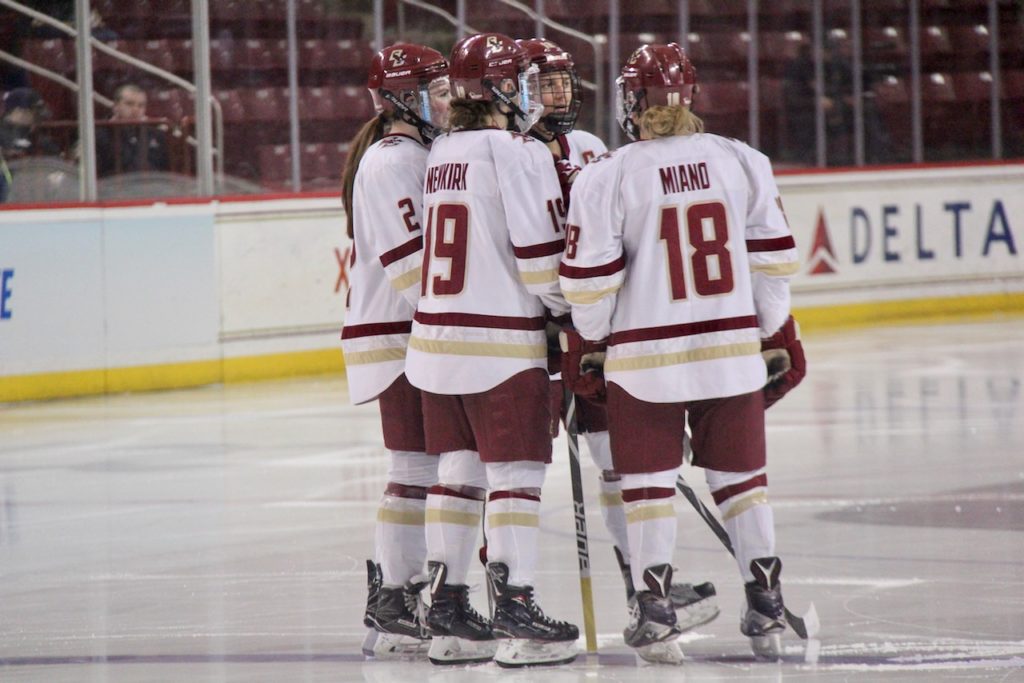 After falling in the NCAA quarterfinals at home for the first time in school history to No. 6 Ohio State, Boston College women’s hockey was left grappling, once again, with its legacy. The Eagles have had an unprecedented run of success under head coach Katie Crowley—the graduating class goes out as the winningest group in program history—but the truth remains that BC has yet to pull through on the biggest stage.

Under Crowley, who took over in 2007-08, the program has made nine NCAA Tournament appearances, reaching the Frozen Four six times. The Eagles have claimed five Hockey East regular season titles, three Hockey East Tournament championships, and five Beanpot trophies. Crowley’s 278 career wins on the Heights is over 200 more than the second-place mark.

The only problem, though, is that BC has years of heartbreak staring it in the face. The three-year span of 2011-13 featured three Frozen Four losses, two to Wisconsin, one in overtime. The Eagles faltered against nearby Harvard in 2015 in the semifinals—then in 2016 when they finally got a shot in the title game, they fell to Minnesota, 3-1. Pair that with another Frozen Four loss the next year and this season’s letdown against the visiting Buckeyes, and you have a BC team that has impressed year in and year out, but not quite when it matters most, going just 1-7 in the season’s final weekend.

It’s an unfortunate cloud hanging over Crowley’s head, even more so when confronted with moments like four-year starting goaltender Katie Burt’s saddened salute to the assembled crowd after the 2-0 loss to Ohio State, the ensuing applause serving small solace for a player who lost just 14 games in her four years—six in postseason play.

Still, purely looking at the abrupt endings to the seasons discounts the fact that year in and year out, Crowley’s Eagles are loaded with talent and in position to win. Plus, there’s a very large chance that if Megan Keller, Kali Flanagan, and Cayla Barnes weren’t in Pyeongchang with the United States Olympic team, BC would be hoisting the trophy in Minnesota, bolstered by incredible depth on the defensive side.

Playing with hypotheticals is enjoyable, but it’s important not to forget how well the Eagles played for much of the season—as evidenced by the mountain of awards that they compiled, even before entering tournament play. Here’s a look at everything that went down this season, as well as a look ahead.

Watts carved out her own niche in college hockey history, rolling over most of the country en route to a historic season. Not only did she post just the seventh 40-goal, 40-assist season in NCAA history, she tied a freshman record for goals scored (42) and finished with the second-highest points total (82). Watts led the nation in several categories, including points per game, power-play goals, power-play assists, and power-play points. The three latter categories showcased her tremendous capability to use her speed when space opened up, mercilessly slicing through the four remaining defenders.

It’s hard to wrap your head around some of her stats. The 18-year-old Canadian tallied points in 35 of BC’s 38 games, posting multiple points in 25 of them. It’s worth noting that she’s being hailed as “Canada’s next great women’s hockey player” by Sportsnet, the country’s number one sports outlet, and made an appearance on America’s top network as well. Only time will tell how Watts follows her impressive campaign, but the fact remains that the Eagles have the top player in college hockey for at least two more years.

Lost in the hubbub around Watts’s historic season is the fact that Burt established herself as the winningest goaltender in history. Win No. 115 to pass Minnesota’s Noora Rӓty came against Providence on Jan. 27, a 3-2 victory that also clinched the Hockey East regular season title. She left her mark on the program, to say the least. Burt took an accelerated path through high school to enter BC as a 17-year-old freshman, and she’s been incredibly reliable ever since. She already held the school record for career wins, save percentage, goals against average, and shutouts entering her senior campaign, and didn’t slow down, starting all 38 games and playing all but six minutes and 44 seconds of game action.

Without three Olympic-caliber defensemen, the Eagles were left grappling with a hodgepodge defensive depth chart. Enter Toni Ann Miano, who had sat out the second half of last year with a suspension, but returned better than ever. Miano quickly established herself as the conference’s top defenseman, earning the title unanimously in the postseason, and would go on to become a second-team All-American.

Caitrin Lonergan, meanwhile, played in the shadow of Watts throughout the season—but wasn’t someone to be taken lightly. Lonergan led the nation in assists (45) and finished seven points shy of her freshman teammate for the lead in points, a remarkable step forward for the sophomore. She earned second-team All-American honors and a top-10 Patty Kazmaier nod. Lonergan and Co. were aided by Makenna Newkirk, who would finish seventh in the country in points, netting 24 goals and adding an impressive 37 assists.

Additionally, Kenzie Kent finished off her prolific winter career by setting the BC career record for games played, finishing with a remarkable 157. She clocked out with the 27th-most assists in the country this season and served as a facilitator on offense, a key veteran leader on a youthful line.

Arguably the best moment for the Eagles came in the Beanpot championship game against rival Boston University, winning 4-3 in overtime. The Terriers, featuring a potent offensive attack with Victoria Bach leading the way, brought their best effort to Kelley Rink. After BC took a 2-0 lead in the first period, BU roared back, scoring three in the second period to put the Eagles on their heels. Watts answered in the waning minutes of the third period to equalize and force an extra frame, and it was Miano who made them pay—scoring the game-winner almost 15 minutes into overtime to win BC its third-straight Beanpot title and eighth overall.

The low could be divided into two parts—the back-to-back losses to end a season that featured the third-best record in school history. First, it was a disappointing loss in the Hockey East semifinals to upstart Connecticut, falling 4-2 to a team that they hadn’t been able to truly solve in the regular season. After tying the Huskies twice in three appearances earlier, Crowley’s squad scored first but would come out on the wrong side of the scoreboard against a stiff defensive team—who became the first seven seed to ever reach the Hockey East Championship, let alone the semifinals.

A week or so later, a well-rested and fourth-seeded BC squad fell flat against the Buckeyes, falling 2-0 to bow out of the NCAA tournament. The Eagles’ offense didn’t wake up until the third period, but as the old adage goes, it was too little, too late. Trailing by two goals, they fired 23 shots on Kassidy Sauve in the third alone, but she posted a 38-save shutout to seal the deal. Burt came away with countless impressive saves, but was outdueled on the other end of the ice.

Another tournament loss is disappointing, but with the loss of three talented defensemen, the season was far from a bust. Losing Burt, Kent, and Miano will create voids to replace—but the Eagles have plenty of talent incoming. Not only will three Olympic champions suit up next winter, but Crowley has assembled a more than capable class of recruits.

Announced back in November, per BCEagles.com, BC gains two players that were featured on their countries’ Under-18 teams. Forward Kelly Browne was a part of the U.S. U-18 team and earned plenty of praise from Crowley, described as “an elite forward who will make a great impact right away.” Burt’s replacement may very well be Maddy McArthur, a goaltender on Canada’s U-18 team that posted a shutout against her American counterparts in last year’s summer series.

Regardless of whether McArthur or current backup Molly Barrow is manning the net, chances will likely be hard to come by. Breaking through against Flanagan, Keller, Barnes, or the likes of Serena Sommerfield (plus-28) will be difficult. Pair that with a top-notch offense anchored by the country’s top-two returning scorers, and once again under Crowley, BC has the look of a national title contender—it’s just up in the air whether the Eagles can finally get over the hump.