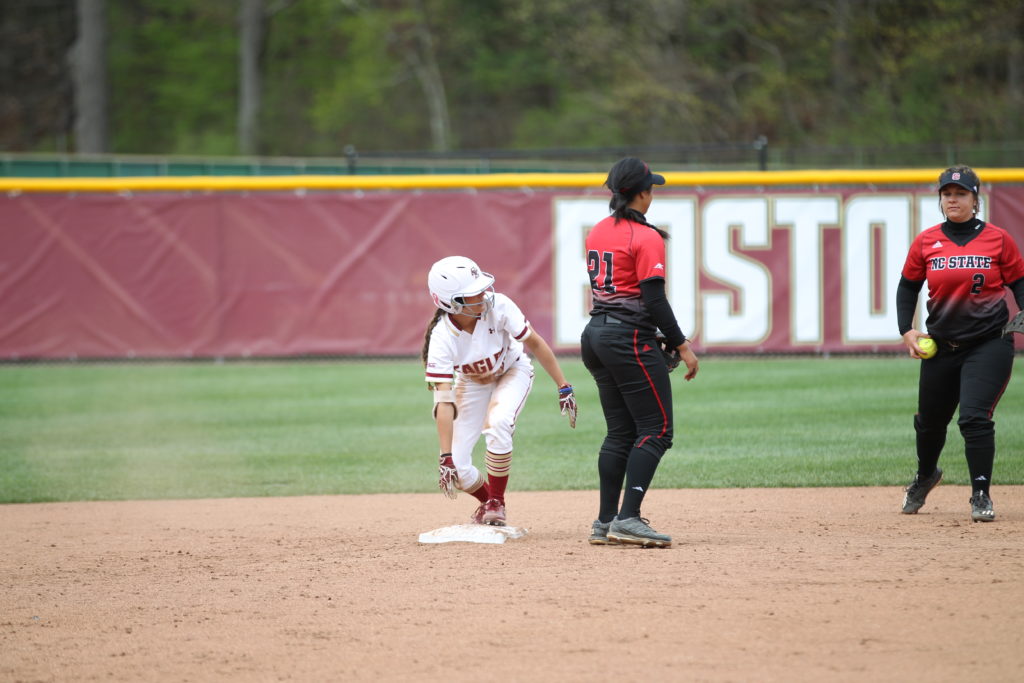 After winning its last four games by a combined 36 runs, Boston College softball found itself in a close game in the series finale against North Carolina State. Aiming for its 10th-straight victory—which would match the program’s longest win streak in 1995—the Eagles were deadlocked with the host Wolfpack through seven innings.

After three run-rule games in its last four outings, BC quickly proved that it could win the close ones, too. The Eagles took a lead in the top of the seventh and couldn’t close it out, but fared better the second time around. Two innings into extras, Jordan Chimento led off the ninth with a single, advanced to second, and raced home on Chloe Sharabba’s clutch two-out double to right-center. Annie Murphy followed with a RBI single after a 10-pitch at-bat and Allyson Frei capped off two-plus innings of scoreless relief to earn the victory, securing the series sweep with a 5-3 win in the finale.

The Eagles (19-15, 8-3 Atlantic Coast) continued to roll through conference opponents, winning their seventh-consecutive ACC contest. N.C. State (20-19, 4-10), meanwhile, saw its own slide stretch to five, clearly overmatched by its conference foes. BC’s stretch has been characterized by dominance in all facets of the game, and while the offense cooled off slightly in two of the three weekend games, the streak still soldiered on.

In Sunday’s finale, the Eagles had to fight late to escape Raleigh with the win. Trailing by a run entering the final frame, BC rallied, benefiting from Wolfpack reliever Kama Woodall’s poor control. The right-hander gave up a leadoff single to Emme Martinez, who was pinch run for by Delaney Belinskas. Chimento was hit by a pitch, then a pair of passed balls put both in scoring position. The Eagles tied it up after an error by the second baseman, then took the lead after Sharabba singled.

They couldn’t keep the lead, though. Dreswick had given up just two runs through the six previous innings, but would exit soon after. Tasked with finishing off the complete game effort, she ended up facing just two batters and departed—Madeline Curtis’ single and advancement to second on a throwing error was enough for head coach Ashley Obrest to bring in Frei.

Frei’s outing got off to a poor start. She struck out the first batter she faced, but instead of getting the game’s final out, instead conceded a game-tying double to Jade Caraway. She would settle down and hold the Wolfpack scoreless down the stretch, but it was a rare breakdown by the team’s duo of aces in an important moment. It ultimately didn’t matter, as the Eagles found two more runs to push across in the ninth—handing Woodall the loss.

On Friday, the two met for a doubleheader, the product of a poor weather forecast for Saturday. In the day’s opener, the Wolfpack jumped out to an early 2-0 lead but wouldn’t score again, falling 6-2. The Eagles did their damage in a trio of consecutive innings, taking the lead in the fourth with a three-run frame.

Chimento reached via a fielder’s choice with two outs in the fourth, and an infield single from Olivia Markopoulos and a walk of Sharabba loaded the bases. A costly throwing error from N.C. State third baseman Timberlyn Shurbutt brought in two runs, and the Wolfpack watched the only lead they’d have on the day slip away.

Another throwing error from Shurbutt scored two more runs in the fifth, and a wild pitch brought home one more. Paired with Carly Severini’s RBI groundout in the second, and the Eagles came away with the easy win. It was a disappointing game for N.C. State’s duo of Devin Wallace and Woodall, as they combined to allow a lone earned run but were still handed the loss.

The second game of the day didn’t require a comeback. The Eagles scored two runs in the first and would ultimately only need to play five innings, run-ruling the Wolfpack, 12-2, on the strength of a seven-run fourth inning. BC piled up 12 hits and took advantage of four N.C. State errors, while Frei struck out five, logging her sixth complete game of the season.

Leading 3-2 entering the back end of the game, the Eagles erupted. An errant throw from Wallace on a ground ball ended up rolling all the way to the fence in center to bring in a run, and it snowballed for the Wolfpack from there. Murphy, Cami Sellers, C.C. Cook all stroked RBI singles, Emme Martinez brought in a run with a sacrifice fly, and Chimento capped it off with a two-run single.

Frei didn’t run into much trouble throughout, allowing just five hits and issuing a lone walk. The redshirt junior had thrown three scoreless frames in the series opener, so she simply picked up where she left off to finish the day with eight solid innings—coming away with the win in both games.

The series featured both close and big wins for the Eagles, but the simple fact remains: They haven’t been bested in 10 games—a remarkable streak that has put the slow start to the season very far in the rearview mirror. BC has put everything on display during the streak, even winning games when its typical strengths go dormant. A midweek matchup with Massachusetts looms, as does a home weekend series against Florida State—the No. 13 team in the country—which will be a chance for the Eagles to see how they measure up against the ACC’s elite. 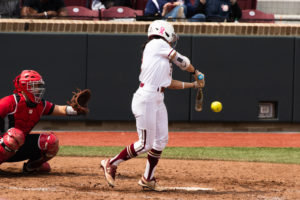 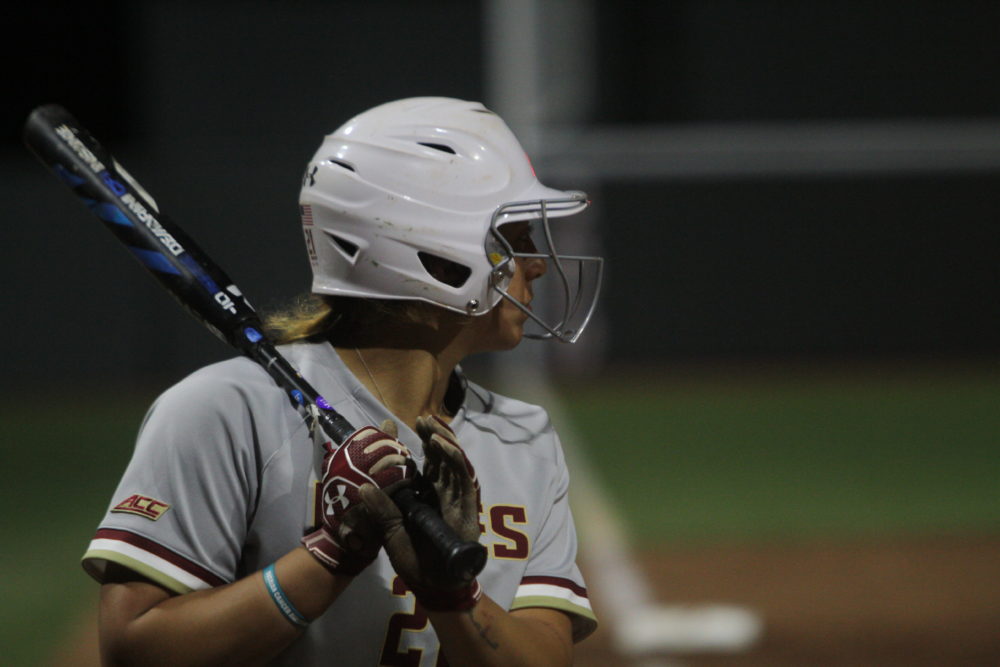