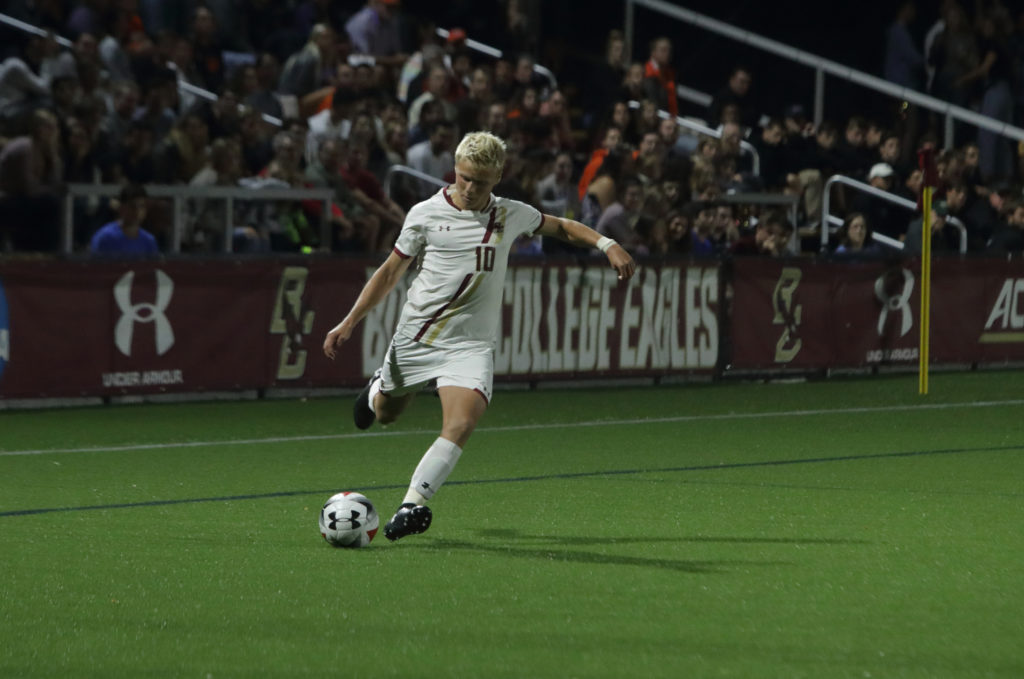 After a thrilling win over ACC rival Clemson, Boston College men’s soccer (2-0-2, 1-0 Atlantic Coast) will play a non-conference matchup against Holy Cross (0-2-1) at home on Tuesday afternoon. Last Friday, the Eagles had their fair share of struggles against Clemson—a team that had held BC scoreless in each of their previous six meetings—but just when it looked like head coach Ed Kelly’s group’s chances were fading, Simon Enstrom scored a pair of goals in the final 15 minutes of regulation. The 3-2 victory was the Eagles’ first over the ACC powerhouse since 2009.

Although it’s early in the season, BC has yet to lose a game and will try to keep the unbeaten streak going against Holy Cross. The Crusaders, on the other hand, haven’t entered the win column. Despite strong starts, Holy Cross has often lost discipline during matches, resulting in a handful of deficits. This is good news for Kelly and Co., who would like to maintain their undefeated record.

The match is available to watch on ACC Network Extra.

1) Enstrom found the back of the net twice against Clemson last week—his sixth multi-goal game of his career and 10th multi-point outing. He is in sixth place in program history in career points with 62 and sixth all-time in goals scored with 27.

2) Sophomore goalkeeper Antonio Chavez Borrelli tallied three saves against Clemson. He took a 1-0 lead into halftime by making a great save off a dangerous and unexpected shot. He has stopped a total of 14 shots this season, recording a 1.70 goals against average and a .737 save percentage.

3) Junior Trevor Davock and freshman Kristofer Kondradsson both have two assists on the year. And with Friday’s goal, sophomore Callum Johnson has now notched a point in two-straight contests.

2) Senior goalkeeper Henry Stutz has a 1.86 goals against average and .750 save percentage, not to mention a total of 18 saves this season.

The Eagles’ last meeting with the Crusaders was back in October 2010 at home. BC controlled the match from start to finish, dominating Holy Cross, 3-0.

It applies pressure all the way through the second half, thereby continuing to take shots on net. Enstrom and Johnson—two of the Eagles’ catalysts—are fast-acting and often go hand-and-hand on the run. If they can get to the ball, BC will have a good chance of finding the back of the cage. The Eagles also need to take advantage of each of their possessions and not make silly mistakes. If they remain strong on offense and alert on defense they will control the field and most likely come out on top.

It’s sloppy with the ball and experiences a hangover of sorts. Following a big win over Clemson, it could be easy for the Eagles to overlook a team like Holy Cross. BC will have to limit turnovers and make the most of its goal-scoring opportunities. The Eagles will have to work together to set up good shots on net against a goalkeeper who has a .750 save percentage and could be quite hard to get by. The only major threat BC could face is the Holy Cross defense, but if the Eagles play anything like they did on Friday night, they’ll be just fine.