Home » ‘The House with a Clock in Its Walls’ is a Waste of Time
Arts, Movies, Review

It’s quite fitting that a movie with so many clocks in it feels like it drags on forever.

The House with a Clock in Its Walls is a new children’s thriller fantasy film directed by Eli Roth and starring Jack Black and Cate Blanchett. It revolves around Lewis Barnavelt, an orphan who moves in with his uncle, a warlock named Jonathan Barnavelt (Jack Black), and his equally magical neighbor, a witch named Florence Zimmerman (Cate Blanchett), following the death of his parents. Lewis is, of course, not initially aware of the fact that his new guardians are both magical beings, but it doesn’t take him very long to figure it out. Unfortunately, the creators of this film clearly don’t have a solid grasp of what it takes to write an interesting and engaging fantasy story.

There is no sense of mystery or intrigue in The House with a Clock in Its Walls, because the film  shoves every last bit of expositional information down the audience’s throat instead of using visuals, or even some sort of natural dialogue, to tell the story.

For example, when Lewis finds out that his uncle’s house is magical and starts to freak out, Jonathan’s genius method of introduction is simply saying “Do you know what a warlock is?” Lewis replies to this obvious exposition by saying “Yes, it’s a boy-witch,” and for some reason the film decided that there was no further explanation necessary about what warlocks are, because it’s never addressed again for the remainder of the film. The only other even moderate tidbit of information about warlocks is that one must defeat an “evil spirit” by themselves in order to become one, which is the vaguest nonsense ever.

So naturally, Lewis becomes obnoxiously powerful within five minutes of screen time because Jonathan agrees to teach him how to harness magic, even though he specifically said moments beforehand that it would be physically impossible for someone to even come close to learning how to do that at Lewis’ age. Magic is also apparently not some hereditary thing, but something that anyone can learn if they just read a couple random old books and “focus hard enough.”

So at this point, the film is more than halfway over, and the audience will likely start to notice that literally zero conflict has happened yet. So, in the most insanely cliché plot device ever, Lewis decides to do literally the only thing that Jonathan forbade him from doing for the sake of impressing a kid at school, which unleashes his uncle’s evil nemesis, Isaac Izard (Kyle MacLachlan). He could have legitimately used any other kind of magic that he knew, which was quite a bit, but instead he decided to do the single spell he was specifically told to never attempt. It makes no sense and is about the laziest plot device that a writer can think up.

Then the Izard, whose face utilizes some hilariously bad motion-tracking CGI, shows up at the house and has about eight minutes of screen time before the script decides that Lewis is suddenly the most powerful warlock on the face of the planet and lets him defeat this villain, who was repeatedly described as the most dangerous and formidable person in the world, in one blow. Seriously, he does one thing and it saves the whole world, and that particular thing was introduced once earlier in the film for about 10 seconds, and at that point Lewis hadn’t even come close to learning how to do it, let alone using it to defeat the “greatest” warlock on Earth. Also, for some reason, Jack Black is turned into a baby in this scene, but his head remains regular-sized. On its own, that visual of Jack Black’s actual head on a baby’s body (which is, at most, half the size of the head itself) while the baby urinates uncontrollably, is reason enough to stay far, far away from this film.

The House with a Clock in Its Walls desperately wants to be the next Harry Potter, but despite its “best efforts”, it came out more like the Potter Puppet Pals with 41,999,950 extra dollars in its budget. Yes, this film had a budget of $42 million, and this is somehow what that money went towards. The individual problems with this film are too numerous to describe in anything less than a small novel, so here are a few glaring ones.

Eli Roth, a well-known horror director with little more than torture-porn films under his belt, directed this for some ungodly reason. The entire cast (except for Cate Blanchett, bless her heart) looks like they want nothing to do with this film. The pacing is awful and every plot point comes about in a horribly unnatural way because none of the characters’ decisions leading up to them are based in any sort of logical reality.

Simply put, this film is awful. Don’t see it unless you have put some sort of substance into your body that distorts your reality, because an alternate universe is just about the only place where this film even has a chance of being enjoyable.

jack black the house with a clock on its walls Cate Blanchett eli roth
Notebook: Despite Long Week, Eagles Unprepared in Purdue Setback
Plot-Heavy ‘Maniac’ Juggles Too Many Stories at Once 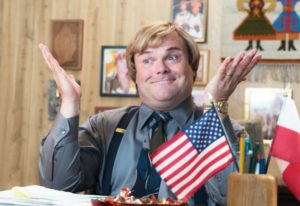