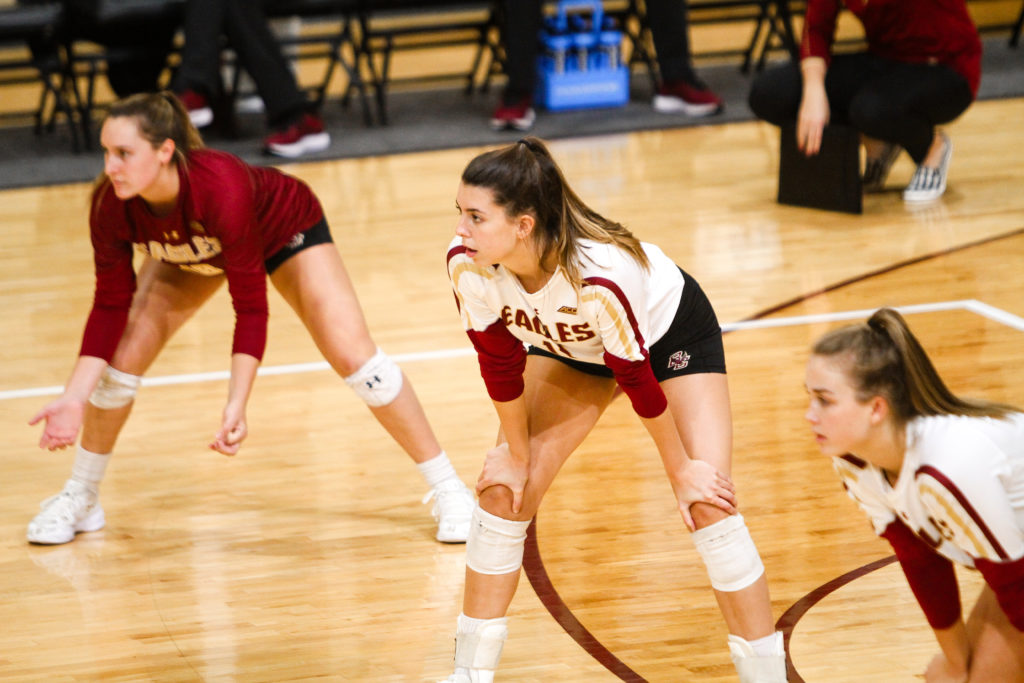 Boston College volleyball is enjoying a renaissance of sorts this season under first-year head coach Jason Kennedy. After recording just four ACC victories in 2017, the Eagles (12-4, 2-2 Atlantic Coast) won two of their first three games in conference in 2018. But like most renaissances, it takes time for things to come together completely, and for now, BC is still trying to figure out how to win on the road.

Going into Sunday’s match against Wake Forest (6-10, 1-3), the Eagles were just 2-3 in away matches, despite being undefeated at home, and had just been handed their worst defeat of the season against Duke in their first conference road match. And despite a back-and-forth affair that went down to the wire, BC eventually dropped its second-consecutive game, losing in five sets to Wake Forest.

At the beginning of the match, the two teams couldn’t have been more even. BC and Wake Forest traded points, with the Eagles establishing a narrow 8-7 lead. After that, it became a set of mini-runs. Right after BC finally gained some separation with a 16-14 advantage, the Demon Deacons fought back, winning three-straight points, thanks to two attack errors from Clare Naughton to take a 17-16 lead. The Eagles refused to fold, winning four of the next five points to take a 21-18 lead behind kills from McKenna Goss and Cat Balido, but Wake Forest had the last laugh, ripping off a 7-0 run behind two kills apiece from Caroline Rassenfoss and Caitlyn Della to take the first set, 25-21.

BC would rally in the second set, winning the first four points of the frame before Wake Forest came back with an 8-4 stretch of its own to tie the set at eight. Goss continued her excellent match by notching back-to-back kills, and Balido tacked on one of her own, putting the Eagles up, 13-10. The Demon Deacons rallied, taking a 16-14 lead into timeout, as Della logged two kills of her own and Wake Forest capitalized on a handful of BC errors.

Desperate to avoid a 2-0 deficit, the Eagles rebounded. Naughton struck for two kills, and BC responded with an 8-4 spurt, forcing the Demon Deacons to call two timeouts. After the break, the Eagles finished strong, as the dynamic duo of Goss and Balido each tallied another kill to deliver BC a 25-19 set victory, tying the match at one frame apiece.

In the third set, the teams again appeared evenly matched in the early going. Wake Forest was able to jump out to a 6-4 lead, but Jewel Strawberry came up with a kill, and Jane DeJarld followed with a service ace, knotting the frame at seven. Wake Forest then rattled off a 5-2 run, thanks in part to a service error from DeJarld to build a 12-9 lead and, from there, never looked back. Five separate Demon Deacons players notched kills, and Wake Forest outscored BC, 13-10, down the stretch, winning the third set 25-19 and restoring its lead in the match.

Two kills from both Rassenfoss and Paige Sebesta helped the Demon Deacons to an early 6-4 lead in the fourth set, but once again, the Eagles fought back, evening the frame at eight apiece as Naughton recorded two more kills The teams then began to trade points, matching each other kill for kill until an attack error by Madeline Holt gave BC a 15-14 lead. After an Eagles timeout, it was finally able to gain some separation, claiming an 18-15 advantage on a service ace by libero Makenzie Morrison. After the Demon Deacons got one point back, BC took the next six points in a row before Goss put the finishing touches on a great frame for the Eagles with one final kill, giving BC the fourth set 25-17 and sending the match to a winner-take-all fifth.

Much like the rest of the match, the fifth set was closely contested, with both sides seeking to grab momentum. This time, it was the Eagles that struck first, running out to a 4-0 lead, and an 8-3 lead before the switch after an attack error from Rassenfoss. Wake Forest steadily crawled back into the set, with two kills from Della, sparking a 6-3 run to trim the BC lead to 11-9. Kennedy called timeout, seeking to stem the Demon Deacons momentum, but out of the break Wake Forest won two more points to tie the set at 11.

Not to be deterred, BC swung the momentum back in its favor, taking three of the next four points to find match point, only to watch Wake Forest run off three-straight points of its own, sending the match to extra points with the Demon Deacons on top 15-14. In extras, BC twice was one point from winning, first at 18-17 and 19-18, but it eventually wasn’t to be. After Goss’s 14th kill gave the Eagles that 19-18 lead, Wake Forest mustered its last run of the day, winning three points in a row to take the fifth set, 21-19, winning the match in the process.

The loss drops BC to 2-2 in the ACC, with the bulk of the conference slate still to play. Even in defeat, however, it’s still encouraging that the Eagles were competitive in yet another conference match. The future appears bright for a volleyball program that’s been struggling for some time.