Home » On the Militarization of the Police 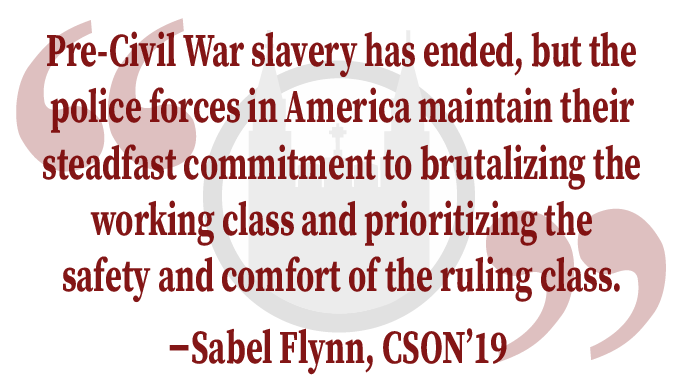 On the Militarization of the Police

A few weeks ago, the Boston College Police Department knocked on my door because I overslept and missed an hour of my clinical. At that point I was already happily on my way in an Uber to the hospital, but someone at the nursing school was still considerate enough to send someone to check on me. These events caused me to reflect on the role of police as a kind of personal guard for the upper class.

Basically, unless you live above a certain income bracket, you generally do not think of police officers as your friends, and you definitely do not get considerate wake up calls from them. For most Americans, cops uphold strict oppressions that generally deny them upward mobility. And as the income gap widens and conditions of the working class deteriorate, Americans have become increasingly critical of the powers that be.

Modern American policing has seen increased militarization in response to recent social unrest, and the norms and expectations of our relationship with the police force have seen significant change since their initial inception. To understand our relationships with police, I believe it is important to place American police in historical context. Northern American states had a loose association of sheriffs’ departments deeply involved in community aid and affairs, while southern American states’ police forces were originally established as slave patrols tasked with capturing people escaping enslavement. Sociologists and legal professionals make the claim that modern American policing is closer in nature to these southern slave patrol terror groups than to the northern community aid groups. The parallels between the slave patrol and modern policing are frightening and include mass incarceration and an extensive history of police brutality. Pre-Civil War slavery has ended, but the police forces in America maintain their steadfast commitment to brutalizing the working class and prioritizing the safety and comfort of the ruling class.

I often volunteer my time as a street medic, and I recently attended a counter-protest for a gathering of white supremacists. The police presence was unprecedented and unlike anything I have seen before. Not only the local police department, but also the state police, the National Guard, and the Depart of Homeland Security were in attendance. When I looked into my binoculars, I saw a person in uniform on top of a building, looking down the barrel of rifle. The rifle was pointed at the counter protestors. All over the country, police are criticized for being complacent and ineffectual in making arrests of white supremacist mob members. I was angry that the cops were facing us and attempting to kettle us rather than the white supremacists engaging in mob violence against the counter protestors.

Among the counter-protestors, I treated three trauma wounds, including that of a profusely bleeding reporter who was struck on the head. I was shocked by police inaction as brawls broke out, but to the experienced counterprotestor, it was business as usual to stand toe to toe with both independent and state arbitrators of violence and hate. This message was made very clear to me at one point—when the white supremacist group and the police formed a line together and closed in on the counter-protestors side by side.

My reflection on that day has left me with a disturbing consideration: Police are more concerned with the control of and terror against peoples’ movements for social justice than they are with maintaining a safe society. Police represent the interests of the generally white and rich ruling class and suppress any movement that challenges them. Slave patrol cops terrorized abolitionist organizers, and modern American cops and the FBI have a history of terrorizing organizers for liberation movements.

The crowd, fleeing from the cops wearing their riot gear and carrying rifles as the action concluded, dispersed while chanting, “Who do you serve? Who do you protect?”

When you interact with police on campus, understand that while we are on campus, we are the people they arbitrarily serve and protect. The greater community of Americans, however, is oppressed and brutalized by this pervasive system of violence. Why do we have a campus police? Do the police serve you? Consider these questions to form your own answer to the questions “Who do they serve? Who do they protect?”

student life bc police brutality
Nicomachean and Nicotine Ethics: Considering the Morality of the JUUL
Guest Column: A Letter to the Dean Calling for a Reconsideration of BC’s Alcohol Policy