Aishah Shahidah Simmons, a black lesbian feminist and award-winning producer, writer, and director of NO! The Rape Documentary, spoke about her personal experience of childhood sexual violence and its impact on her life and professional career in her lecture “Digging Up the Roots of Sexual Violence” on Wednesday.

The African and African Diaspora Studies Program sponsored the event, which was a part of the “New Directions in African and African Diaspora Lecture Series.” The series features “prominent scholars in the field of African diaspora studies,” according to its website. Five speakers are being featured during the 2017-18 academic year, and Simmons is the third lecturer to present. Her story lined up perfectly with the lecture series’ theme for this year, according to Régine Jean-Charles, associate professor of romance languages and a part of the AADS program: Arts Activism, and the Academy.

Simmons prioritized the stories of her family’s history of racial struggle with an emphasis on the specific struggles the women of her family tree faced. She recognized their experiences with slavery and labor work, along with their perseverance despite the limitations inherent to their race and gender, as the foundation of her experience as a sexual abuse survivor.

Simmons addressed the complexities of child sexual abuse within the context of familial loyalty. Through the #LoveWITHAccountability project, which she created, she has committed her career to holding family members who commit sexual violence accountable for their actions without infringing upon the blood bond shared.

Simmons opened her lecture by addressing the extreme sensitivity necessary when talking about child sexual abuse, as well as the silence that is most often paired with such heavy concepts. She stands by her self-assigned duty to break the silence on topics usually labelled too sensitive for public ears.

“I stand before all of you with a heavy heart, ignited spirit, some mild trepidation, because what I will address is often spoken about in hushed tones, if spoken at all,” Simmons said. “When is the right time to talk about child sexual abuse? Even in our heightened contemporary awareness about sexual violence, we still do not talk about child sexual abuse, especially when it happens in families.”

She spoke about the extensive amount of time it took her to gather the strength break her silence to her family and the obstacles she faced even in her moments of honesty. She held onto her silence for decades before confessing to her grandmother with Alzheimer’s when she was on her deathbed.

“I don’t know what she absorbed,” Simmons said. “What I know is that a shift happened within me after sharing with my grandmother. I, at 32 years old, was no longer afraid of the dark at the home where I was so loved, nurtured, and repeatedly molested. It was as if my grandmother’s spirit took that burden away from me”

In her youth, Simmons’s parents were award-winning global human rights defenders who traveled often. They were aware of her abuse and did not intervene. Since then, Simmons has turned the conversation over to those who are now in the shoes she wore long ago—who remain silent out of fear. She wishes to offer the support she lacked in the time of her struggle.

Simmons’s mother remained in deep denial until 2016, when she wrote about her own story and how she had come to realize she caused her daughter bystander harm. This additional aspect of support strengthened Simmons’s endeavors to bring the topic of child sexual abuse, especially within the family, into public conversation.

“The overwhelming majority of us are taught from birth that regardless of any transgression we experience from a family member, we must protect the family at all costs,” Simmons said. “When child sexual abuse survivors break our silence about the harm we experience, too often we are not believed, too often we are accused of being mentally unstable or not caring about those who ‘love us the most.’”

Update (10/30/18, 10:47 a.m.): This story has been updated to show the AADS program’s role in bringing Simmons to campus, as well as make two corrections. #LoveWITHAccountability is not currently a movement, as this article previously stated, it is a project created by Simmons. In addition, the article initially said that Simmons’s mother spoke publicly about her role in covering up the abuse Simmons received in Simmons’s documentary, when in fact she had written about the situation before that. The article has been updated to reflect that fact.

Featured Image by Jonathan Ye / For the Heights 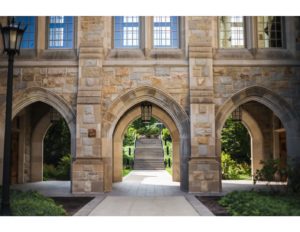