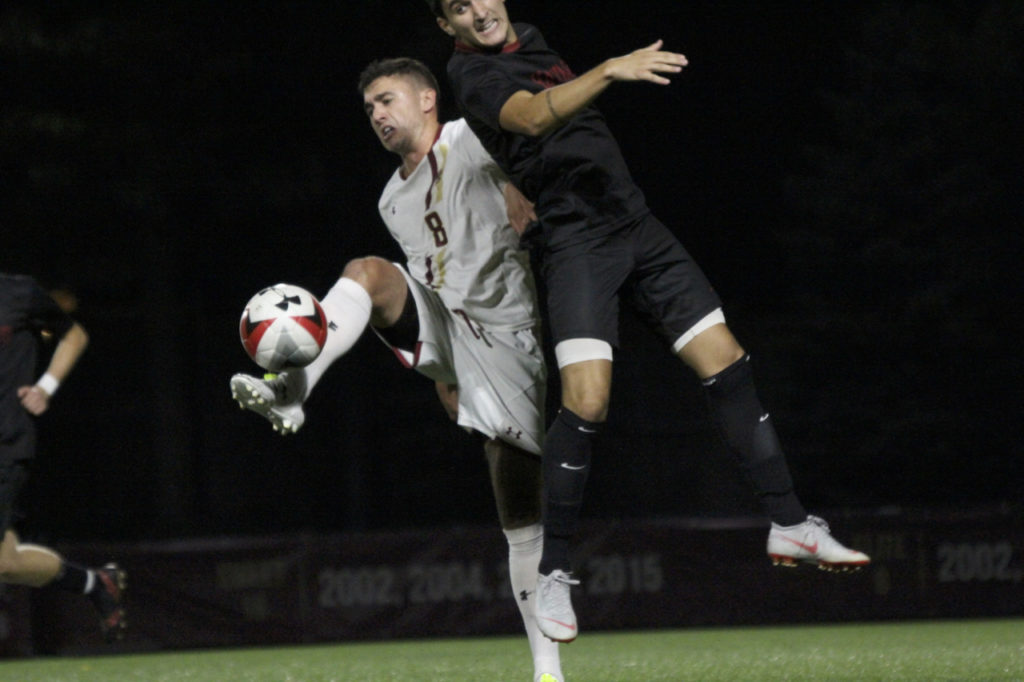 All Boston College men’s soccer needed last Friday to secure a first-round home game in the Atlantic Coast Tournament was a win against Syracuse. Yes, the Orange entered the matchup receiving votes in the top 25 poll, but the Eagles (4-7-4, 2-5-1 Atlantic Coast) had beat them the year prior and were looking to shake off a four-game skid. The result? An overtime draw that cost them a chance at hosting, even as the team ahead of them—and their eventual first round opponent, North Carolina State—suffered a painful shutout at the hands of Clemson. So BC will instead head to take on the Wolfpack (8-5-3, 2-4-2) in the classic 8- vs. 9-seed matchup, with the winner earning a chance to try to play spoiler in the second round against No. 1 Wake Forest.

Who is BC playing?
North Carolina State

Where is BC playing?
Dali Soccer Field/Track Complex, Raleigh, N.C.

How to Watch:
The game is available to stream on WatchESPN through ACC Network Extra.

1) An oft-repeated stat about the Eagles regular season has been how close every game has been, and it reflects why BC is a 9-seed. If it had managed to score one more goal in each conference game, the Eagles would’ve wrapped up the conference season with 13 points, a mark over double the one they finished with.

2) A BC player to keep an eye on is freshman Kristofer Konradsson, the team’s set piece taker. Konradsson, despite finishing sixth in the conference in shots taken, only scored twice on the season—and neither of the two came in conference play.

3) The other is obvious—forward Simon Enstrom. The senior enjoyed a productive season, finishing with a team-high 19 points as the only Eagles player in double digits. Enstrom had nine goals and an assist, and registered almost 50 shots, with 23 coming on net.

1) Finding the back of net has been far from easy for the Wolfpack this season—it finished tied for last in the conference in goals scored, with just 18 in 16 games. The struggles were particularly evident in ACC games, where it scored just six goals in eight games.

2) Forward Gabriel Machado leads the N.C. State offense with four goals this year, but in what is reflective of the second half slide his team underwent, three of the four came in the first five games of the season. His 10 points are tied for the team lead, but he hasn’t recorded a point in seven games.

3) The Wolfpack beat No. 4 North Carolina on Oct. 12, but any momentum that seemingly would’ve come from the victory quickly dissipated. It went 0-2-1 the final three games of the season and was outscored 7-1, with tough 3-0 losses coming to cellar-dwelling Clemson and Syracuse.

The Eagles had lost three in a row entering a matchup with then-No. 17 N.C. State, a team that was also on a bit of a slide—it’d recorded just two points in its last three games. The game was back and forth, but ultimately, it was Enstrom’s 61st-minute goal that was the difference as BC snagged three points and snapped a brief skid with a 1-0 win. The previous four meetings between the two teams had gone to overtime, so it was a season-defining upset for the Eagles.

All BC has to do to get to the second round? Replicate its result against the Wolfpack the last time out. The Eagles outshot their visitors 10-3, and none of N.C. State’s attempts found their way on frame. Konradsson fittingly set up Enstrom for the lone goal, and it’s a connection BC will look to repeat on the road. It will be far from easy, though, as the Wolfpack is 6-0-3 when it plays at the Dali Soccer Field. The Eagles were able to beat N.C. State when it came to Newton, but that was a consistent pattern for the Wolfpack during the season—it went just 2-5 away from home. Those numbers will have to shift if BC is hoping to pull the road upset, especially considering it hasn’t won a game since Oct. 9.