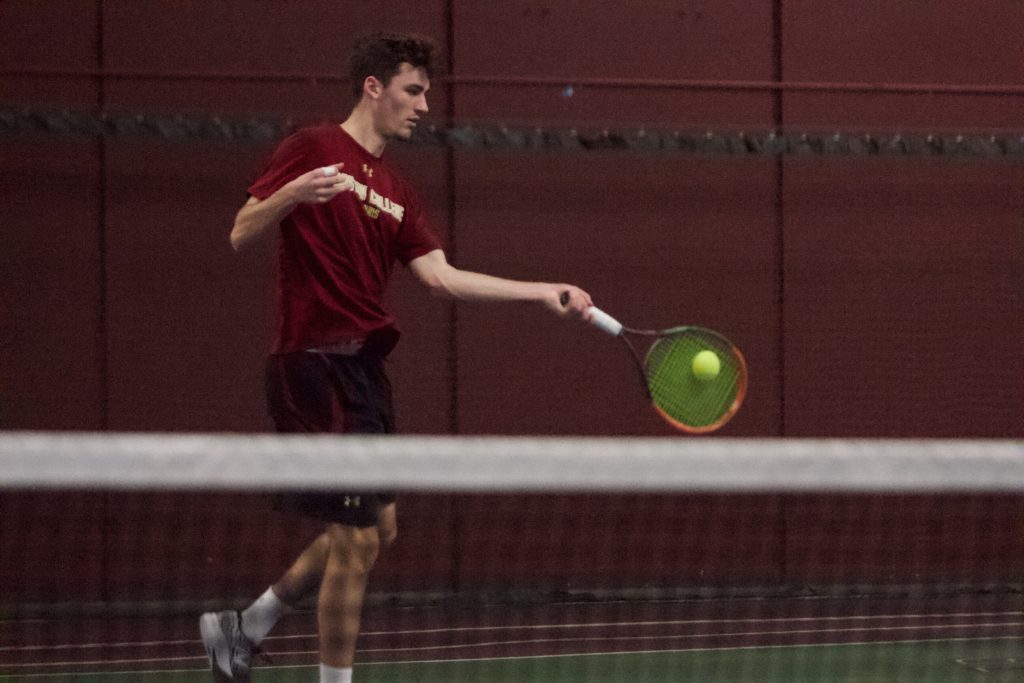 Fresh off a dominant win over Connecticut on Tuesday, Boston College men’s tennis entered the weekend with confidence and welcomed in Boston University on Friday night before a subsequent match against Southern New Hampshire on Saturday. The Eagles survived both tests of endurance this weekend, defeating BU and SNHU in succession to string together a three-match win streak before the start of conference play.

The Flynn Recreation Complex was home to strong play from BC over the weekend, with the team claiming 11 of the 14 points against its two opponents. The Eagles earned the doubles point in both matches, and it set the stage for both victories. While the victories didn’t come as easy as they did last year—a season in which BC dropped just one point between the two opponents—the Eagles still beat the Terriers, 5-2, and knocked off the Penmen, 6-1.

On Friday, BC (3-1) won the doubles matchup, with its No. 1 doubles team Derek Austin and Sean Mullins defeating the BU (2-4) duo of Owen Lu and Max Hartenstein, 6-0, to open the Friday slate. It was a dominant day for Austin and Mullins, who went 5-6 last season but are undefeated thus far. The Eagles’ No. 3 doubles team of Conor Mullins and Wills Tutecky went on to secure the doubles point, downing BU’s Max Stehling and Pete Siozios, 6-3. The strong start carried over to the single matches, with Austin, Max Mendelsohn, Sean Mullins, and Alexander Chieffalo all winning to secure the 5-2 victory. The setbacks came in the second and fifth singles pairings, with David Bogatin and Siozios claiming points for the Terriers. Both matches went to the third set tiebreaker, with Conor Mullins and Markus Norby falling.

Less than 24 hours later, the Eagles were back in action, with the Flynn Recreation Complex once again the stage for a prime men’s tennis matchup. Similar to Friday, BC’s No. 1 doubles pair of Austin and Mullins extended their winning streak, fighting past SNHU’s Bas and Will van Biezen in a tight 6-4 victory. After another pair of Penmen brothers—Miguel and Ricardo Marreiros—answered with a victory in No. 2 doubles, the Eagles’ No. 3 doubles team managed to snatch the doubles point yet again. Head coach Scott Wilkins opted for a different combination against SNHU and it paid off, with Santiago Montufar and Wills Tutecky winning their match in a thrilling fashion, 7-5.

Momentum firmly in hand, BC went on to largely dominate the singles matches. The only exception was when Bas van Biezen cruised past Sean Mullins, winning 6-2, 6-1 in the No. 4 singles match. That setback aside, Austin, Chris Grasel, Nordby, Chieffalo, and Tutecky were all victorious—with none of the matches going to a tiebreaker. The match of the day was found in the No. 2 singles, with Grasel needing every possible point to slip past Will van Biezen, winning by a 7-5 margin twice.

A three-match winning streak is always a boost, especially as the Eagles move into conference play against No. 13 Notre Dame on Friday and No. 12 UVA on Sunday. The Eagles are firing on all cylinders—they’ve dominated singles and gotten the most out of their doubles teams. While the trend throughout the first four matches has been sets that come down to the wire, BC still boasts a solid record heading into ACC play and will be tested for the first time when it takes on the Irish and Cavaliers.