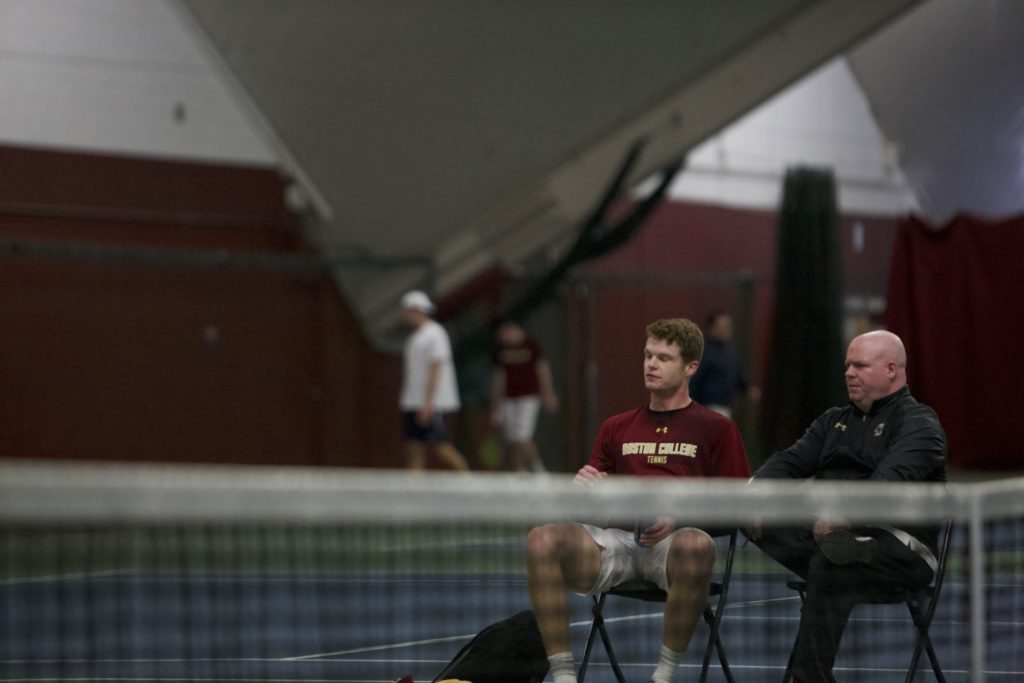 Entering Tuesday’s match, Boston College men’s tennis looked forward to a break from ACC play. Unfortunately for the Eagles, they have not had much success against Brown in the past—and that didn’t change on Tuesday night at the Pizzitola Sports Center in Rhode Island. For the ninth straight year, the nearby Bears triumphed over BC, 5-2.

The match started out on a high note for the Eagles, as BC (4-5, 0-3 Atlantic Coast) claimed the doubles point. Derek Austin and Sean Mullins won, 6-3, in No. 1 doubles, knocking off Roger Chou and Charles Tan, while Conor Mullins and Markus Nordby squeaked out a 7-5 victory over Peter Litsky and Ben Collier.

Austin maintained his momentum, pulling out a three-set win over Litsky in the No. 1 slot. Austin was the only Eagle to win his singles match, though, as Brown (6-3) ended the match by winning the next five singles bouts.

In the second slot, Ching Lam took care of Chris Grasel in straight sets, 6-0, 6-4. BC looked to retake the lead in the third and fourth matches, but narrowly dropped two three-setters. Nordby lost a tightly contested three-set match to Jacob Walker, 7-6 (5), 3-6, 7-5. Max Mendelsohn valiantly fought back from a thorough 6-0 first set defeat, but could not quite complete his comeback attempt, as he dropped the next two frames by identical 6-4 margins.

Despite the loss, BC continued to show resilience. Still, once again, the Eagles struggled to close matches. Tiebreaks and three-set matches have been points of difficulty for BC all season.

The Eagles will have two weeks off before they head west to take on U.C. Irvine. After that, BC will fully immerse itself in the ACC gauntlet. The competition will not get any easier, but BC has positives to take from their non-conference efforts. Realistically though, given their past history and this season’s start, it will be extremely difficult for the Eagles to find success within their league. Dipping below .500 with just three ACC games under their belt isn’t the best spot to be in.

BC Scholars Call for Reforms to Priesthood
Despite Second Half Rally, Eagles Fall to N.C. State in Overtime