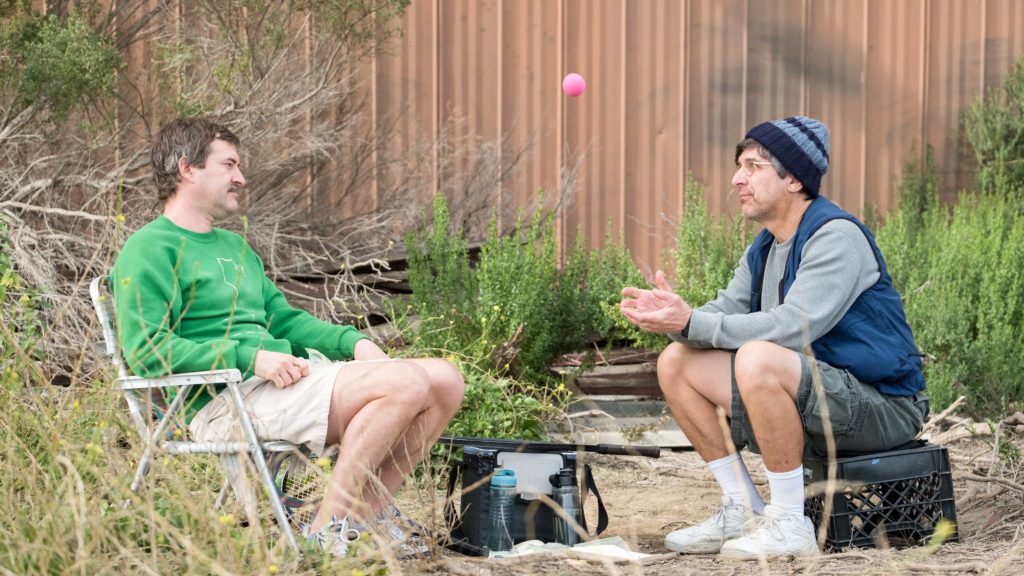 ‘Paddleton’ Finds the Mundane in Mortality

In the face of death, routine is a comforting thing. The greatest change that can occur in someone’s life is its end. But we can take the sting out of it by refusing to change anything. Michael (Mark Duplass) and Andy (Ray Romano) do the same thing every day. Their workday is mundane—Michael waving to Andy as he drives by every morning. They come home, and they spend the afternoon playing paddleton—a paddle ball-like game they made up. After that, they hang out in Michael’s apartment to do puzzles, eat pizza, and watch the same kung fu movie. Every night.

So, when Michael is diagnosed with terminal cancer at the start of the movie, not much changes for the two neighbors. They continue to go about their routine, and it appears to comfort them both. But this routine can’t last forever. Michael opts to take a dose of pills in a form of medically-assisted suicide rather than draw out a lengthy hospital and hospice process. To get the prescription, the two must go on a trip.

Here, Paddleton finds its stride. The film presents a delightful cocktail of bleak mortality, awkward interaction, conflict deriving from the stress and friction of the situation, and, of course, the humor that regular people insert into every situation, no matter how incongruous it may be. Paddleton makes the humdrum funny and the somber enjoyable. Seconds after Andy wakes Michael up in a panic—believing him to be dead—the film shares a light joke. Andy says goodnight and moves to turn off the bedside lights. When the lights click brighter, a soft “oh” is all he says. After this repeats twice more, Andy finally manages to turn the lights off, and the scene changes. It’s this expert depiction of the slow walk toward death combined with these small bursts of comedy that separates Paddleton from other movies about impending mortality.

While the script lays out the humor in scenes and in Andy’s incessant mumblings and bits of dialogue, it’s the force of the two leads that brings it home. Romano and Duplass are at their best in these performances. Both actors are nearly indistinguishable from regular people. Romano seems to have mostly left behind his more boisterous efforts at comedy like Ice Age and Everybody Loves Raymond for movies like like this (and The Big Sick). Instead, he is at once anxious, angry, sad, confused, and loving as Michael’s friend—much like we would expect a real person to be. Duplass is Romano’s foil. He is calm, he is aware, and he is well-adjusted. And it is this duality between characters that drives the emotional arcs of the film.

For much of the movie, it is Michael—who is dying—that is comforting Andy—who doesn’t know how to go on without his friend. Michael asks Andy to be with him at the end, and it is this emotional journey to that end that fills the space between normality and Michael’s death. Andy seems ill-equipped to operate in the real world, especially without Michael there to ground him. He has no other friends, he can’t engage in small talk, he tries in vain to subtly bolster his own qualities or accomplishments, and he is flustered by every bump in the road.

And, even at just over 90 minutes, Paddleton isn’t afraid to take its time. It strolls through the scenes, stopping here and there to pursue a divergent side plot to its end—and then pick up right where it left off. At times, this can feel slightly disconnected. But, in the same way that Andy tries to put off the inevitable, the film is in no hurry to get to the end.

Paddleton is much like the other movies that show up next to it on Netflix’s category system. It plays like a small indie movie. It is a slow burn, with soft colors and muted scenes. It has a small cast, relying heavily on its dialogue and more heavily on the pauses between. This is all to say that there is a lot about Paddleton that camouflages it in its surroundings. But there is more to this movie than that.
In the great practice of adding things to Netflix queues and then just rewatching Friends and The Office, this movie deserves more. Paddleton is a movie to sit down and watch with purpose—to be at once unconscious of and deliberately reminded of the slow advance of death.