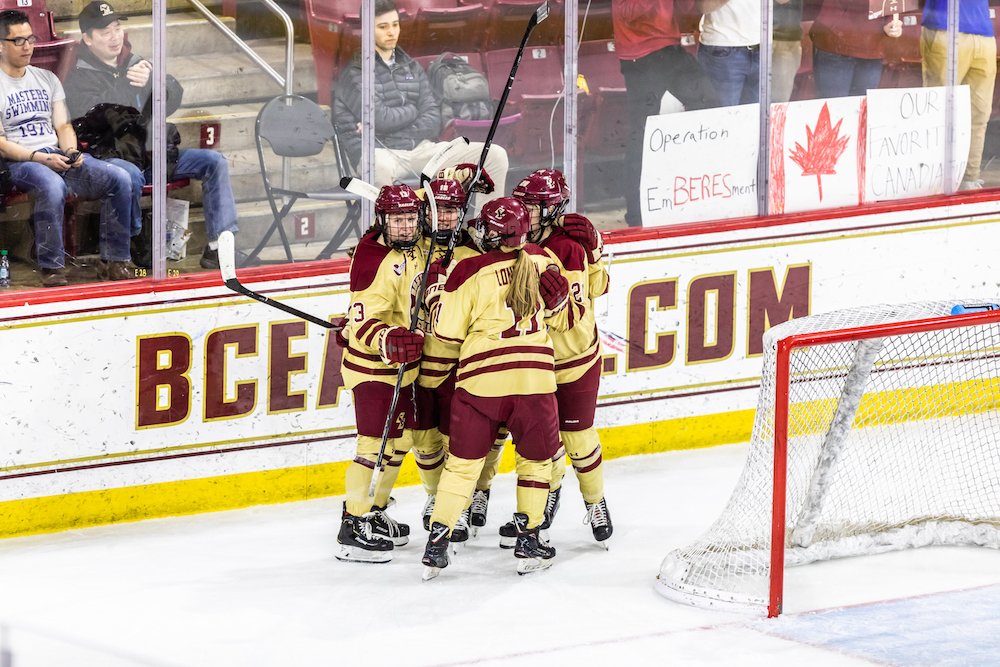 Unexpected Heroes Lift BC Past UConn to Hockey East Semifinals

When Boston College women’s hockey twice needed players to step up in the second game of the best-of-three Hockey East quarterfinals series against Connecticut, neither were household names. Three of the Eagles’ last four goals—including the game-winner in overtime and both that erased a two-goal deficit—didn’t come from the likes of last year’s Patty Kazmaier Award winner Daryl Watts, or a top-three finalist this year in Megan Keller. They didn’t even come from the top forward line, either.

Instead, head coach Katie Crowley got unexpected contributions from third-liner Erin Connolly, who singlehandely erased a 3-1 Huskies lead in the latter stages of the game, and second-liner Ryan Little, whose decisive goal nine minutes into overtime handed BC a dramatic 5-4 win that pushed them on to the semifinals for the ninth year in a row.

“We need all the lines working for us to continue to be successful,” Crowley said. “Today was one of those games where every line really helped us. The lines really gel for the most part and they really like to play with each other. They’re really starting to find their groove together, and that’s what we need.

“I’ve said it before, but I think this team is really special. They don’t care who gets the credit.”

Little, who scored just twice in the regular season, capitalized on a loose puck to the left of Huskies goaltender Morgan Fisher for a career-defining goal. Teammate Caitrin Lonergan had found Kelly Browne in the low slot, but Browne’s initial effort was turned away by Fisher. The goaltender couldn’t get a glove on it, though, and Little’s stick snuck in and slipped it past to prevent UConn (14-18-4, 9-14-4 Hockey East) from forcing a Game Three.

“I saw Caitrin move it toward the net, and I was just working and trying to get it in,” Little said. “I was just thinking, we need to get this puck in. It was a team effort.”

The goal erased the disappointment of letting the Huskies back into the game, especially after BC (25-10-1, 19-7-1) rattled off three unanswered goals and led, 4-3, entering the final two minutes. UConn, despite being outshot, 15-3, in the third period, was able to pull Fisher and capitalize with the extra attacker with 1:37 left on the clock, as Natalie Snodgrass tallied her second of the game. Neither team found an edge in the first nine minutes of overtime, despite both getting power-play opportunities, and the biggest chances prior to Little’s finish was when the puck skittered across the crease after a backhand from BC’s Cayla Barnes, and teammate Lindsay Agnew nearly stuffed home a rebound.

The dramatic victory was unexpected, seeing as the Eagles had cruised from the second period on in a 4-1 win on Friday night and had swept the regular season series without allowing a goal. Still, with Watts sidelined by Crowley midway through the game after getting banged up, BC was able to slot in freshman Savannah Norcross on the top line, erase a two-goal deficit, and fight back after the Huskies stole the momentum at the end of the game.

It was a remarkable showing from Connolly, who entered Saturday’s matchup with five goals on the year. With her team reeling after squandering an early lead and allowing three unanswered goals, Connolly decided to take matters into her own hands.

The junior from South Boston, Mass., boasting 37 points in over 100 career games played for the Eagles, scored with 0.2 seconds remaining in the second period, then tied it up under four minutes into the third period—an unexpected salvo that set the visiting Huskies back.

The Eagles, heavy favorites after a comfortable 4-1 win in Friday’s series opener, came out strong. Three minutes in, Agnew slipped behind the defense, and Makenna Newkirk spotted her cutting in, slotting a pass past a UConn defenseman. Agnew corralled it, skated into the crease, and deftly deked Fisher before burying a backhand on the wide-open net. While UConn had the balance of chances in the opening 20 minutes, outshooting its hosts, 10-5, the Eagles had better looks—Browne and Keller both rang shots off the post.

The inability to beat Fisher for a second time would eventually come back to haunt BC when the ice opened up for 4-on-4 play in the final five minutes of the period. The Eagles’ Delaney Belinskas was whistled for unsportsmanlike conduct and UConn’s Nora Maclaine sat for checking, and the Huskies took advantage of the freedom to move. Morgan Wabick found Snodgrass, who beat Maddy McArthur—BC’s freshman netminder that had stopped nine shots in a row to start the game—for the equalizer.

It was a back and forth start to the second period, with McArthur making two quick saves before Fisher was called upon for five saves in a three-minute span. The game swung in UConn’s favor, though, as the Huskies scored in the seventh minute. Snodgrass returned the favor by setting up Kayla Mee, and the visitors were off and running. A few minutes later, Barnes went to the box for interference, and UConn amped up the pressure. Snodgrass hit pipe before Danika Pasqua tucked away her own rebound, taking a two-goal lead in a surprising manner.

The Eagles regrouped, even stringing together five straight shots at one point, but Fisher had largely stood tall. One moment of weakness in the waning seconds was all it would take for Connolly, though, as the opportunistic forward tallied a backbreaking goal going into the intermission. With five seconds left, Maegan Beres flung a puck in the direction of the net, and Belinskas snagged it and sent it across the crease. Fisher was out of position and Connolly buried the no-doubter, throwing her hands up in celebration in what would prove to be a massive boost for the team. Her next goal was an even better finish, skating in and rifling a wrister past Fisher that went down as a solo effort in the scoresheet.

BC would take the lead a few minutes later, when Makenna Newkirk tucked home a rebound, but Snodgrass would answer to ultimately force overtime. There, Little was the hero, a vast improvement from the regular season finale against New Hampshire—one that ended in a draw after the Eagles failed to create anything in the extra period.

While the win wasn’t as comfortable as it likely should’ve been, considering the opponent, BC still advanced to the semifinals and doesn’t have to play what could’ve been its third game in three days. Crowley’s point about depth rings true—10 different players registered points on Saturday, and when lower-scoring players start to find their footing, the offensive attack only gets more dynamic.