The policy initiatives that Jane Doe Inc. (JDI), a Massachusetts coalition and advocacy organization concentrating on issues concerning sexual assault and domestic violence, is seeking from the Massachusetts legislature in fiscal year 2020 were discussed at a meeting at the State House on Wednesday.

The proposed policies include two potential bills relating to sexual violence on college campuses, as well as other legislation regarding sexual education, separation of law enforcement and immigration, and bills regarding increasing financing at-risk children.

Debra Robbin, executive director of JDI, explained that the issues JDI concentrates on are not only intersectional—minority populations in Massachusetts are among the groups most affected by sexual and domestic violence—but also require care and advocacy on many fronts.

Maureen Gallagher, director of public policy for JDI, explained the details behind the proposals. “An Act Relative to Sexual Violence on Higher Education Campuses,” originally drafted and passed in both the Massachusetts Senate and House of Representatives last year, intends to provide comprehensive legislation addressing colleges’ policies, prevention plans, and services for students experiencing sexual assault, according to Gallagher.

The bills were never reconciled, and, according to Gallagher, passing a collective bill is among JDI’s top priorities for this year. The bill’s lead sponsor in the House is Tricia Farley-Bouvier, while Michael Moore is the lead sponsor in the Senate.

The Trump administration is attempting to narrow the definition of sexual harassment and increase due process rights for accused students by changing the levels of evidence required to discipline students for sexual assault violations. The Title IX tweaks would also reduce what universities can be held accountable for, according to a Aug. 2018 New York Times article.

The Obama administration’s “Dear Colleague” letter that was released in 2011, which issued stricter guidelines for universities to follow in regard to Title IX-related matters, has already been rescinded by Trump’s education secretary Betsy Devos. Part of Devos’ department’s push centers around bringing back the possibility of cross-examination of both victims and accusers.

Boston College’s current Title IX policies involve an investigatory model, where an internal investigator and Title IX lawyer handle Title IX complaints. The change was made in 2014, and it is unclear how University policy will change if the Trump administration changes Title IX policy, since BC can stick with the policy it currently employs—the changes would allow, but not require, colleges to change how it processes Title IX complaints. BC is currently facing a $3 million lawsuit brought by an alumnus over the University’s alleged mishandling of a sexual assault investigation into the alumnus in 2012. At the time, BC’s policy was to handle Title IX complaints through a disciplinary hearing rather than an investigation.

The legislation proposed by JDI requires access to support on and off campus, as well as as requiring the protection of privacy and confidentiality. On the prevention side, students and staff will be required to receive education on sexual and domestic violence issues and available opportunities for counseling. That education would most likely come from modules outside the classroom similar to ones BC currently uses, such as AlcoholEdu or DiversityEdu, or programming from universities’ student affairs offices.

Gallagher said the federal government’s recent actions have also increased the importance of passing state-wide policy this year. The most pressing part of the bills is found in point seven in section 168D, which defines how institutions must investigate sexual and domestic violence issues. An investigatory model run by an official who must receive sexual and domestic violence training annually is required.

Advisors or a “support person” can accompany the accused student. The preponderance of evidence standard would be mandated by the proposed bill—the Trump administration is proposing that the federal government will no longer mandate that standard, giving universities the option to use a higher standard of proof. If colleges choose, they will be able to use the “clear and convincing” standard rather than the “preponderance of evidence” standard.

The “clear and convincing standard” means that, in the eyes of an investigator or disciplinary board, there is more than 50 percent certainty an alleged violation occurred but is not as strict as the “beyond reasonable doubt” standard used in court cases. The “preponderance of evidence” standard means that an investigator or hearing board is deciding whether an alleged infraction is more likely than not to have occurred.

Both sides will have equal opportunity to present evidence and witnesses, but the investigator can limit use of evidence that is based on prior sexual activity of a character witness. Direct cross-examination of the involved parties would not be allowed. Universities would be required to protect the identities of the reporting and accused students.

Another bill would require colleges to distribute sexual assault climate surveys to students at least once every two years. BC offered its first student experience survey, which included questions that would fulfill the potential state requirement, this past fall.

The next step for the bills is getting them through committees, followed by hearings on the operative text, according to Gallagher. She noted that JDI will advocate for early hearing dates in order to give the bill more time to go through the process. The House bill has been assigned to its Higher Education Committee, according to Gallagher, and she anticipates that the senate’s Higher education Committee will handle the senate bill when it gets assigned.

BC’s Clery Crime Report statistics from this past fall did showcase an increase in reported sexual assaults and groping incidents. The numbers reported in the statistics reflect reports of alleged incidents of sexual violence, but it’s unclear to administrators both at BC and nationwide whether the increases are a result of more reporting as the culture surrounding seeking help has become more open or if another instigating factor is at work.

“Boston College strongly urges students to report any incidents of sexual assault,” University Spokesman Jack Dunn said at the time. “We have been aggressive in our efforts to encourage reporting in an attempt to bring an end to sexual violence on campus.”

Gallagher also laid out the amount of funding JDI is recommending the state commit to sexual and domestic violence support and services in fiscal year 2020. Currently, over $37 million is committed to prevention and treatment. Gallagher noted that JDI is proposing, with the support of Massachusetts Governor Charlie Baker’s office, a $500,000 funding increase concentrated on sustaining funding for rape crisis centers and community-based domestic violence programs.

JDI is also asking for an $850,000 funding increase to the Healthy Relationships Grant Program, which will be put toward the development and implementation of violence prevention programming. 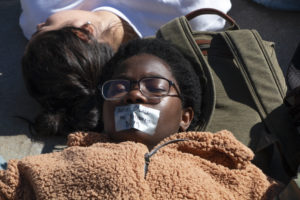 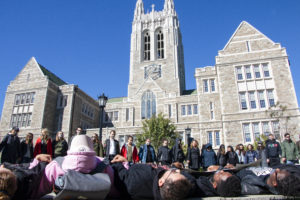