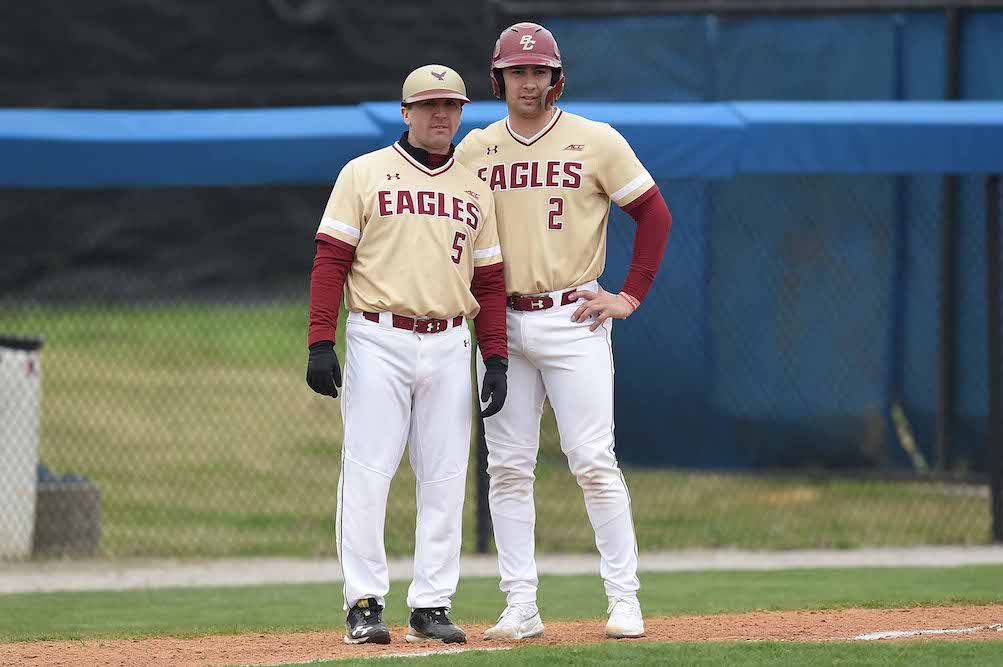 It was an up and down weekend for Boston College baseball in Kentucky, as the Eagles took both games against Eastern Kentucky but faltered twice to Evansville. BC (6-4) received strong pitching throughout, with no opponent scoring more than four runs—but the lineup was inconsistent and let two winnable games get away from it after missed chances with runners in scoring position. Still, two losses to an Evansville side that managed just 12 wins all of last year is a missed opportunity, yet the Eagles were able to salvage the weekend with a sweep of the host Colonels.

Through six innings, the weekend finale for the Eagles had the making of a pitcher’s duel that was going to come down to the wire. BC freshman Mason Pelio was dealing, needing just 86 pitches to cruise through six innings of one-run ball, and he had a match in Colonels (7-5) southpaw Brennan Kelly, who set down the first 12 batters he faced and also only allowed a run. Then, in impressive fashion, the Eagles erupted for eight runs in the seventh inning, working through three Eastern Kentucky pitchers en route to a 13-2 drubbing.

Patrick Burns opened the scoring by drawing a bases-loaded walk, then Jake Alu cleared the bases with a double to left center. That was enough to chase Kelly, but reliever Jacob Ferris didn’t fare much better. Ferris gave up four straight hits, with Chris Galland driving in a run with a single and Brian Dempsey lacing a two-run double into left field. He’d exit after giving up another RBI single, this one to Jack Cunningham. His replacement, Nick Laster, finally ended the frame, but that wouldn’t be it for the Colonels’ bullpen. Darren Williams coughed up a grand slam to Cody Morissette in the ninth inning, a fitting end to a blowout defeat.

Pelio added a scoreless seventh to cap off a phenomenal start, as he allowed five hits and one walk while striking out six. Travis Lane closed out the game, allowing a lone run over two innings while striking out three. His start didn’t go to waste, either, as all but one member of the Eagles’ lineup scored a run. Dempsey led the charge, going 3-for-5, while Cunningham, Morrissette, and Dante Baldelli all had multi-hit days.

Despite gifting the Eagles a run in the first inning after a pair of errors, Evansville (5-5) responded by chasing BC starter Zach Stromberg after just two and two-thirds innings, built a three-run lead, and fought off a late rally to sweep the two-game set. Aces starter Nathan Croner pitched into the seventh, and while the Eagles struck for two runs—consecutive bases-loaded walks—they ultimately couldn’t complete the comeback.

BC didn’t steal a base for the first time all season, and the lineup struggled to string together hits. It went down in order to Croner three separate times, then couldn’t do anything with two-out singles in a pair of other innings. In the seventh, with the bases still loaded after Jake McMahill walked in a pair of runs, Evansville turned to closer Austin Allinger for a seven-out save. He got Dempsey to ground out to leave the bases loaded, then escaped a pair of jams in the next two frames.

First, he worked around a Cunningham leadoff double in the eighth, stranding the first baseman on third by inducing a flyout from Lucas Stalman who was making his first career start as one of five freshman that have appeared in the starting lineup this season. Next, Galland tripled with two outs in the ninth, but Allinger again proved elusive, getting Sal Frelick to ground out to first. It was a painful game-ending groundout for Frelick, who saw an eight-game hitting streak to open the year snapped with an 0-for-4 day.

After losing an early 2-0 lead, the Eagles found themselves in a 3-3 game in the top of the sixth inning. With two outs and two runners on—Morrissette reached on a fielder’s choice, and Baldelli drew a walk—Alu stepped up having gone 0-for-3 on the day out of the nine hole in the BC lineup. That didn’t matter, though, as the senior third baseman deposited a 1-0 pitch over the right field fence for a go-ahead three-run home run that secured the team’s first win of the weekend.

“Against a left-handed pitcher that’s tough against lefties, Alu had a really veteran at-bat,” head coach Mike Gambino told BCEagles.com after the game. “The [pitcher] made a mistake when he was ahead in the count and Jake put a great swing on it. Jake’s a really good college baseball player that helps you win.”

Alu’s home run put the Eagles on top, but they still had to fight off a comeback effort from the Colonels. Starter Matt Gill ran into trouble in the sixth, leaving with two runners in scoring position, and reliever Travis Lane entered and gave up a sacrifice fly to Brent Lovell. Soon enough, Lane settled in and retired six of the next seven batters he faced. Then, Gambino played a matchup, and Joey Walsh managed the last out of the eighth. Walsh returned for the ninth and gave up back-to-back singles with one out, but even with the game-winning run at the plate, he beared down and got a strikeout and a groundout to end the game.

BC led out of the gates, the product of the top-three hitters in the lineup combining for seven hits. Galland singled and stole second in the first inning, then came home on a Frelick triple—who then scored on a Dempsey groundout. Frelick added an RBI single in the sixth, bringing Galland in again as part of a 3-for-5 day from the freshman standout.

Gill earned the win, going five and two-thirds innings with two walks and two strikeouts. He’s enjoying a strong start to the 2019 campaign, holding opponents to a woeful .143 batting average against while registering two victories and a no-decision.

The weekend didn’t get off to a good start for the Eagles, as Aces junior right-hander Adam Lukas spun seven scoreless innings with six strikeouts and had more than enough offense to back him up in a 4-0 win for Evansville. Lukas combined with reliever Michael Parks to shut out BC, no small feat seeing as the Eagles had scored at least seven runs in five of their first six games.

BC freshman Joe Mancini made his second start in a row and went five and two-thirds innings in the loss, allowing two earned runs while striking out six. Mancini coughed up a solo home run to Aces first baseman Tanner Craig to leadoff the second inning, then was chased in the sixth after giving up a RBI double to Craig Shepherd.

The Eagles kept it close into the eighth, but squandered several chances throughout. After Lukas set down the first eight batters, Baldelli singled and Galland reached on catcher’s interference, but they’d become two of nine runners left on base after Frelick grounded out. Morrissette was thrown out at the plate in the fifth after trying to score from third on a Ramon Jimenez grounder to third, while Frelick was stranded on third in the sixth after a one-out double and stolen base.

Reliever John Witkowski would allow a pair of runs in the top of the eighth, but neither were earned. A throwing error from Morrissette extended the inning and brought a run in, and Nate Reeder followed with a RBI double. BC would threaten in the later innings as well against Parks, but the Evansville southpaw got three straight outs after allowing back-to-back singles in the eighth and struck out two of the last three batters he faced to record a save.