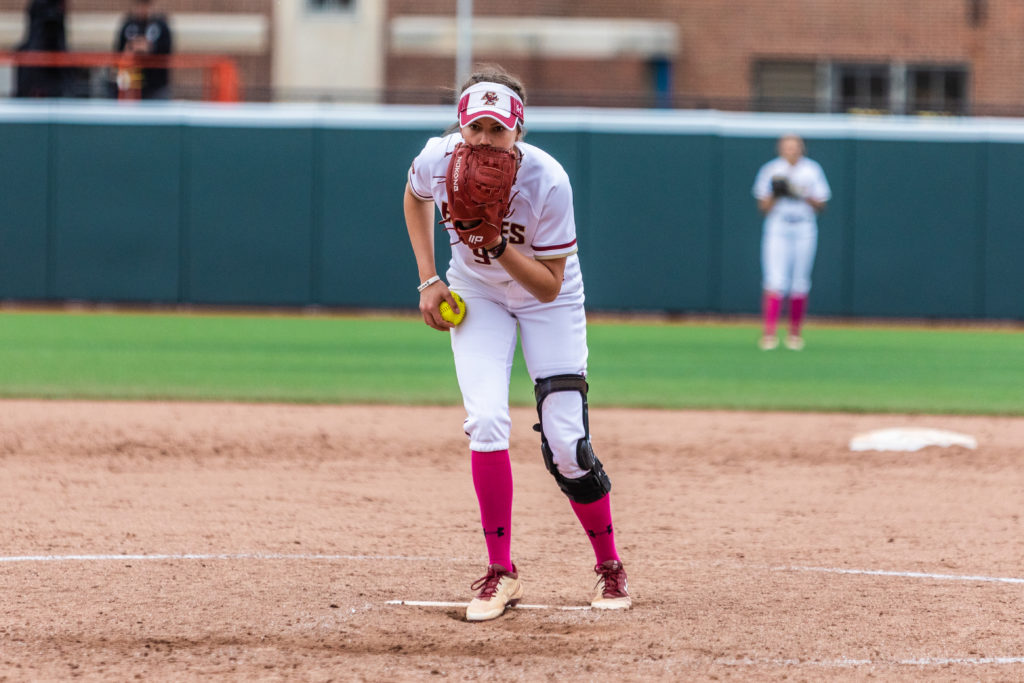 Boston College softball has struggled in the circle throughout this season. Entering their series finale against North Carolina State, the Eagles’ pitching staff had posted an earned run average of 4.29, third-worst in the ACC. And through 29 games, BC gave up eight or more runs on 11 different occasions.

After notching a comeback victory and following that up with a disappointing defeat on Friday and Saturday, respectively, the Eagles entered Sunday seeking their second straight series victory. But that plan didn’t come to fruition. BC dug itself a massive hole right from the get-go, allowing six runs in the first inning and 10 more the rest of the way. As a result, the Wolfpack cruised to an easy victory, 16-9.

Originally slated to start at 12 p.m., the game was pushed up to 10 a.m. in order to avoid rain that was forecasted in the afternoon. Camryn Dolby started the contest for the Eagles (11-19, 3-6 Atlantic Coast), but she found herself in trouble very early on. After allowing Sam Russ and Logan Morris to get on base, Dolby gave up a three-run home run to Brigette Nordberg. Still, Dolby could not gain command. The freshman then walked Skylar Johnston and hit Randi Farricker with a pitch.

Head coach Ashley Obrest had seen enough, pulling Dolby and replacing her with Susannah Anderson, who also couldn’t silence the N.C. State (19-15, 2-7) bats. First, Anderson walked Angie Rizzi to load the bases. Then, the Wolfpack scored a run off a Jenna Ergle error. April Visser completed the scoring with a single, drawing in two runners. Obrest made her second pitching change of the inning, removing Anderson in favor of C.C. Cook. The sophomore stopped the bleeding with two fly-outs.

BC did narrow the deficit in the bottom of the first, taking advantage of a wild pitch and an error to score two runs. But, by this point, the damage had already been done, as the Wolfpack had built an insurmountable lead. Both teams traded runs in the second inning when N.C. State’s Angie Rizzi had a RBI groundout and BC’s Lexi DiEmmanuele hit a triple to drive in Carlie Sanders. On the afternoon, DiEmmanuele hit 3-for-5 with two triples and two RBIs.

Over the next three innings, each team scored a single run before the Wolfpack once again exploded in the sixth inning. Cook, who had been pitching well and had only given up two runs in 4 2/3 innings pitched, began to unravel. Hits by Morris and Farricker batted in two more runs, and a single by Chandley Garner, combined with an error by the Eagles, scored both Farricker and Johnston. A wild pitch in the bottom of the inning by N.C. State’s Sydney Nester plated a run for the Eagles, but the Wolfpack held a sizable 12-5 lead.

Even though the Wolfpack sported a seven-run lead, it refused to let up. Cook remained in the game, and she could not regain control. After walking both Russ and Morris to start the inning, Cook gave up a single to Nordberg, which loaded the bases. Johnston picked up her second hit of the afternoon, a single, which—paired with yet another BC error—guided two runners home. Cook was relieved by Kendra Friedt, who cleaned up the last batters, but not before coughing up a two-run double to Rizzi.

While the Eagles faced a massive deficit, they didn’t give up. A triple and a single by DiEmmanuele and Ellie Mataya, respectively, scored two BC runs. Nester, who pitched 5 1/3 innings, was pulled for Brittany Nimmo. Nimmo gave up two more runs before dispatching the Eagles for good.

Following this series, BC now stands at eight games under .500 and possesses the second-worst overall record in the conference, only ahead of Pittsburgh. The three-game set marked a great opportunity for the Eagles to pick up a couple wins. Coming into the weekend, the Wolfpack was winless in the ACC, but at BC’s expense, it picked up its first two conference victories of the season. At this time last year, the Eagles found themselves in the midst of a 13-game winning streak, a stretch that propelled them to their third consecutive 30-win season. If the Eagles fail to string together more consistent results in the near future, then it will be quite difficult to reach that 30-win plateau for the fourth year in a row.

Letter to the Editor In Response to: “Upcoming ‘Lies Feminists Tell’ Event Sparks Controversy on Campus”
Members of the BC Community Pay Tribute to Patrick Gregorek, MCAS ’19