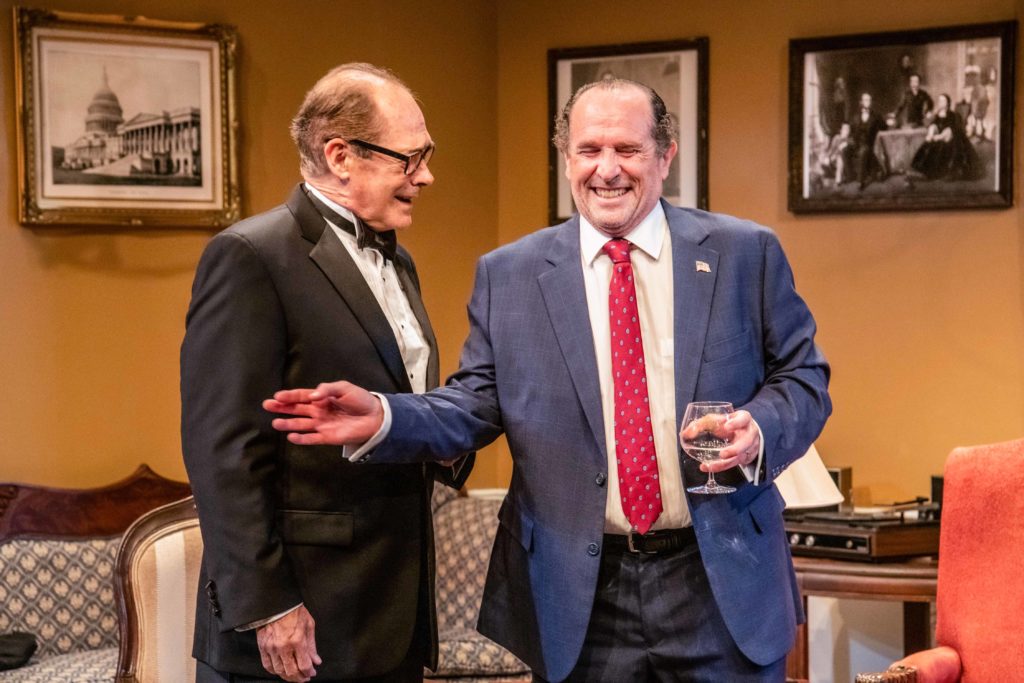 Humanity and Humor in ‘Nixon’s Nixon’

As audience members walked through the doors of The New Repertory Theatre, they were met with a scratchy recording of Richard Nixon’s voice filling the theatre. Ninety minutes later, they heard it again. This time, instead of background noise, the recording served to announce Nixon’s 1969 resignation from his position as the 37th president of the United States.

The set of Nixon’s Nixon appears to be a formal and elegant living room where two well-dressed men are conversing, but the larger context quickly becomes very apparent. The living room is in the White House, the men are President Richard Nixon and his Secretary of State Henry Kissinger, and the conversation is about Nixon’s inevitable resignation.

In the wake of the Watergate scandal, Nixon called Kissinger into his office to talk about what they should do next. Nixon’s Nixon imagines this real situation through a fictional, satirical, and eerily relevant lense.

Jeremiah Kissel, acting as Nixon, and Joel Colodner, acting as Kissinger, skillfully display the tension that existed between the real politicians throughout Nixon’s time as president. On the evening of their downfall, the pair frantically reenacts their glory days, stepping into the shoes of those who have complimented them in the past. They pause to revel in their prior praises or to insult each other.

As an increasingly unhinged Nixon downs drink after drink and an increasingly uneasy Kissinger urges him to resign from presidency, the deeply personal agenda of both men surfaces. Nixon is concerned not with the state of the country in the wake of his betrayal, but rather with the fate of his own legacy. While Kissinger originally expresses the voice of reason, this takes a sharp turn when he realizes that he too is implicated in the incriminating tapes.

Kissinger, upon realizing that it is in his own best interest to keep Nixon in office, changes tune, and it is only when the fate of both men’s egos begin to ride on the same agenda that the play, while remaining humorous, becomes significantly more disconcerting.

In an almost manic state, Nixon and Kissinger discuss their options, which range from colluding with the CIA to triggering a nuclear war of which Nixon would then save the United States from. At this suggestion, Nixon is seen gleefully standing on his chair and miming the explosion of bombs with shouts of “KABLOOE, KABLOOE.”

Glimpses of Nixon’s softer humanity are shown when he mentions his daughter, Julie, and when he ultimately recounts the number of deaths that have been caused in some relation to his presidency, and yet these themes are in direct conflict to the motives of his ego that drive the plot.

On a surface level, Nixon’s Nixon both showcases and satirizes a significant historical event through the eyes of the men involved. On a deeper level, however, the play exhibits the way power corrupts and how, once acquired, it can be incredibly difficult to let go of.

The simple set and small cast allow the focus of the play to entirely surround the characters and the conversation. Although the setting and characters stay consistent from beginning to end, the logic, reason, and arguably sanity of Nixon and Kissinger alarmingly devolve.

Nixon’s resignation is, as we know, ultimately inevitable, but the play closes with the clear sense that Nixon is resigning not out of morality but out of necessity, and Kissinger is left behind, still desperate to save his own skin.

The performance speaks about power to serve the ego, not the world, and through a humorous lense tinted with a touch of reality, it sends an ominous message as to how far those who gain this power will go to maintain it.