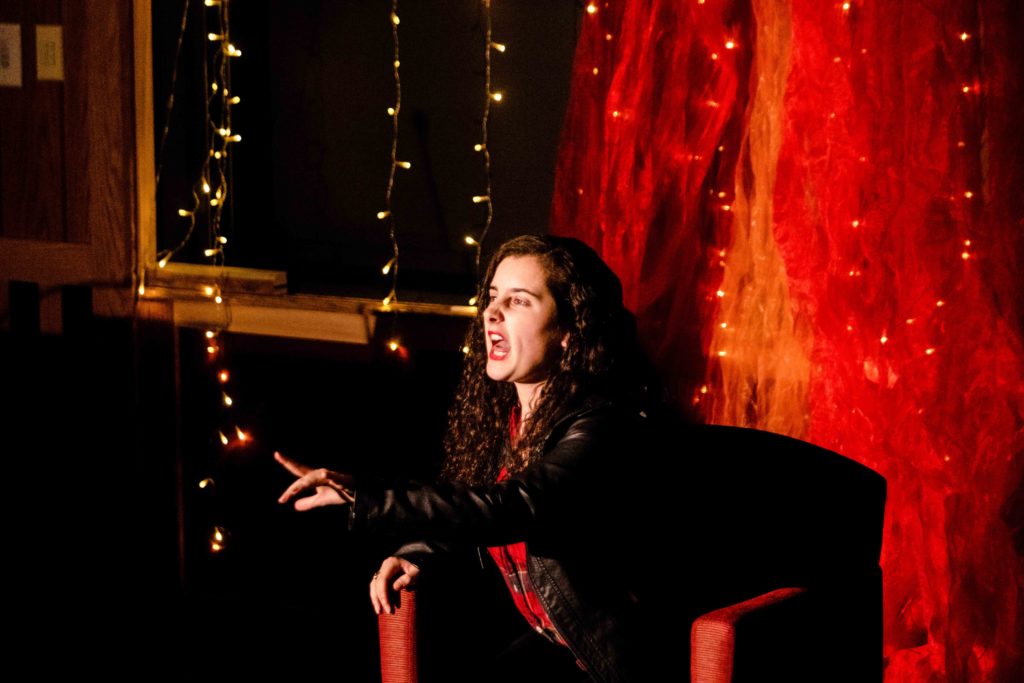 “We were worried about vaginas.”

And so begins the annual Vagina Monologues, a 1996 play written by Eve Ensler based on her interviews with over 200 women surrounding the topics of sexuality, body image, and, well, vaginas. Worldwide, the month of February is dedicated to performing the Monologues and fundraising for the V-Day Foundation, an organization dedicated to eradicating violence against women. At Boston College, the show was held from Feb. 13 to Feb. 15, with all proceeds going to the V-Day Foundation and the Rosie’s Place women’s shelter. The monologue series was co-directed by seniors Meg Ellis and Anabel Johnson, both MCAS ’20.

The mood in McGuinn 121 quickly lightened from the opening line as five cast members switched off sharing various quirky, regional terminologies for the vagina. They even shared a few central to BC, teasing the audience with “Lower Live,” “Eagle All Stops,” and “Agora Portal.” This comedic tone underscored many of the scenes throughout the show.

In “Hair,” performed by Lexie Slotterback, Lynch ’22, a woman raises the discussion of pubic hair as she takes the audience through the story of her marriage to her “first and only” husband. An oversized wine glass and a German-accented therapist added particular flair to Slotterback’s performance. Similarly, “Because He Liked to Look At It” both pokes fun at and acknowledges the male population as a woman, played by Adrienne Vanderhooft, MCAS ’20, explains how an incredibly average man named Bob helped her to appreciate her sexuality as a beautiful part of herself. Vanderhooft demonstrated a gift for the dramatic pause as well as comedic timing, and she served as a standout performer in this year’s cast.

The comedic climax of the evening, however, lay in Catherine Marra’s, MCAS ’22, performance as a female sex worker. Marra’s unfettered theatrics forced the audience into laughter, ending with a particularly impressive full split. The very confidence that Marra—costumed in heeled boots, a leotard, and fishnet stockings—projected is the same confidence the cast was asking its audience to place in the female body.

The Vagina Monologues is as much a piece of theatre as it is social commentary on the role and treatment of women in society. “Beat” addresses violence against transgender women. Daniela Poulat, Lynch ’20, performed the empowering “My Short Skirt,” which denounces rape culture. Debbie Aboaba, the show’s assistant director and MCAS ’21, gave a heartbreaking portrayal of a Bosnian woman routinely assaulted by military officers. A single tear rolled down Aboaba’s face as she rejected any sense of ownership over her body. These skits in particular reminded the audience why exactly The Vagina Monologues must be performed: Those who identify as women are persecuted all over the world merely for being women.

In the show’s finale, “I Was There in the Room,” Holly-Anne Grell, MCAS ’21, portrayed Ensler herself as she describes the miracle of watching her daughter give birth. She remarked, “We forget [about childbirth]. … How else could we not be in awe [of the female body]?” The scene reminded the audience members, both male and female, of how connected they are to the stories that were presented. And at the beginning of the show, the “Vagina Warrior Statement,” performed by Harper Barbaree, MCAS ’21, Devyn Itula, MCAS ’22, and Emma Thompson, MCAS ’23, provided viewers with the tools to honor women and respect their bodies. Declaring that vagina warriors are “an evolving species” that “are everywhere,” the actors stressed allyship and empowerment. To a still, silent audience, they stated that “they are citizens of the world … and are done being victims.” An emotional performance designed to educate and empower, all 35 actresses were “Vagina Warriors” this V-Day.

An additional discourse will be held Thursday by the cast and the women’s and gender studies department. 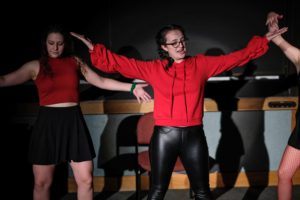