Many Eagles proudly cite Amy Poehler and Doug Flutie as alumni of Boston College, but fewer know that one of the hottest K-Pop stars also attended BC: Eric Nam. When the Korean-American singer and songwriter returned to Boston on Friday night, hundreds of people lined up outside of Royale Nightclub, braving the freezing wind for the chance to claim a prime spot for his concert.

Nam released his most recent album, Before We Begin, in November 2019 and launched his grand world tour in January 2020. Although he was born and raised in Atlanta, he first found an audience in Korea as a K-Pop star. This album is his first body of work with only English songs, and this world tour is the first time Nam has brought his music to so many countries outside of Korea.

Shortly after an opening performance from pop band Frenship, the crowd waited eagerly for Nam to show up. All the lights went out and darkness engulfed the stage. Then suddenly, the stage was lit up by blue. Nam, wearing an orange jacket and holding a microphone in his hand, stepped up to the stage with the first song of the night, “Come Through,” which also happens to be the first song on Before We Begin. The audience roared and sang along.

Showcasing his extraordinary singing and dancing skills, Nam ignited the whole room. He performed several songs, some in English and others in Korean, with perfect ease and confidence. Even during complicated choreography, such as the dance moves for “Runaway,” Nam easily managed to hit all the high notes seemingly effortlessly.

Over the course of the show, Nam charmed the crowd with his approachable stage presence. Eager to welcome his audience, Nam turned the stage into a stand-up comedy show with his unique sense of humor. He joked about his relationship with his Korean mother and how she told him to “get a real job.” As Nam spoke about Asian moms, the relatable stories seemed to close the distance between Nam and his fans. He even sang happy birthday to three lucky audience members whose birthday it was between two of his songs.

Toward the end of the show, Nam brought the audience into a frenzy with two high-energy songs: “You’re Sexy I’m Sexy” and “Congratulations.” These were the two songs that he was the most excited about performing, he later told The Heights. Complex choreography and dazzling stage lights created a fantastic display for his fans and finished the show with a bang.

In a backstage interview, Nam spoke of his love for Boston and how excited he was about coming back to perform.

“It’s always good to come back, and it’s a great wave of nostalgia,” Nam said.

Nam explained that Before We Begin was his way of trying to expand his influence in the United States by releasing an all-English album. As such, the title reflects Nam’s new path forward.

“I just wanted to showcase a big diverse array of music and just give people a taste of what’s to come in the future,” Nam said.

The album’s signature song, “Love Die Young,” is also the most personal song on Before We Begin. Nam wrote it in June 2019, when he was exhausted from touring in Europe. He was afraid that his passion for music would “die young” if he kept overloading.

“Why don’t we write about burn-out and exhaustion? But do it in the form of a love song relatable to love and relationships,” Nam said of the thought process behind the song’s creation.

Nam, who graduated from BC nine years ago, majored in international studies and minored in Asian studies. Nam said he is grateful for his time at BC and that he learned things during college that became useful to him later on in his career.

“During my time at BC, I was incredibly involved in a lot of things,” Nam said.

He was part of the Shaw Leadership Program and the Undergraduate Government of Boston College, and he studied abroad in Beijing for a year. He even wrote for The Heights. Nam said he appreciated the relationships he formed at BC and the creativity and problem-solving skills that he acquired through extracurricular activities.

“I just miss being in college and being able to do whatever,” said Nam.

At the end of the interview, Nam sent his own messages to his fans at BC and beyond.

“In your 20s, do whatever you want,” he said. “Try it, take a risk. Just follow your dreams and your passions. Don’t be afraid. To be healthy, be happy. That’s like the only thing that matters.” 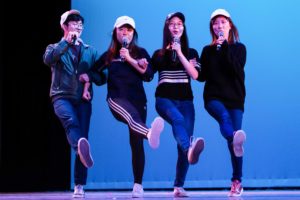