Home » BC Depth Chart: What the Offense and Special Teams Look Like Against Duke 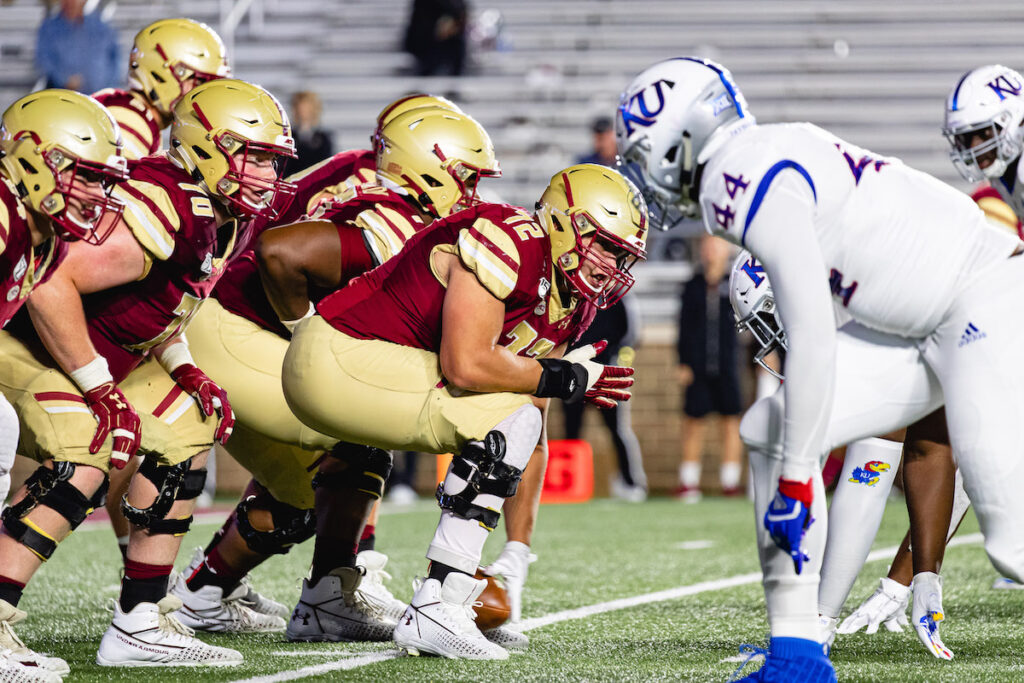 BC Depth Chart: What the Offense and Special Teams Look Like Against Duke

All summer, Boston College football’s 2020 season has been surrounded by questions: Will there be ACC football this fall? What happens to non-conference play? Will there be fans in Alumni Stadium?

In hopes of hushing the public’s interrogation comes the release of the first depth chart of the season, answering some questions but raising even more. Though many of BC’s starters are set to face off against Duke, head coach Jeff Hafley isn’t showing his full hand, forcing the Blue Devils—and The Heights—to cover every option. Here’s how the team is shaping up on the offensive side of the ball: 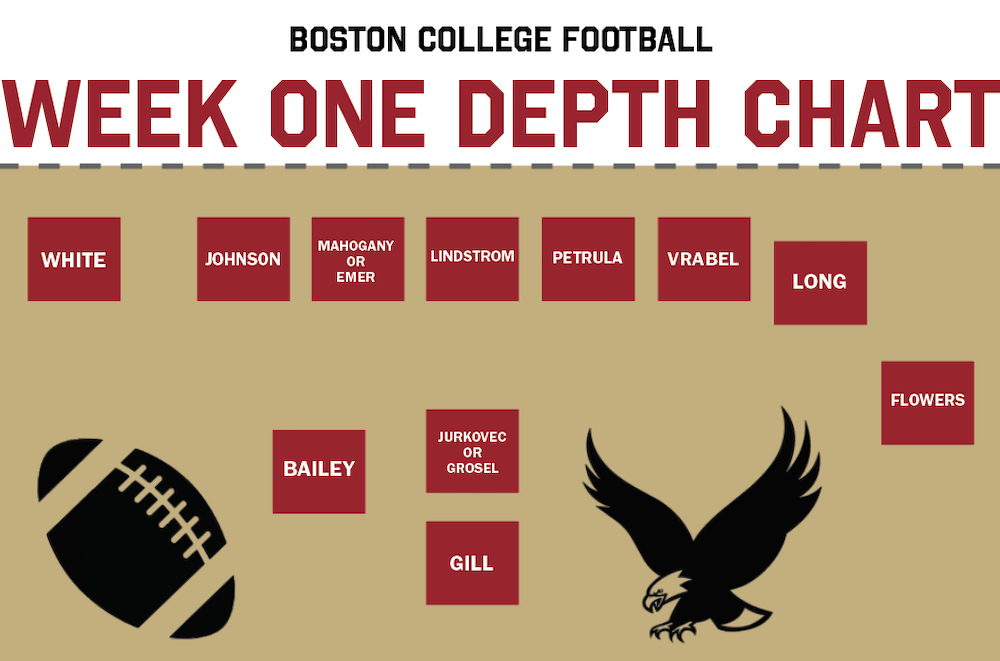 One of the biggest questions ahead of BC’s opening kickoff is about which signal caller will get the starting nod. Both Phil Jurkovec—an offseason transfer from Notre Dame—and Dennis Grosel—a seven-game starter for the Eagles last season—are up for the job, and Hafley has still given no indication of which way he’s leaning. Jurkovec saw the field sparingly with the Fighting Irish, but he performed well as a backup to Ian Book and was heralded as a top recruit out of high school. Grosel, on the other hand, stepped up last season after Anthony Brown went down with a season-ending injury. Last year, he completed just under 50 percent of his passing attempts for 983 yards and nine touchdowns. Over seven games, he ran for two touchdowns and threw just three interceptions.

With the departure of three-year backfield starter AJ Dillon, BC’s offense has a big hole to fill, and David Bailey is just the man for the job. Bailey has played second fiddle to Dillon for the last three years, including a standout 2019 season that earned him an All-ACC Honorable Mention selection. Bailey totaled 844 rushing yards for 148 carries, good for seven rushing scores, one passing touchdown, and one other through the air. Backing up Bailey will be either senior Travis Levy or redshirt freshman Pat Garwo. Last year, Levy was the Eagles’ second leading rusher with 1,059 all-purpose yards. Garwo played just three games before redshirting the season.

One year ago, BC found itself blessed with a four-deep tight end listing on the depth chart, but this year, that number is cut in half. After Chris Garrison, Jake Burt, and Korab Idrizi all graduated, the only returner from last year’s tight end room is Hunter Long, who earned the starting nod for BC’s opening matchup against Duke. The All-ACC Third Team selection notched a team-high 509 receiving yards last year, and he’s returning with unfinished business. Redshirt freshman Spencer Witter will also see playing time in the opener. At 6-foot-5 and 240 pounds, he’s got a similar stature to Long, but as he redshirted last season, Eagles fans won’t know what to expect from him on the field.

Kobay White has been the go-to reciever for the Eagles the last three seasons, and he’s lined up to fill that same role once again this year. He’ll line up at split end again this year after notching a team-high 29 catches. Throughout last season, White built up a connection with Grosel, but with QB1 still up in the air, it’s unclear if the pair’s history will be a factor. Backing up White on the weak side is CJ Lewis, who had a solid sophomore season—he played in 12 games that year—before redshirting his junior year after just four games and two catches.

Zay Flowers made a name for himself as a true freshman in 2019, and to open BC’s season, he’s earned the starting nod for the third time in his career. Flowers is an all-purpose player who racked up 536 yards on the ground and through the air last season. His debut in Week One against Virginia Tech was a sight to behold, as the true freshman notched 116 all-purpose yards on three carries and two catches. Following him on this week’s depth chart is Ethon Williams, who showed lots of promise during camp, highlighted by more than a few one-handed snags on the exterior, according to Hafley. Williams enrolled in January of 2019 and played a supporting role last season, appearing in seven games for three receptions and 56 yards.

Rather than play a two-tight end offense as the Eagles did last year, Hafley will utilize three receivers, and Ohio State transfer Jaelen Gill fills the final spot. Gill saw limited playing time at OSU, but he gets the starting nod after being granted immediate eligibility in mid-July. Jehlani Galloway will fill out the two deep. According to Hafley, Galloway came into his own during camp this summer, earning a spot on the depth chart.

BC’s offensive line is expected to be one of the top units in the ACC, with talent and experience to spare. Left tackle Zion Johnson, center Alec Lindstrom, right guard Ben Petrula, and right tackle Tyler Vrabel are all returning starters from last season, and they’ve got a combined 71 starts between the four of them—90 if you count Johnson’s 19 starts with Davidson before transferring to BC.

Petrula has the most experience of anyone on the O-line, as the 2020 Preseason All-ACC selection has been the Eagles’ starting center since he was a true freshman. Last year, he was named to the All-ACC Second Team. Petrula and Johnson were both recently named captains of the Eagles this year, a testament to the fortitude of the offensive line.

The lone vacancy on the offensive line came at left guard, and that spot is still up for grabs. Hafley listed both Christian Mahogany and Nate Emer as potential starters on Lindstrom’s left side. Mahogany has yet to appear in a game after redshirting his freshman season in 2019, and Emer appeared in 12 games last season, primarily on special teams, so whoever gets the nod will be an unfamiliar face to BC fans.

Should the Eagles face injuries to the offensive line, they have plenty of depth to rely on. Emer is listed as the backup center, and promising redshirt freshman Jack Conley finds his name under both tackle positions. Redshirt freshman Blerim Rustemi will fill in if a vacancy opens up at right guard.

The only rock-solid decision for starters on special teams is Grant Carlson at punter, and the rest of the specialists are left still competing for their spots. BC has long wrestled with kicking problems, even after experienced graduate transfer Aaron Boumerhi joined the team last year. Boumerhi, Danny Longman, and Stephen Ruiz are all vying for the job, and it’ll be a game-time decision for who gets the go-ahead.

On the other side of special teams, Travis Levy, Zay Flowers, and Jaelen Gill are all up for both kick returner and punt returner. Another game-time decision, both position groups include agile runners with plenty of experience. Levy had the starting position locked down for most of last year, but Flowers and Gill have entered the running for BC’s opener.