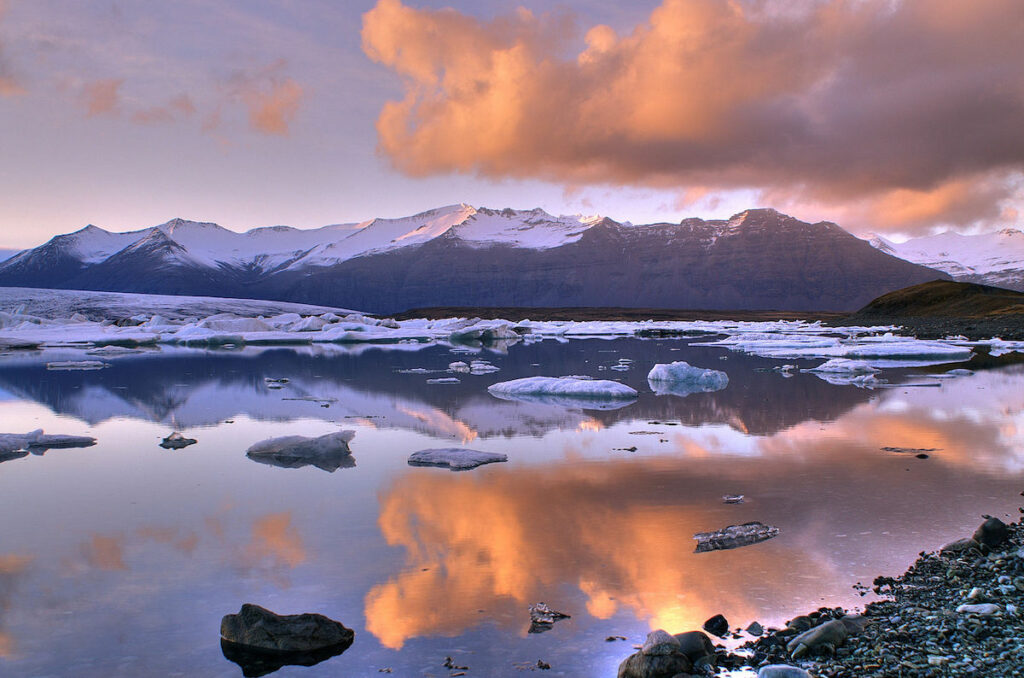 Glaciologist Explores Complex and Changing Relationship Between Humans and Ice

Climate change and the melting of ice might seem synonymous, yet the physical evidence can feel distant.

“We know glaciers all over the planet are transforming, but how does what is happening to them influence people living in Boston, in the Arctic, in Europe, in China, in places where people don’t have glaciers in their immediate backyards?,” said M Jackson, a geographer and glaciologist.

Through her research of the impacts glaciers and glacier movement have had on native Icelandic peoples, Jackson delved into the central role ice plays on human history.

“Can Icelanders still be Icelandic in Iceland without ice?,” she said. “For 1,000 years, to be Icelandic meant to have some connection in part with ice. So, in what ways might historic identity, present identity, future identity of an entire people, how might that shift as the ice shifts?”

Jackson, author of The Secret Life of Glaciers, has researched the impact of glaciers in Iceland, particularly Breiðamerkurjökull, where she spent time delving into the glacier’s recession. At a lecture on Oct. 7 as part of Boston College’s Lowell Humanities Series, glaciologist Jackson discussed the complex relationship between humans and ice, and how with the arrival of climate change this relationship is shifting.

“Where there are glaciers, there are people,” Jackson said. “Just as no two people in a room are ever the same, neither ever are two glaciers. Each glacier here is different, each glacier here responds to climatic changes differently, and each glacier influences the surrounding human community in unique and complicated ways.”

Breiðamerkurjökull is no exception. In years past, the glacier has expanded and receded in a cycle, and people have adapted to its expansion by building their houses on elevated surfaces, Jackson said. Now, however, the glacier seems to be permanently receding, with Jackson describing it as “a backwards march towards gone,” and reactions are varied.

“I’ve walked across farms here with local people who tell me that they are grateful the ice is getting smaller, because that means it can no longer surge forward and flood and destroy farms and families and futures, like it did over and over again for hundreds of years before,” she said.

Jackson also stressed the prevalence of climate change to her work and the urgent need to take action.

“Climate change is still happening and we still have the ability to shape some of those outcomes if we start getting together now,” Jacksonshe said. “That’s the critical part of this conversation that we need to be having.”

Though glaciers seem far removed from individuals’ daily lives, the impact of climate change can be felt everywhere and glaciers prove to be one of the most poignant and obvious symbols of such changes worldwide, said Jackson.

For Jackson, inspiration for continuing her research comes from her drive to uncover more about the past, present, and future relationship between ice and humans.

“Everyday, I put on my countless layers of winter gear: my helmet, my boots, and I go back out,” Jackson said. “Because I can’t wait to find out what else glaciers can tell us [about] what different futures might be possible if we listen.”